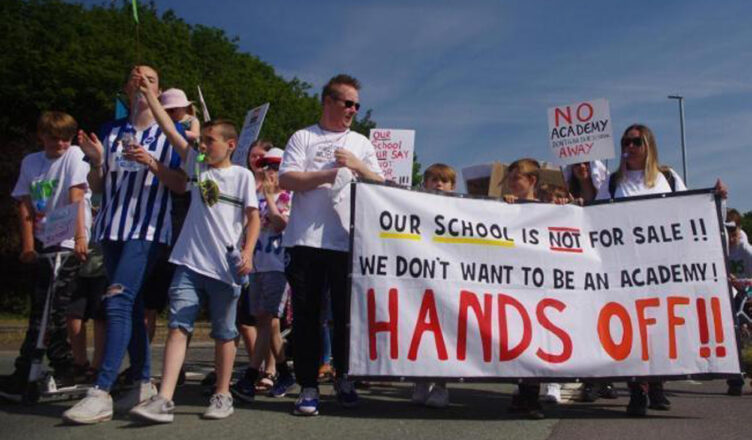 We’ve recently carried an eyewitness report from Glasgow ACG on the inspiring action of Glaswegians in foiling a raid by immigration vans and their attempted kidnapping of two refugees. At the other end of this island, there was another example of what can be done that got a lot less publicity. In a working class area of Brighton, Moulsecoomb, the local primary school was due to be taken over and turned into an academy by the government.

It had been given the lowest possible rating by Ofsted education watchdog inspectors in April 2019. These inspectors included one Timothy Rome. The school is due to be taken over by the Pioneer Academy. In September 2019, Timothy Rome became the regional director of this academy.

The move has been opposed by students, teachers and parents. Parents rejected the move by 96 per cent in a ballot. Teachers and support staff staged a 2 day strike starting on 28th April. The strike days have been supported enthusiastically and noisily by local people.

On 9th May the gates of the school were bolted shut by campaigners to prevent a visit by Pioneer executives. Parents and campaigners blocked the entrance, and after three hours, the Pioneer bosses retreated.

Mason-Ellis tried to sneak into the school on 13th May, but returning to his Mercedes Benz, he found it blocked in by other cars and plastered with campaign flyers. On May 15th hundreds marched in the rain to oppose the move to take over the school. The large demonstration marched from the school to the Level, an open space in central Brighton where demonstrations traditionally start or finish.

The Hands Off Moulsecoomb Primary campaign stated on Facebook that “Moulsecoomb Primary School is being threatened with being forced to become an academy against the wishes of the community again. 96 per cent of parents have said they don’t want it, staff have taken strike action four times to prevent it…”

Moulsecoomb and Glasgow show what can be done. Forget the maggot-infested cadaver of the Labour Party, these are the ways to fight back with mass action on the streets, not the ballot box.