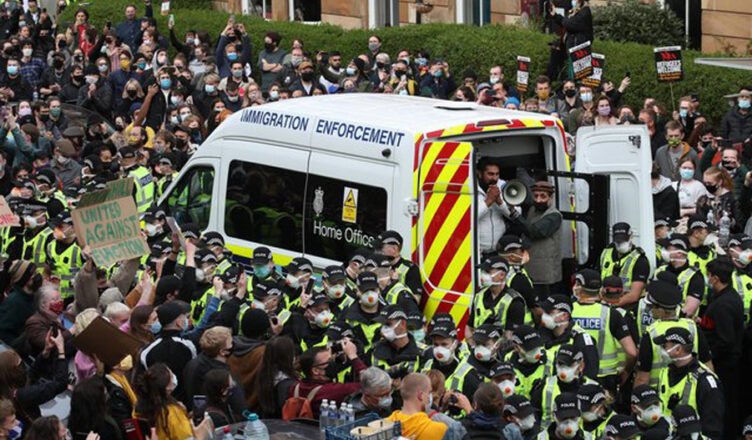 Early this morning (Thursday 13 May), as Muslims in the Southside community of Pollokshields celebrated Eid al-Fitr, Home Office officials arrived in Kenmure Street to enforce Priti Patel’s “hostile environment” and detain two refugees. Neighbours got the word out, and very quickly the community, tenants’ groups, and anti-eviction groups gathered to prevent the UK Border Force Immigration Enforcement van from leaving the street.

Such a remarkable display of mutual aid and solidarity was hugely inspiring to see, and though we played only a tiny part, Glasgow ACG was of course represented.

I arrived late afternoon, having been unable to get there sooner. But the first thing I noticed as I approached was the enormous police presence. Police Scotland cars and vans backed up the street a fair distance. I arrived at the outer police cordon just outside the Zia Ul Quran Centre. The Immigration Van was buried deep in the crowd, and the windows of the overlooking tenements bristled with neighbours and signs. Phalanxes of cops waited around side streets. The many, many logos on display were Police Scotland, rather than Immigration Enforcement. Whatever the spin, the message was clear that this presence was there to support Immigration, not because they feared a wholly peaceful crowd would turn violent. This was a family atmosphere. There were all ages there, from children to pensioners, and the mood was dignified determination.

When word filtered back that the men were being released and cops told us we should disperse, the crowd did not intend to take them at their word. No, we would escort them to a local mosque and ensure their release into the safety of their community. And that’s what happened.

It is a great privilege to see what the people of this city are capable of, and I’m delighted to report that we were successful this time. However, this is sadly not over. We were lucky that the word got out quickly this time, but we need to remain vigilant. We can all take comfort in knowing what solidarity can achieve, though. The working class has learned once more that we can organise in support of each other at a moment’s notice. All that is required is the will.