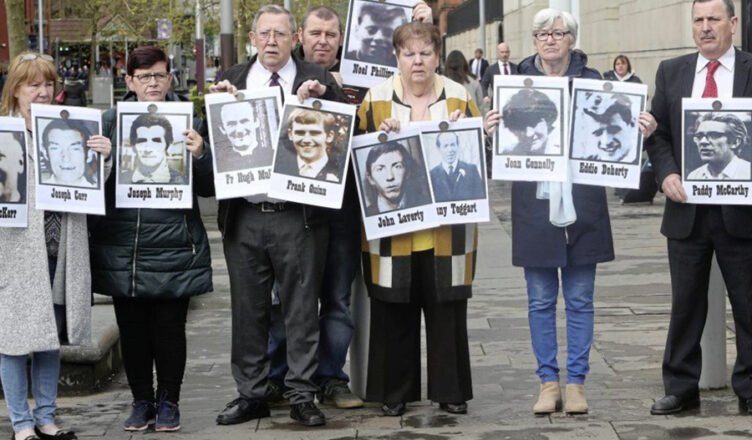 After fifty years the truth is beginning to emerge about the massacre of eleven people in West Belfast by the Parachute Regiment of the British Army.

A coroner has found that nine of the ten had been shot by them, whilst in the case of the tenth, John McKerr, there was doubt as to who had killed him, it either being a Loyalist paramilitary or more probably a British soldier. The coroner found that there was a distinct lack of evidence volunteered by the authorities as regards his death, hinting at the cover-up that had taken place over a span of fifty years.

The families of those murdered have had to wait a half century for this. John Teggart, the son of one of those murdered, Daniel Teggart, went on record to state, “It has taken us 50 years to get to this point. We are just ordinary families from Ballymurphy but we have held the British government and Ministry of Defence to account. We hope today will give strength to all other families. It can be done, don’t give up, you will succeed. These lies end today. We have corrected history today. The inquest confirmed that the soldiers who came to the area, supposedly to protect us, turned their guns on us.”

The massacre took place on 9th August 1971 when six hundred paratroopers surrounded and entered the Ballymurphy estate, smashing down doors at 5am and dragging people from their beds. This coincided with a Loyalist attack on homes in nearby Springfield Park, causing families to flee into the streets.

The paratroopers shot Joan Connolly repeatedly, totally disfiguring her face. She lay on waste ground for six hours, bleeding to death. Another victim of the paratroopers, Noel Phillips, was wounded and then finished off with a shot behind each ear. A local priest, Father Hugh Mullan, was shot at least twice whilst giving last rites to another dying man. Another, Pat MacCarthy, suffered a mock execution, with an unloaded gun shoved in his mouth and fired, resulting in his death by a heart attack.

The paratrooper commanders tried to cover up the massacre by stating that the IRA were firing on soldiers at the time and that those killed were IRA volunteers, when in fact none of those massacred were paramilitaries.

Over the years, a massive cover-up has obscured details of what happened. The original inquest in 1972 returned open verdicts. As a result of families of those murdered getting together in a campaign, the Attorney General in Northern Ireland okayed a request for a new inquest in 2011. These finally opened in late 2018 and finished this March.

One officer implicated in the massacre is now a retired British Army general, Sir Mike Jackson. Five months after the Ballymurphy massacre he was second in command of the Parachute Regiment when it shot dead fourteen unarmed civilians on Bloody Sunday in Derry. Chief of General Staff of the British Army until his retirement in 2006, Jackson was commander of the British Army that invaded Iraq in 2003. At the inquest he gave a grudging, mealy-mouthed apology: “Let me say to the families who so long ago lost their loved ones: for me it’s a tragedy. It’s a tragedy which is hugely regrettable, but I would also say that anybody who loses their lives as a result of violent conflict is also a tragedy. I too have lost friends, so be it. My sympathies to you and I’m sorry that it is only now after so long that you feel you can come to terms.”

Boris Johnson failed to make an apology in Parliament after the findings of the inquest, leaving it to the Northern Ireland Secretary, Brandon Lewis, to do this. Johnson sent a letter to the bereaved families just a few minutes before the announcement in Parliament. The families described this as unacceptable. One of them, Carmel Quinn, saying that Johnson’s description of the massacre as an “event” was appalling. “It wasn’t an event, it was mass murder of a civilian population.” John Teggart went on to say, “General Mike Jackson is considered a hero in Britain, but he was the one who told you that our loved ones were gunmen and gunwomen. The inquest confirmed that the soldiers who came to the North, supposedly to protect us… turned their guns on us. The British government now wants to deny us the chance for justice by introducing an amnesty for these murders.I want to speak directly to the people of Britain at this moment. Can you imagine what would have happened if soldiers murdered 10 unarmed civilians on the streets of London, Liverpool or Birmingham? What would you expect of an investigation? Would you expect justice? Or would you be happy for them to get an amnesty?”

The apologies made by the present government are particularly nauseating and insulting, as we know they are being made by the same establishment that was responsible for the original acts and the subsequent cover ups. And the same State that would do it all again if they needed to.

The Ballymurphy massacre, which happened over two days, is less well known than Bloody Sunday, not least as there was minimal media attention, yet it set the scene for the continued brutality of the Parachute Regiment. As the truth of the British State’s activity in the Six Counties, its collusion with Loyalist paramilitaries and its willingness to lie and obfuscate, is slowly being admitted to, we see revealed the state dripping head to foot in blood.