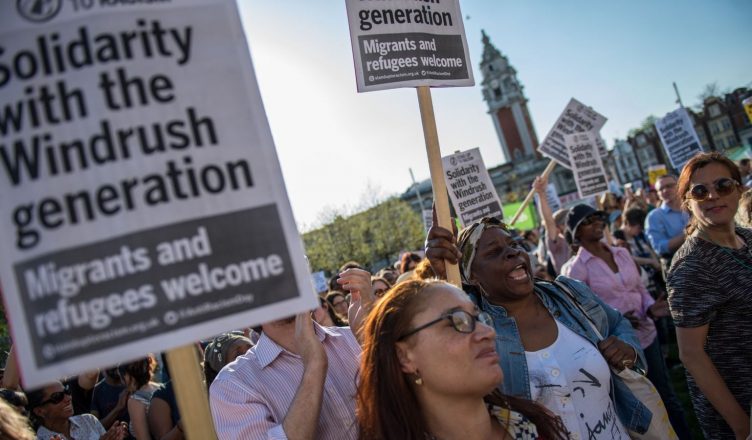 Thanks to Windrush, Amber Rudd has fallen. She became the necessary sacrifice to save the Theresa May government. She has been replaced as Home Secretary by Sajid Javid, the first Black, Asian Minority Ethnic member to sit in one of the three most important positions within the State.

Rudd was forced to resign because she was caught lying about targets for deportation and to save Theresa May herself, the previous Home Secretary.

In 2016 almost 40,000 people were removed from the United Kingdom or left “voluntarily” after receiving threatening letters. Many others have been detained at ferry terminals and airports and sent to another country under the “deport first, appeal later” process. In addition, at least 10,000 others have waited for more than six months for decisions on claiming asylum and because they cannot work, live on an allowance of £37.75 a week, which reduces them to extreme circumstances.

This hostile environment, this intimidating atmosphere did not originate under Rudd and neither did it under Theresa May. We have to go back to the Labour Party under Blair for that. In fact “hostile environment” was first used as a term in February 2010 in a Home Office report which said: “This strategy sets out how we will continue our efforts to cut crime and make the UK a hostile environment for those that seek to break our laws or abuse our hospitality.” This was the Home Office presided over by Labour Home Secretary Alan Johnson. He gloated over the destruction and clearance of the “Jungle camps” by the French authorities in 2009. When asked in Parliament “Would you deport a family whose children know no home other than the United Kingdom?” Johnson replied: “It is not my personal job to do the deportation. If that was the judgement, having gone through due process, then yes”.

It ended up with the Labour election campaign of the same year with the slogan “Controls on immigration. I’m voting Labour” on mugs and badges. And only 18 Labour MPS (including Corbyn and Diane Abbott) voted against the Immigration Act in 2014.

The hostile attitude to immigrants continued under the coalition government with the nodding complicity of the Liberal Democrats and then under the Conservatives ruling alone. Rudd escalated the policy as she had promised to the previous Home Secretary and now Prime Minister Theresa May. This was all done knowingly, with an awareness of the terrible consequences for so many working class families.

The destruction of thousands of documents related to Windrush incomers also points to a hostile environment, making it more difficult for people to prove their status.

Labour’s Shadow Foreign Secretary Emily Thornberry backed the checks on people looking for jobs, homes and healthcare, which were brought in by the 2014 Immigration Act. She defended Alan Johnson by saying that “The words were used but the culture was not!!

We should also recall that after the referendum on the EU in 2016, Corbyn stated on several occasions that immigration controls would remain in place under Labour. Diane Abbott went on to state that Labour did not condone an amnesty, and when questioned, remained silent on what Labour would do about illegal immigrants.

So far, the controversy has centred on Windrush migrants but already tens of EU citizens have been refused permanent residence. We should resist the attempt to divide people into “good migrants”, those who emigrated to Britain from the Commonwealth from the 1940s onwards and “bad” migrants, those from the EU. In particular Boris Johnson is pushing this line with his hard Brexit politics which envisages the re-establishment of better relations, both economic and trading with the Commonwealth countries.

So will the appointment of Javid make a blind bit of difference? The answer is a categoric NO! Many residents of the UK are under the illusion that they have the right to live in Britain. They are kept in the dark about the need to apply for “settled status” whilst others under threat include all those family dependents like children and the elderly who believe that other family members are UK citizens just because they live here!

Javid will change the language from emphasis on targets and deportations but in fact it will be business as usual. He has already been caught out after denying that any members of the Windrush generation had been illegally deported. In fact, this went beyond them and included someone originally from Somalia who was a legal British citizen. The head of Home Office Immigration, Hugh Ind, admitted that such illegal deportations had taken place and said he did not know why Javid and the immigration minister, Caroline Nokes, claimed to be unaware of this.

It should be remembered that in the past Sajid Javid has supported every aspect of the “hostile environment” policy including voting to extend powers to deport before appeal on human rights grounds.

Meanwhile members of the Windrush generation are excluded from Britain after having gone away on holiday, are interned in camps like Yarl’s Wood, are illegally deported and are harassed with threatening notices and denied work and access to health services after checks. Some have lost earnings because their employers sacked them after immigration checks.

At the same time we heard of the women who went on a hunger and work strike at Yarl’s Wood after being detained there indefinitely. In response to the strike they were issued with letters threatening them with accelerated deportation if they continued with their protest. This was all condoned and enacted by Caroline Nokes.

Capitalism and the State use racism and xenophobia to divide and weaken us. We should resist the increasing levels of racism and xenophobia that both the May regime and the mass media are peddling. We should argue against the false divide between “deserving” and “undeserving” migrants. We should mobilise against the “immigration removal centres” like Yarl’s Wood run by companies like Serco, where conditions are appalling and detainees are treated abysmally, and we should fight for the closing down of these centres.

The treatment of the Windrush generation is appalling but we can’t just say that and forget about those who have not been here for as long who are suffering the same treatment. We should not draw any difference between which refugees and immigrants we show solidarity with.

Oppose All Borders! For Internationalism!