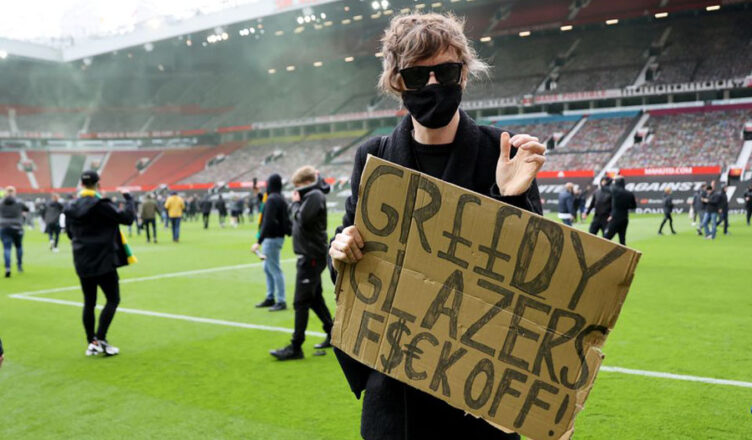 The invasion of the pitch at Old Trafford on May 2nd at the Premier League match between Manchester United and Liverpool was unprecedented in British football history. It was the first time that a game has been postponed due to action by fans in the entire history of the Premier League.

The direct action carried out by Manchester United supporters was a continuation of the protests that led to the collapse of the European Super League (ESL).

Manchester United supporters have long been unhappy with the ownership of the club by the Glazer family, American billionaires who purchased it in 2005.

Disgust and anger at the plans for the Super League ignited the protests on Sunday. Supporters gathered on the Old Trafford forecourt that day whilst others protested outside the Lowry Hotel where the United team was staying in the runup to the match. By the time the protest started at Old Trafford the numbers had risen to thousands. Two firecrackers were set off and the supporters began to march towards the Munich tunnel. Fences were broken down and hundreds of fans swarmed the pitch. Flares were let off and protestors began clashing with the police. The fans occupying the pitch were eventually evicted by the police, but antagonism against the police, broke out on the forecourt. As a result the Premier League, Trafford Council and Manchester United and Liverpool clubs made a joint decision to postpone the match.

The Glazers have failed to invest in the club, and the stadium is in a state of disrepair, whilst the land around it is undeveloped. Meanwhile they have paid themselves dividends of tens of millions of pounds over the period of the last 16 years. They intend to hang on to ownership of the club, calculating that they can double the current value of Manchester United to £7 billion, even after the demise of the Super League.

“On the back of the indefensible ESL proposals, and an ‘apology’ from the Glazers which we do not accept, we need to give fans a meaningful share in the ownership of United and a meaningful voice in how it is run… What happened was the culmination of 16 years in which your family’s ownership of the club has driven us into debt and decline, and we have felt ever more sidelined and ignored. After 16 years not one member of the Glazer family has ever had so much as a conversation with us, the club’s Supporters Trust”.

As ‘Corkman’, writing on the Football Lads and Lasses Against Fascism website said:

“Football in Britain has been completely taken over by finance capital; ticket prices have gone through the roof, as those in charge couldn’t give a f**k about the fans or teams that were for generations of massive importance to communities, towns and cities. The game people love has been hijacked and big business now only cares about marketing a saleable product to those with money. Like everything else, it is something created by ordinary working people and now stolen off us by the rich. Well done to those fighting back at United and to the fans up and down the country who are sick of being taken for granted and want accountability and democratic control of the game. It’s time for a movement that will bring football back to the people”.