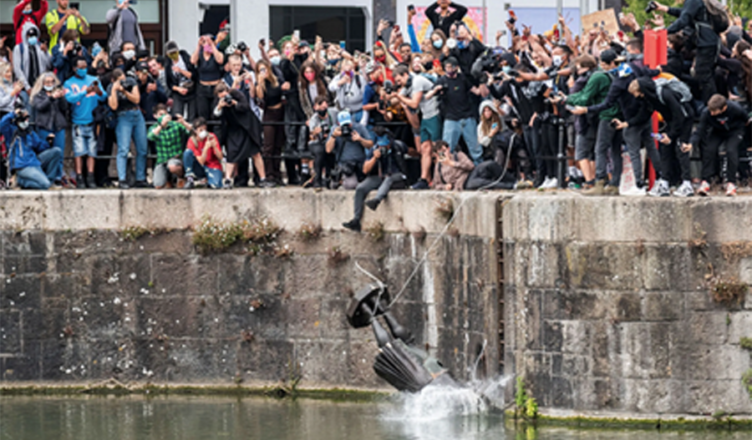 Remember when the Bristol statue of infamous slave trader, Edward Colston, was toppled and dumped in the harbour during the 2020 Black Lives Matter protests? It was indeed an historic and iconic moment which raised a cheer, not only here in the UK but across the globe.

Well, four Bristol defendants are now facing the possibility of serious jail time, having been accused of this righteous act of anti-racism.  Clearly, the culture warriors of the Johnson regime are keen to settle scores here, and the comrades charged with dropping Colston’s rusting metal arse into the harbour will be needing our support.

It’s been estimated that the costs for their defence will be at the very least £12,000. So with this in mind, a Gofundme campaign has now been set up. So please donate! Here’s the link: 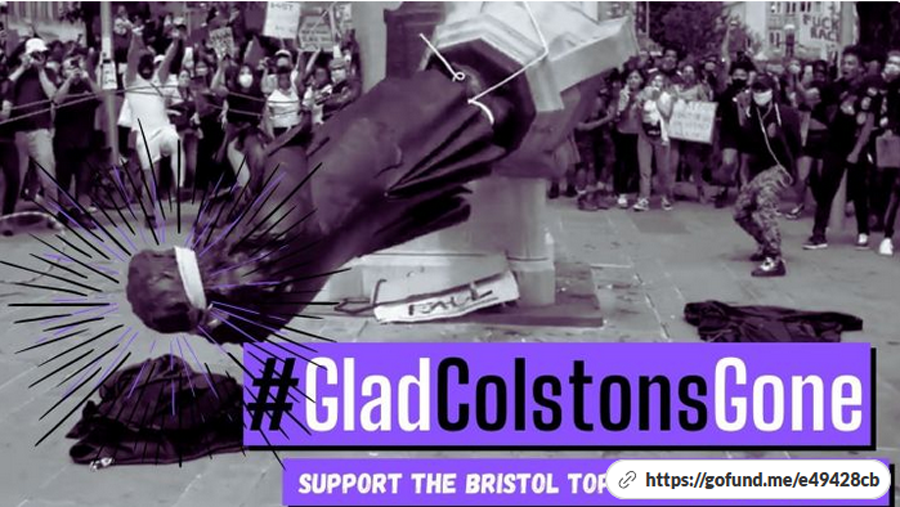 From the #GladColstonsGone Gofundme page…

On 7th June 2020, ten thousand people in Bristol succeeded where countless petitions,  articles and other public objections had fallen short, removing a century-old public tribute  to racism and slavery. For toppling the Colston statue, four of the ten thousand have been  singled-out to face criminal damage charges and need our support before they go to trial  later this year.

As fury over George Floyd’s murder in Minneapolis weeks before united people around the world against systemic racism and police brutality, the Bristol action highlighted the links  between the city’s racist past and present. The historic oppression of Bristol’s working  class by the local wealthy elites, state & police, has in recent times focused  disproportionately on people of colour through discrimination, racial profiling, and violence. This structural racism can be traced back to the white supremacist nature of the  transatlantic slave trade, and its profits – from which the local white merchant elites built  their own and Bristol’s wealth.

The toppling of the Edward Colston statue was a cathartic piece of non-violent direct  action that rippled across the globe, igniting debates around racism, slavery and what we  consider to be our ‘heritage’, as well as prompting many more local organisations in Bristol (from institutions to buildings to street names) to drop the Colston name for good.

The four protesters facing charges are due to appear at Bristol Crown Court on the 13th  December 2021 for a jury trial lasting up to eight days. That means hefty additional legal  costs, along with lost income and other expenses that we hope the rest of the ten  thousand people who brought the Colston statue down, and supporters around the world,  will ensure are covered.

How can Bristol hope to address its ongoing racial inequalities, if a slave trader is still  venerated in the heart of the city? The toppling was a justified and necessary action that  we believe the vast majority of Bristol stands behind. Despite the fact that calls to drop the  charges are ongoing, it is likely the four will still have to stand trial.

If you are #GladColstonsGone, please donate and help spread the word!

Your donations will go towards, in priority order:
– Legal fees not covered by legal aid (estimated at £12,000).
– Covering loss of earnings sustained as a result of attending court.
– Any travel costs related to court case.
– Any other costs related to the court case.
– In the event that there are funds remaining, they will be donated to
local black-led anti-racist & community groups.