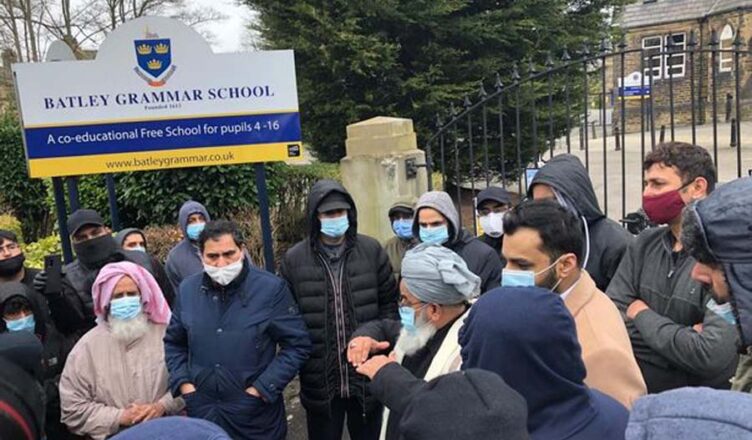 Support for the progressive side of the debate in Muslim communities

You may have heard of the controversy over the teacher suspended at Batley Grammar School in West Yorkshire. There are conflicting reports, but we are told that a teacher showed an image of Muhammad as part of a religious education lesson. Some claim it was a cartoon, some claim it was specifically a Charlie Hebdo cartoon, others that it was the Danish cartoon of Muhammad with a bomb in his turban. Children at the school have started a petition to reinstate the teacher, stating that the image was shown in the context of a lesson about racism and blasphemy, and that the intent was to counter discrimination and intolerance.

Maryam Namazie, British-Iranian human rights campaigner, calls those at the school gates “The Islamist rent-a-mob that converge on schools to feign insult when the real insult is mob rule at school gates and threatening teachers”. She and others identify the ringleaders as traveling reactionary troublemakers.

Meanwhile, Muslim cleric, Muhammad Manwar Ali, CEO of JIMAS, a Muslim educational charity, and Chaplain of Ipswich & Colchester Hospital says, “I declare myself free of all statements made on behalf of Muslims by any imam or Muslim politician about the disgraceful protests outside the Batley Grammar School and mob demand for dismissal of the suspended teacher. None of them represent me or speak for me on this issue”.

This displays a range of views within British Muslim civil society. Why, then, do liberals insist that the “authentic” voice is the reactionary one? There is a debate, but liberals seem intent on backing only the far right Islamist side of it instead of the progressive side of it. Progressive Muslims like Muhammad Manwar Ali says the voices of reaction do not speak for him. Who are liberals to insist he is wrong?

Referring to the charge of blasphemy brought by the protestors, British Ex-Muslim human rights activist, Ali Malik, points out that “Many around the Islamic world are given death sentences, lynched, and attacked for this non-crime regularly”. Surely, in our struggle against oppression, anarchist communists should be siding with the oppressed, with gay voices, feminist voices, secularist voices, apostate voices?

In a piece entitled “Islamic Homophobia is Empowered by Leftist Silence”, published by the Council of Ex-Muslims of Britain, Gay Ex-Muslim, Jimmy Bangash writes: “In Muslim communities, homosexuality is intrinsically linked to anxiety, intimidation, violence, and, in some cases, death.”

We need to amplify those voices, not the ones Maryam Namazie calls the “fascists (who) gather at school gates to intimidate schools and educators”. Pointing out that in France, the teacher Samuel Paty was executed as a result of a false accusation made by a pupil who has now admitted she wasn’t even in the class at the time, Namazie goes on: “here they threaten a teacher. But the teacher is suspended? When the school carries out their threats for them, where does that leave civil society?”

To answer Namazie’s rhetorical question, it leaves civil society as an enforcer of reactionary values. Swiss-Yemeni academic, Elham Manea, has been following the Batley story. For her, “Safeguarding Freedom of Expression is not a luxury. It has a crucial function for any functioning democracy. The problem does not lie in the exercise of freedom of expression but rather with those who are curtailing it in the name of religion and culture.” And among those curtailing it are now numbered liberals and civil society. This is a dangerous position to be in.

We must of course oppose anti-Muslim racism and discrimination, but somehow liberal society has begun to think that an offence to reactionary sensibilities trumps the voices of gay people, feminists, secularists, apostates within Muslim communities. Reactionary people are offended by equal marriage, by homosexuality, by apostasy, and as anarchist communists we should be saying, that’s hard luck. They must then be offended. The voices we want to amplify are those who are oppressed, not those who oppress. Our solidarity is with those who are at real threat of hardship, up to and including death, and insisting on only hearing the reactionary side of the debate condemns those people to suffer in silence. And in exchange for what? Academic and commentator, Kenan Malik, points out that the prohibition on depicting Muhammad is neither universal in Muslim thought now, nor was it historically a majority opinion. Once more liberal opinion has reinforced and shored up only the reactionary side of the debate. This trend must stop, and as anarchist communists, we must ensure that we do not assist in closing down debate within Muslim communities by siding with the voices of reaction by declaring it the only authentic voice to be heard. We are with feminists, gays, secularists, apostates. We encourage the debate and we back the progressive side in it.