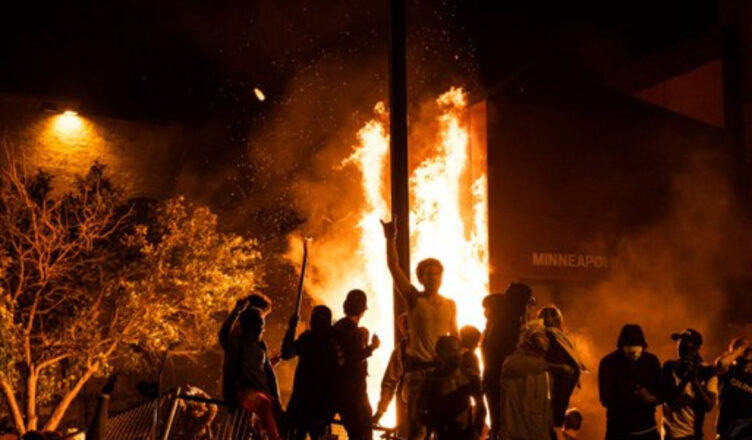 We re-post this 29th May report from the website It’s Going Down.

Over the last two days, continued rioting, looting, and clashes with police have intensified in so-called Minneapolis, following the police murder of George Lloyd on Monday. On Wednesday, one protester has been shot and killed. County prosecutors on Thursday afternoon stated that they would not proceed forward with charging the officers involved in [Lloyd’s] death at this time, only adding to the growing anger on the streets.

As one report wrote:

During a Thursday afternoon press conference, Democratic Mayor Jacob Frey attempted to placate protesters and pleaded with them to “be better than we have been.” Minneapolis Police Chief Medaria Arrodondo joined in the plea to restore order in the city. “I know that there is currently a deficit of hope in our city… But I will not allow anyone to continue to increase that deficit by re-traumatizing those folks in our community.”

Popular anger was further stoked Thursday by the comments of the prosecutor who has jurisdiction over the case, Hennepin County Attorney Mike Freeman. He told reporters that there is “other evidence that does not support a criminal charge… I will not rush to justice.”

Freeman is responsible for the decision not to bring charges against the officer who killed Jamar Clark in 2016, sparking days of protest, as well as the more than half a year delay in deciding to charge and arrest the officer who shot and killed Justine Damond in 2017.

Rioting and looting continued to spread as it had the night before – into neighborhoods away from the initial epicenter and then into nearby St. Paul. On Thursday, as smoke still rose from burned out corporate stores such as Target, thousands of people took to the streets in Downtown Minneapolis in solidarity with George Floyd, as fresh clashes broke out with police and more stores were looted. Posts on social media also show liberated goods been distributed in the Target parking lot close to the 3rd police precinct, which has become the de-facto epicenter of the rioting.

As the afternoon wore on, people gathered outside of the precinct, as clashes with police continued. These running street battles escalated as rioters broke into the building, finally forcing police to flee in their vehicles. Once the building was empty, people then began to loot it and then set it on fire. What followed was a festive, party-life atmosphere for several hours while the precinct burned.

This victory over the police by thousands of people taking sustained action daily in the face of massive police violence, mainly young zoomers and millennials, represents a historical moment. As expressed in hours of interviews conducted by Unicorn Riot on the ground in the midst of the uprising, the revolt is not coming from the activist Left, nor from “progressives” or “liberals,” but instead from the local base of proletarian youth in Minneapolis. While the uprising has had a very multi-racial character, across the board there is an understanding that the entire anti-Black system of racialized capitalism must be destroyed.

As night wore on, solidarity demonstrations were kicking off across the so-called United States. Anarchists organized solidarity demonstrations and marches in Portland and Olympia, while students in Oakland blocked a freeway entrance. In Sacramento, street marches took place, while riots broke out in Fontana, which broke windows at City Hall. Meanwhile in Los Angels, two days of protests were organized, with people on Wednesday blocking the 101 freeway; busting out the windows of a police car that attempted to drive into demonstrators. Finally in Phoenix, rowdy street marches gave way to riots, as people lobbed rocks at the Phoenix Police Department.

More riots and clashes with the police continued in Denver, where people fought with police and blocked a freeway, while in Columbus, riots in the street soon led to mass vandalism of the Statehouse. Street-fighting also took place in Louisville, Kentucky, while in New York, clashes with police led to multiple arrests. In the evening, Trump took to Twitter to call protesters “thugs” and announced the arrival of several hundred National Guard troops on the streets of Minneapolis, whom he claimed would potentially open fire on looters.

What follows is a roundup of solidarity protests and riots from across the so-called United States. For a list of upcoming protests and demonstrations, go here.

Portland, OR: Protest and occupation outside of so-called Justice Center continues into second day. At night, street march launched; blockades of streets.

Fontana, CA: Clashes with the police break out after protest takes to the streets. People begin throwing rocks and bottles at police. Windows broken at city hall.

Denver, CO: Street marches turn into riots; police shoot out gas to clear people from blocking freeway. Vigilante driver runs into crowd; reports of a shooter firing off several shots, no one hit.

Oakdale, MN: Protests continue outside of the home of Derek Chauvin, the former police officer who killed Georgy Floyd. Several arrested over past few days.

Minneapolis, MN: Mass street protests flood downtown; clashes with police and looting continues; fires are re-start, rioters are able to push police out of the 3rd precinct and police evacuate; precinct is set on fire. Thousands party in liberated zone. National guard arrives to mostly clear out streets after Trump issues vague threats of the military opening fire on looters.

Ferguson, MO: Protest outside of police department in solidarity with George Floyd

Penascola, FL: Protest and rally in solidarity with George Floyd.

Memphis, TN: Two nights of rowdy marches which take the streets in solidarity with the Minneapolis Uprising; blocks streets. Attempted disruption by neo-Confederate.

Louisville, KY: Riots break out in the streets; street fighting with police; barricades and shields utilized by rioters. At some point there was as shooting which injured 7 people, one person critically. Rioters marched in solidarity with George Floyd as well as Breonna Taylor, who was killed by police in March.