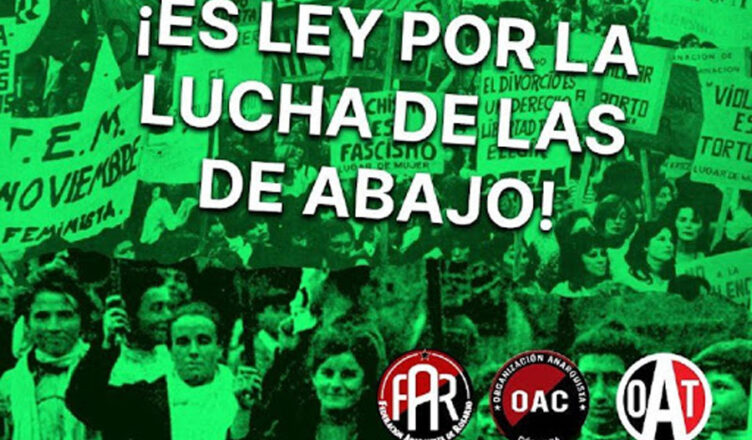 We republish the following from Argentinian comrades:

Abortion has finally been legalised in Argentina, after years of fierce struggles that have made the Argentine feminist movement one of the engines of the struggle against patriarchy at the global level.

The green tide which has not stopped growing for years in Argentina and Latin America was able to celebrate yesterday (24th January) the approval of the law on the voluntary termination of pregnancy. This is an essential demand for all women and those likely to give birth in our class, because it is the poorest among us who abort in the worst conditions of clandestinity, and thus risk serious health problems. prison and death. This historic struggle gave the green light to the force of women from below across the continent to advance the right to live, a fundamental right if there is one, and not just the right to survive as imposed by the machinery of capitalism and its destructive voracity.

At dawn on December 30, the Argentine Senate finally had to give its final approval to the law on voluntary termination of pregnancy after years of social pressure from the feminist movement, political parties, unions, organizations. social and student. As well as by the social group of women and people likely to give birth, in street demonstrations, in the now historic National Meetings of Women, renamed since Plurinational Meetings of Women, Lesbians, Trans, Transvestites and Non-Binary, as in all workplaces, places of study, neighbourhoods, through constant investment in debate and the fight for the autonomy of our bodies and for our right to decide.

Since the end of the XIXth century in this region, our anarchist comrades gathered and organized the foundation of society, with their sisters of the working class, to build a history of resistance against patriarchy and capitalism. From Virginia Bolten with La Voz de la Mujer, María Collazo, Juana Rouco Buela, Luisa Lallana, Julia García among many other comrades; to those who faced brutal repression in the 60s and 70s: Elsa Martínez, María Esther Tello, Hilda Forti, Pirucha Ramos among others. All are part of the great history of feminist struggles in this country which today manages to wrest the legalisation of abortion from the political class thanks to the immense organization and mobilization that the Campaign for legal, safe and free abortion, created in 2003, encouraged.

There is no doubt that the government of Alberto Fernandez, and much of Peronism, will attempt to gain political profit from this fact, as can already be seen in speeches which present this law as a gift of the “political will” of officials who administer the patriarchal state. Even more cynical is the progressives’ attempt to constantly come to terms with the more reactionary, conservative and sexist sectors such as the Catholic and Evangelical churches, by having negotiated a project that includes a conscience clause and the attempt to negotiate grounds for legal abortion. While it is a great joy to know that the health care system will now be required to consider the decision of pregnant women when they terminate or continue a pregnancy.

There is still a long way to go to ensure that legal, safe and free abortion is actually implemented on every street corner. It remains to fight against the conscience clause, the legal traps that may arise and the obstacles that these reactionary anti-choice sectors will want to put in place. And of course, there is a long way to go to end all forms of patriarchal violence.

We therefore understand this necessary step as part of a process of struggle which is not exhausted and will not be exhausted in the near future. Seeing the results of our constant organisation, for decades, reaffirms the path of collective, sustained, united and class action. We know that nothing truly transformative will come from the State and its structures, but this necessary step forward allows us to see the realisation of new demands on the horizon.

As politically organized anarchists, we understand that the only possible path in this period is to organise and fight for increasingly important demands for the oppressed until this capitalist and patriarchal system can be changed at the root.

Thus, the legalisation of abortion is a victory that is the fruit of historic mobilisations, assemblies in neighbourhoods, organized teachers who implement comprehensive sexuality education in schools, thus transforming classrooms into places of learning, information, empowerment and discovery; of the union and student organization, of the thirty or so meetings which are today multinationals of women, lesbians, trans, transvestites and non-binary people.

It is a conquest for women and gender minorities of the working classes thanks to popular struggle and committed and constant activism allowing them to resist the harshest blows of governments and capital. We deserve to celebrate all this immense fight against going underground, to strengthen and consolidate ourselves for the battles to come. We claim this path of building the power of the people, with the strength of our ancestors and our history of struggle. With the power we have from below, the marginalized, the exploited, the oppressed, to build our own destiny and end patriarchal, colonial and capitalist oppression. For socialism and freedom.

IT’S THE STRUGGLE OF THE OPPRESSED THAT PERMITTED THE LAW!

LET’S CONTINUE TO ORGANISE OURSELVES IN THE STREET TO FIGHT AGAINST PATRIARCHAL AND CAPITALIST OPPRESSION!

STRENGTH TO THOSE WHO FIGHT!