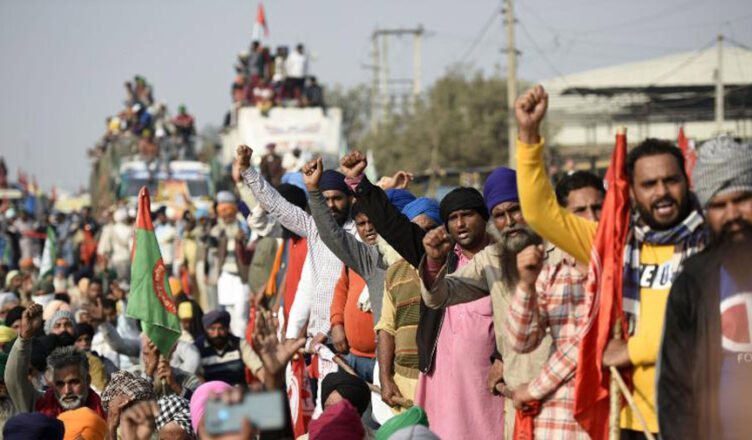 Hundreds of thousands of farmers, many driving tractors or riding horses, converged on the Indian capital of New Delhi on Republic Day, January 26th. This was in response to the decision by the government led by Narendra Modi, to impose laws that threaten the existence of many poor farmers. The economic liberalisation proposed by the Modi regime involves three laws that open Indian agriculture to the big agri-businesses, which will deprive small farmers of their livelihood. Modi thought that the farmers would take this lying down, but they have mobilised on a massive scale, and have demanded the repeal of the laws and the maintenance of a minimum price support for agricultural produce.

Despite massive police repression and extreme cold, farmers have massed on the outskirts of New Delhi for two months. Republic Day is when the Modi regime undertakes a massive military parade, exhibiting all its latest hardware, and makes threats against neighbouring Pakistan and now China. However, all the thunder of this vile spectacle was taken away when the farmers crashed through steel barricades and braved water cannons and the brutality of the police thugs. They seized the old building of the Red Fort and ran up their flags there. Despite the use of tear gas by the cops, they were swept aside by the mass of the farmers. Elsewhere in India, there were many other protests, including in Mumbai.

The far right Hindu nationalist government of Modi has been an ally of Trump. The attack on the farmers was just one of the measures carried out against the Indian masses. Modi and his cronies want to compete with China for provision of cheap labour and introduced a programme of economic restructuring, a full-on attack on the working class, stamped with approval by the International Monetary Fund. In response, workers demanded that the hundreds of millions who have been made unemployed or lost wages be financially supported by the government. Two one-day strikes involving tens of millions, the greatest general strikes in human history, took place in 2020.

The Modi government has handled the pandemic crisis in a disastrous way, with at least 150,000 deaths (although the actual figure is much higher). Modi and Co. are now terrified that the great movement of farmers will trigger further industrial unrest and sweep them from power. We in the ACG sincerely hope this happens, and look to further developments in the struggle in India.