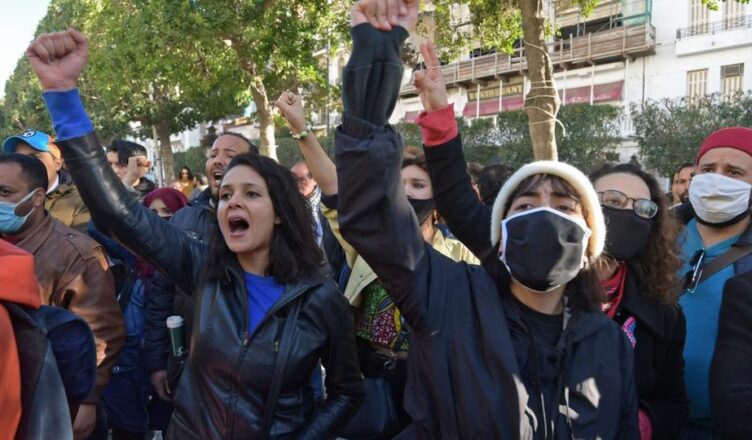 Trouble has been brewing for a considerable time in Tunisia. The ten years since the ‘revolution’ which overthrew President Zine El Abedine Ben Ali have seen very little change for the vast majority of the working class. The hopes of 2011, part of the so-called Arab Spring, have been buried under mass unemployment and a social security system that sees many workers impoverished. And the working class is fighting back.

The beginning of the year saw strikes by teachers opposed to the government’s imposition of face to face teaching despite increases in cases of Covid-19. The state responded with a curfew on the 14th January, anniversary of the overthrow of the old regime. The response to this manipulation of the Covid crisis for repressive ends (the virus has been increasing steadily since the first week of December) was rapid as working class areas of the cities of Sousse, Kasserine and Nabeul exploded in rioting aimed at the police and forces of repression, with police barracks being firebombed. Fuel was added to the flames when a viral video circulated showing cops in the rural town of Siliana brutally beating a farmer whose sheep had wandered into a government building. The uprising spread to the working class areas of the capitol, Tunis, not least after a police attack on celebrating football fans. As the revolt has spread, so have the arrests and by the 23rd of January between 1,500 and 2000 have been incarcerated, with the army being brought onto the streets.

However, the movement in the streets has continued to spread, led, overwhelmingly by working class semi-employed and unemployed youth. The Tunisian union confederation UGTT, whilst acknowledging the legitimacy of the anger, condemned the property destruction and resistance to the police and army, condemning acts of ‘criminality’. The government and various civil bodies have warned of ‘Islamist’ infiltration, domestic and ‘foreign’, using the uprising to further their own ends. Whilst Tunisia has its Salafist parties and groups, they remain marginal and their influence is presently minimal. The threat of Islamist manipulation of events is mainly used to create confusion and undermine the movement. Demonstrators in Tunis, calling for the release of the imprisoned, have chanted “No Police! No Islamists!” whilst crowds in the capitol chanted slogans for social justice and a new revolution.

Naturally, there has been minimal coverage of these developments in the western media. The uprising is, in part, sparked by the imposition of an austerity budget on January 1st. The International Monetary Fund has said Tunisia “currently faces dual challenges of saving lives and livelihoods until the pandemic wanes, while trying to bring fiscal and external imbalances back to a sustainable trajectory.” Translated, that means the Tunisian working class will have to be gently ground into the gravel. But the revolt shows that Tunisian proletarians have something to say about that. The hope must be that the spark in Tunisia will spread across North Africa and beyond, and this time, the revolution will bring lasting change that cannot be reversed.