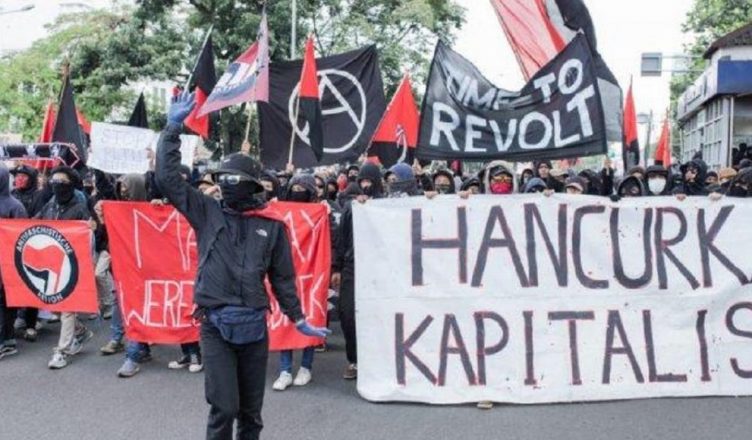 Here is an update about the situation in several cities taken from https://mpalothia.net/indonesia-post-may-day-update-and-call-for-international-solidarity/

In Bandung, there was a peaceful action by a group of anarchists almost 1000 strong. It even consisted of mothers, children and teenage girls. Police attacked them and broke the bloc into two groups. They were then chased, beaten and arrested. The pretext for this was ‘vandalism’, some spray-painted graffiti. Many of those who were arrested were stripped and had their heads shaved. Some were spray-painted on their faces and bodies as well. Many were forced to crawl along the road in their underwear. In total 619 anarchists were arrested, of these, 3 still remain in custody for destruction of property.

In Jakarta, there were small clashes between anarchists and police who were blocking the road. Anarchists attacked a police blockade so that a huge group of trade union members could continue their journey to a gathering point where thousands of people were assembled. An anarcho-syndicalist union in Jakarta is now being targeted by the police.

In Malang, one person was forcibly arrested without a warrant, but they were released later.

In Makassar, the number of arrests increased from 9 to 21, they are all facing charges related to destruction of property. Makassar was totally paralyzed by police sweeps looking for anarchists.

A statement from Indonesian Anarchists:

So now many comrades are on the run because as we have counter-intelligence informants within the police apparatus who have told us that ‘mapping’ of Indonesian anarchist networks is being carried out.

Right now we would appreciate international solidarity in the form of actions and also financial support. If people are able to provide financial assistance please send it to the paypal below. We will use it for legal fees and to help support our friends who are in hiding because they are being targeted by police.

Anarchists and syndicalist labour once existed as a movement long before Indonesia is independent. Anarchists, together with their socialist and Marxist friends in the PKI, have a role to be reckoned with. They had moved before the PKI was formed, agitated the 1926 rebellion, and as an underground movement responsible for a series of sabotages and bombings against the occupation of Japanese fascism.