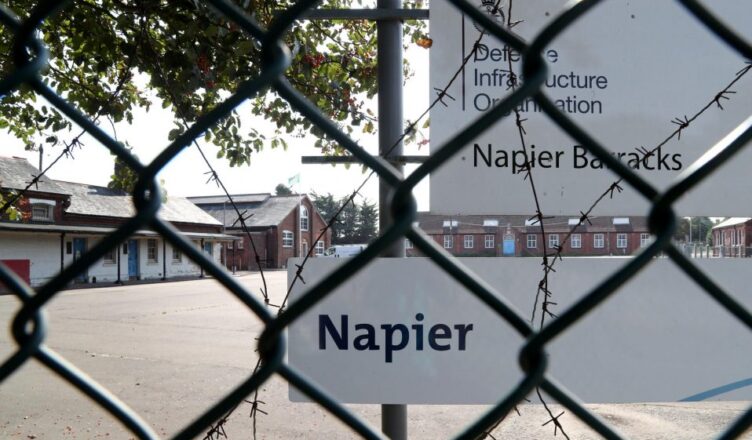 The situation at the Napier Barracks site in Folkestone, Kent, is critical, with people’s lives at risk. The Napier Barracks is a site that the government uses to house new arrival asylum seekers whose applications for asylum have not yet been processed. The site houses 400 asylum seekers, at least 120 of whom now have Covid 19. People being housed on this site protested recently about the unbearable conditions there. They protested at being kept in cold, cramped conditions and about vulnerable people being denied urgent medical care. The situation has become worse since residents at the site became seriously ill with Covid 19. The site has been put on lockdown, with residents not permitted to leave. This situation at the Napier Barracks has become so bad that up to 40 of the people who are living on the site are now on hunger strike and there have also been suicide attempts by some of the people there.

So far, the Immigration Minister, Chris Philps, and the Home Secretary, Priti Patel, have responded by blaming the asylum seekers themselves for their own situation, claiming that they were not social-distancing (blaming others for what they themselves are responsible for is something this government does regularly). However it is not actually possible to properly social distance at the site due to the cramped conditions that the people there have been protesting about. In most of the blocks on the site, there are 28 people sharing the same space and very limited facilities, such as toilets and showers. It should also be pointed out that the people being housed at the Napier Barracks site are not even being provided by the government with basics such as food and soap (which have had to be donated and provided by charities).

Asylum seekers have been through hell (experiencing the horrors of war, famine and persecution that are symptoms of capitalism) now to be treated like criminals – locked up, in dire, cruel conditions and being blamed for their own predicament and now living in fear of dying of Covid 19. The government is happy to lay the blame squarely on asylum seekers because it feeds into racist narratives and attitudes which benefit the government and the ruling class and divides us – the working class.

People who complain about asylum seekers should be aware that the government uses the issue of asylum seekers as a distraction from those that really are to blame for our problems – the ruling class. This ruling class, through their media and government, promise to ‘look after their own’ if they could just control the influx of people from abroad. The idea that the ruling class are the same as us and are on our side and would therefore ‘look after us’ is demonstrably false, shown by the stark reality of hungry people born in this country, including children. Many, if not all, in the government voted against feeding vulnerable and hungry school children, and continue to inflict harsh austerity on the working class whilst the rich live in luxury and nefariously amass disgusting amounts of profit, resources and power while the majority of the world’s population struggles to get by. Here in Britain, bosses of the largest companies will be paid more in the first three days of the week than the average worker’s annual wage.

Some right-wingers have also tried to claim that new strains of Covid 19 have been brought here by asylum seekers. This, however, is a racist lie. The new strain of Covid 19 was in fact first discovered in a sample from the Canterbury area. Scientists confirmed that sample location data was based on residency by public health. What this means is that the first person the new strain was found in was from this country. It is also a fact that all new arrivals are put into quarantine for 14 days, making it extremely unlikely that they would be transmitting the virus.

The ruling class and their government don’t care about asylum seekers, or working class people born here. Don’t be conned by racist, divide and rule propaganda.