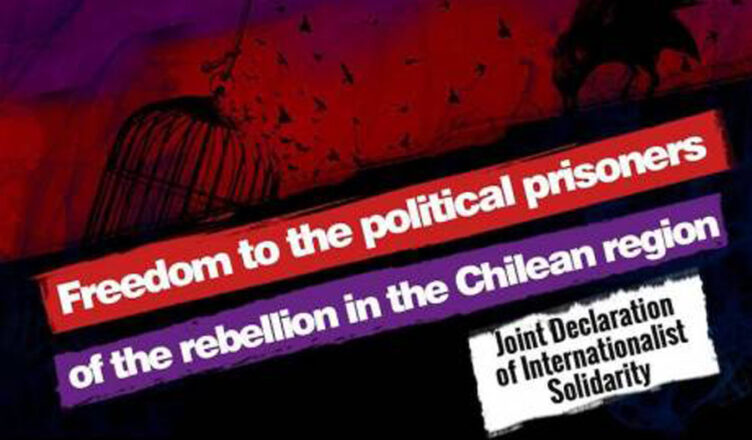 International Statement for the liberation of the political prisoners, arrested during the 2019 social revolt in Chile

“The prison does not prevent anti-social acts from taking place. It increases their numbers. It does not improve those who enter its walls. However it is reformed it will always remain a place of restraint, an artificial environment, like a monastery, which will make the prisoner less and less fit for life in the community. It does not achieve its end. It degrades society. It must disappear” (Prisons and Their Moral Influence on Prisoners, Peter Kropotkin, Kropotkin’s Revolutionary Pamphlets. Roger N. Baldwin, editor. Vanguard Press, Inc. 1927)

“Our companions shall not feel alone. The people with whom they shared joys and sorrows, failures and victories, remain with them more than ever, resisting with a strong passion. Feeling more love and hate each day. The love and hate through which, together, we will change the world from its roots”. (Juan C. Mechoso, Acción Directa Anarquista: Una Historia de FAU, 2002)

1. It has been over a year since protests overflowed the streets of numerous cities in the territory dominated by the State of Chile. Since October last year, people have fought without rest. Despite state repression, the COVID-19 pandemic, and starvation, the will of the people of Chile to organize and fight has continuously flourished. We are now in times of struggle and resistance in several territories around the world, from Ecuador witnessing the struggle and resistance of indigenous people, to France, observing that of the deprived proletariat. People have revolted against the global system of domination.

That is why internationalism, that old traditional practice of the oppressed classes, becomes imperative. The word solidarity and its real-life praxis has always been a constitutive principle of these struggles. Thus, leading us to project it onto the horizon of emancipation.

Bullets and tear gas have not been the only weapon used against our class, but also severe repressive laws. With the support of social democracy, these laws were passed, and are epitomized in the “Anti-Barricades Law”, in the “modernization” of repressive State apparatuses such as the National Agency for Intelligence (ANI), and in giving the Special Forces new infrastructure to improve their state terrorism.

As it is known, the Chilean State’s repression is exercised exclusively on our class, for when war weapons and combat equipment for the State are found to be used by armed groups of the ruling class, they are considered only gear. However, breaking the showcase of a bank is considered terrorism for the State and could keep you captured for years for such action. Nowadays, for our class, to walk the streets with a spoon and a pan, or with a cardboard sign while shouting for social rights is extremely risky. We could go to jail just for that. Ultimately, prison is a class issue.

3. Currently, there are almost 2,500 comrades subjected to brutal judicial processes that have dragged on for more than a year, keeping thousands behind bars. Without sentencing our comrades but using “pretrial detention”, the state ridicules those who have fought alongside their class during this year of the social outbreak, even if they are underage. On the other hand, the few convicted face unfair jail sentences, some between 11 and 20 years, due to speculations of the prosecution. The prosecution’s revengeful sentencing has punished those who have challenged the system of domination, and those who have dared to question the increasing commodification and precariousness of our lives.

As if the above were not enough, the political prisoners of last year’s social outbreak have been kept in isolation, have been tortured daily, and have been restricted from receiving visits, or any other jail benefit.

4. We make a call for active solidarity, a call to put our minds and bodies in the struggle for the release of all political prisoners and to coordinate demonstrations in all the territories of the so-called Chilean State demanding a GENERAL, UNCONDITIONED AMNESTY. Whoever forgets the prisoners forgets the struggle. Therefore, achieving their freedom is imperative for struggling communities. We make a call to strengthen people’s organizations, to champion the struggle for the freedom of our comrades, and to fully take part in the various activities and rallies that are being convoked.

5. Lastly, we clarify that the reality of the political prisoners was not born on October 18, 2019, but it is a problem that has existed for decades. Historically, the State has sought to punish those who have fought for the breakdown of the class society. Thus, we solidarize with the Mapuche political prisoners and revolutionaries as well, as they resist every day in the prisons-companies of the State of Chile.

FREEDOM TO THE POLITICAL PRISONERS OF THE 2019 SOCIAL OUTBREAK!
NO MORE IMPRISONMENT FOR STRUGGLE!
GENERAL, UNCONDITIONED AMNESTY!
END THE ANTI-TERRORISM LAW!
REPEAL OF ALL REPRESSIVE LAWS!