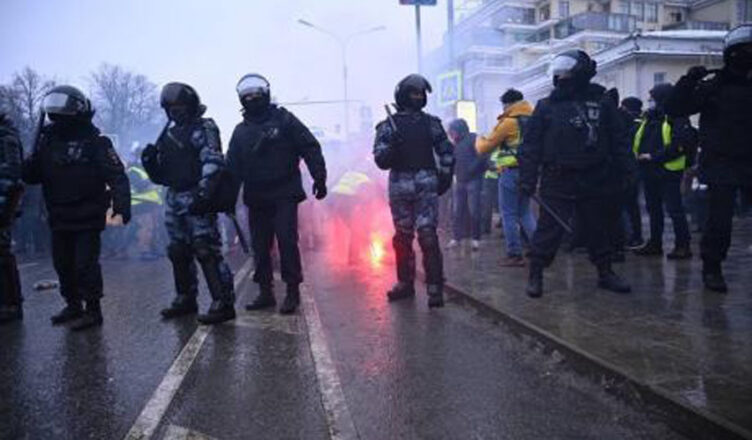 From the Libcom website. A report from anarchists in Russia, describing the situation there during the protests of January 23, in which tens of thousands across the country rallied in response to the arrest of opposition leader Aleksei Navalny—expressing anger that runs much deeper. This article was first published by Crimethinc.

We have received the following report secondhand from anarchists in Russia, describing the situation there during the protests of January 23, in which tens of thousands across the country rallied in response to the arrest of opposition leader Aleksei Navalny—expressing anger that runs much deeper. It had been our hope that sooner or later, the unrest from Belarus might spill over into Russia—this is certainly the best hope for rebels in Belarus and elsewhere around the sphere of Russian influence, as well as all who suffer under Putin. We publish this here in the interests of fostering international perspectives among all who endure the consequences of capitalism and state power. May even revolt deepen and spread.

Today, January 23, a spark has been lit in the Russian Federation. From Moscow to Ulan-Ude, tens of thousands have poured into the streets for protests against Putin, corruption, and repression. At first glance, these demonstrations may seem like the same opposition protests that kick off every time a prominent opposition candidate is acutely repressed. But to us on the ground, we feel that something has shifted.

The usual passive attitude that is typical for these kinds of protests has been abandoned. People are fighting back against the police. Likewise, these rallies aren’t just in the typical places, nor are they comprised of just the same politically active upper-class people. From the city of Chita, we hear stories that the cops have been routed. In Perm, a crowd applauds after anarchists speak about rebellion, self-organized activity, and solidarity against repression. In Irkutsk, people are receiving anarchists and their words warmly as well. In one place, people block police cars, while in another, they de-arrest a protester. On one street, a man knocks out a cop, while on another, people chant “Freedom! Freedom!” as a woman wrestles a baton from a cop’s hand. Beyond the growing interest in anarchist ideas, which is certainly exciting, there is an even more exciting anarchic potential in the revolt that broke out today, however humble.

One exciting emergent tactic that has been snowball attacks on the police that have fostered confidence and maintained tension while also being an escalation people are comfortable with. If the point of an insurgency is to humiliate the authorities and motivate other partisans to take action, this is certainly a way to do so. In one video circulating on Telegram, you can even see a snowball attack escalating to an attack on an a vehicle with a state license plate [reportedly, a vehicle potentially associated with the FSB, the hated Russian Federal Security Service]. We have seen revolt begin to bloom in these tactics, but, on the other hand, repression has come too.

The state has admitted to over 3000 arrests. Videos depicting brutal police beatings have emerged. Para-state vigilantes were out in droves. Metro stations were shut down. No doubt more repression will follow; the Russian state has great repressive resources. However, like all states, they require a certain level of compliance from the people if they are to succeed in repressing crowds in the street and movements more generally. Cops were able to do their usual routine of muscling in and snatching people numerous times, but people also fought back, rescuing their comrades from the police or even driving police from some areas entirely.

Roughly translated, “The people are not sheep.”

Many people here seem to have seen Belarus as an example where repression and police violence didn’t force the rebels to back down. Chants and messages of solidarity with the struggle there can be found in many of the gatherings today. This fills us with hope—not in the sense that two nationalisms are greeting each other, but because these struggles are breaching their national borders. Every beach that the wave of insurrection makes is different, we all have different contexts, but we can also find common cause, resonance, and inspiration. We can find resonance with those in Belarus who rally against an oligarch whose grip may be slipping, with those who defend themselves from the police, and most importantly, with those who, at times, managed to out-pace the politicians whose experience of repression was among the original catalysts of the unrest.

We should perhaps mention that we have no praise to give Navalny, the politician whose arrest seemingly triggered this wave of protests. Navalny is an opportunistic ultra-nationalist bigot of a politician who paints himself as a populist using a narrative of anti-corruption politics that would only prop up a different batch of oligarchs and perpetuate oppressive attitudes in more pernicious ways. He isn’t even the most popular opposition politician, nor is his party the most popular. Funnily enough, the most popular opposition party is the Communist Party of Russia whose rank and file were also in the streets today. But we digress.

Today, we saw tactics and resolve to fight spread almost instantly across terrain and communal differences. Around 100,000 people got a taste of collective action. We hope that the topics of the protest generalize as well as the protests themselves, but this is as good of a stepping stone as any to take the next leap from. These next moments are crucial. How do we act cohesively, effectively, and decisively without military-like command structures, and without relying on the FBK (Anti-Corruption Foundation) for leadership? How can we operate without drawing too much repression down on our own distinct organizations or groups of friends? We still have many questions, but we also see that so much of what we need is already here.

We have sent this missive in hopes it reaches some American friends whose summer of fighting the police has been an inspiration to us, at least. In Russia, we have a saying, “the goats are eating the wolves,” where Americans might say “the pigs are flying.” In Russia, crooked cops are called werewolves and in the US, we understand cops, are pigs. So in the spirit of international solidarity, we say may the goats eat the wolves and let’s put wings on pigs.

Where there is misery, there is resistance.
Courage and cunning!
Not for Navalny, but for the people!

PS—Rebel greetings to those fighting in the streets of Tunisia! Down with the police-state!