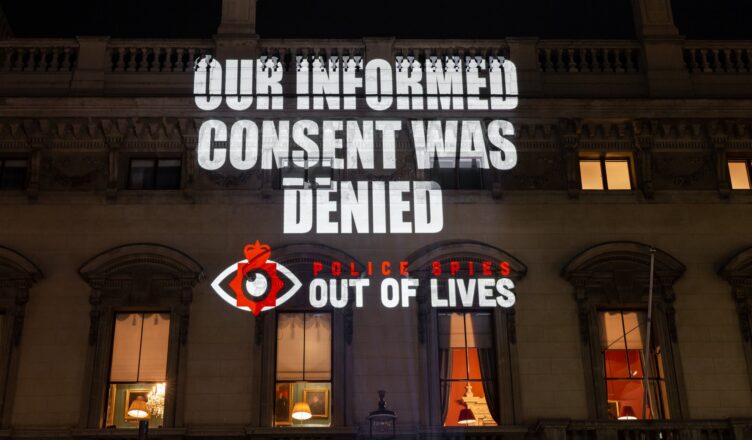 The ongoing Spycops hearing in the Royal Courts of Justice in London reveals the vile immensity of the crimes committed by the State and the Metropolitan Police, not least the mass deception of women involved in various radical movements. In the course of forty years, the shady police unit, the Special Demonstration Squad (SDS) has sent at least 139 undercover cops into a thousand (1,000) political parties, organisations, campaigns, defence committees and justice groups. Thirty plus women were deceived by male police officers into intimate sexual relationships, having children with some of them, whilst three female undercover cops also deceived male members of various groups into intimate sexual relations. To further their undercover identities, the SDS stole the names and identities of at least 80 deceased children, to provide aliases. They spied on 26 justice campaigns, including the one organised around the murder of Stephen Lawrence. In addition to this, they organised various provocative actions and activities.

The SDS was set up in 1968, by the Met’s Special Branch in the context of the two huge demonstrations against the Vietnam War that happened that year. They did this with the approval, and we should say, probably at the instigation, of the Labour government led by Harold Wilson. It was at first known as the Special Operations Squad, changing its name in 1972. It functioned in liaison with one of the British secret State bodies, MI5 (Military Intelligence, Section 5).

The first operation of this spy cop group was the surveillance and infiltration of the Vietnam Solidarity Campaign (VSC), the organiser of the demonstrations mentioned above. One of these cops infiltrated both the VSC and the Revolutionary Socialist Students Federation, and helped organise the demonstrations! When questioned at the hearing he said that he had voted against the motion put forward by a Maoist group within the VSC to have a march to Downing Street, as his false persona was “a bit anti-Maoist”.

The Metropolitan Police also used other undercover police officers to carry out sting operations. In 2007 four undercover police posed as criminals – drug dealers and money launderers – in order to request the lawyer Azhar Khan as their brief. They did this with the connivance of six other cops. Azhar Khan was one of the first BAME lawyers. He encouraged other BAME men and particularly women to enter the profession, and he worked in a working class area, doing a lot of legal aid defence work. The police had a grudge against him for this, and there was a large dose of racism in this equation. They set up an operation known variously as Operation Castration, Castrum and Castro, which lasted for 18 months.

Khan was offered an opportunity of laundering £50,000. They also offered him big bags of drugs. Khan turned down all of these offers. They then lied to their officer in charge saying that Khan had agreed to committing a crime at a meeting they had had with him. Despite no evidence of any crime being committed, his home and office were raided in December 2009, and he was charged with conspiracy to pervert the course of justice. The police later had to admit that the fake arrests of undercover cops were designed to try and find evidence of criminal conduct by Khan. These attempts at luring him into committing crimes were repeated over and over again, despite his spurning of offers to commit crimes on every single occasion. The judge threw the proceedings out of court.

Khan was singled out precisely because he was an Asian lawyer.

In the case of the Stephen Lawrence defence campaign, instead of looking for the racist murderers of this black teenager, the SDS sent four undercover cops into the campaign set up by his family, in order to find dirt on them. When they could find nothing against the family, they started focussing on other members of the campaign. The Stephen Lawrence campaign was just one of many such family justice campaigns infiltrated by the SDS, including that of Jean Charles de Menezes. Not one of the officers involved in these campaigns has been disciplined.

One of the worst features of the activities of the SDS was the infiltration of personal lives. It is highly likely that undercover cops were actively encouraged to enter into sexual relationships with members of the groups infiltrated. They became fake friends and fake lovers. They deceived women, and a few men, into sexual relations. They were introduced to the parents of these women, they attended funerals of their relatives, they continually deceived. They fathered children with them, and then abandoned them. They actively influenced the policies and actions of the different groups infiltrated. They stole the identities of dead children. They conspired to bring about arrests that resulted in miscarriages of justice.

The Metropolitan Police agreed, on 23rd October 2014, to pay £425,000 to a woman whose child was fathered by undercover cop Bob Lambert. She was a 22 year old activist at the time of the relationship. This payout was part of an agreement to drop legal action alleging assault, negligence, deceit and misconduct by senior police officers. Lambert disappeared two years after the child was born. This case is just one of many. The Met has insisted that that “the Metropolitan Police Service has never had a policy that officers can use sexual relations for the purposes of policing.” This is patently not the case, with the encouragement of such behaviour at high levels of the Met, and above by its masters in government. These sexist and misogynist policies, combined with the racism displayed in the cases cited above, and the undermining of many groups engaged in perfectly lawful and peaceful activities, point to a poisonous culture reigning in the forces of the State. These undercover cops weren’t rogue cops, naughty boys who got carried away, they weren’t aberrations. Their conduct was rubber stamped by the State.

One undercover cop, “Peter Fredericks” stated during the inquiry that the deceitful relationships established by spycops were similar to them “sampling the product” of drug dealers whose operations the police would infiltrate!

The current inquiry into these nefarious activities, presided over by retired judge John Mitting  is a complete whitewash. Mitting has granted anonymity to many of these spycops, and he has refused to allow livestreaming. As Kate Wilson, one of the women deceived into a relationship with undercover cop Mark Kennedy wrote: “In allowing officers to maintain their anonymity, Mitting appears to believe that police evidence is more valuable than victims’, and his bias when it comes to deciding what the public needs to know puts control of the narrative in the hands of a sexist, racist, politically prejudiced institution that carried out anti-democratic operations without public oversight for decades.”

Police Spies Out of Lives: policespiesoutoflives.org.uk