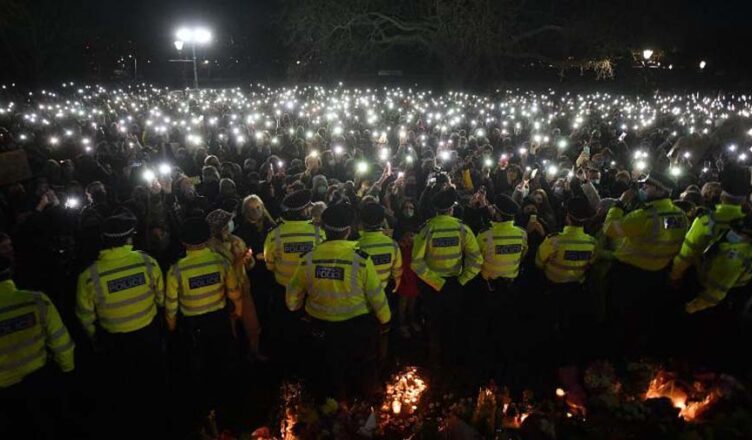 “To the police who have been subject to the most dreadful abuse, you have my full backing as you act proportionately, fairly and courageously to maintain law and order.” Priti Patel, backing the police against the Black Lives Matter demonstrations

Our recent article on Police and Violence against Women was overtaken by the events of March 13th at Clapham. We wrote: “Here it is to be hoped that women will not be deterred by the actions of the police and the courts and turn out in large numbers in the streets to express their anger.” And indeed they did, as thousands turned out for the vigil at 6pm on March 13th at Clapham. In response the Metropolitan Police behaved in its usual thuggish manner, attacking the vigil, handcuffing women and placing knees in their backs. Already damaged by the revelation that the murderer of Sarah Everard was a Met cop, the Met dug an even bigger hole by enabling images of themselves brutalising women at a peaceful vigil against gender-based violence be beamed out all over the world.

The Home Secretary Priti Patel demanded a “full report” from Cressida Dick, the head of the Metropolitan Police, describing the footage of the police actions as upsetting. Yet it is Priti Patel who has enabled what happened at Clapham through her tough attitude to protests and demonstrations, and who has encouraged the police to come down heavy on any signs of dissent. Yes, Cressida Dick should resign, but so should Patel, who is her boss and ultimately responsible and culpable for what happened at Clapham.

Today, as we are still digesting the Clapham events, some of the most authoritarian measures against protest and dissent will be introduced via a new policing bill pioneered by Patel. The Police, Crime Sentencing and Courts Bill has a wide reach, covering sentencing and digital information. But what is most alarming is the section on the policing of protests. If this bill gets through, Patel will have the power to define what she deems as “serious disruption” to organisations and communities, and the police will be able to impose conditions on protests. This is partly in response to the Black Lives Matter and Extinction Rebellion protests of the last couple of years, but also to prepare for any serious disturbances caused by the austerity measures that this government will impose, in fact is already imposing, after the pandemic.

Despite the ongoing revelations over the spy cops which infiltrated into many groups, organisations and campaigns over the last half century, Patel wants to develop covert intelligence gathering and an increased use of facial recognition technology. This is in spite of a Court of Appeal ruling last year that its use in South Wales broke privacy rights and equalities.

The bill also calls for the introduction of wider stop and search powers “to prevent serious disruption caused by protests”. This will mean an increasing harassment of protestors as they join or leave demonstrations.

The bill will also be able to say when demonstrations should start and finish; they will be able to determine maximum noise levels at static protests, thus, for example, affecting the noise pickets mounted by grassroots unions like CAIWU, UVW and the IWW. Even “one-person protests” will be subject to these new police powers. Already the police and the State have huge powers to restrict protest, increased with the pandemic, and now the Johnson regime wants to up the ante by increasing these powers even more. This bill is a massive attack on our freedoms and civil rights.

As we said in an earlier article: Patel has kept her pledge to defend the police as Home Secretary when she was elected. She continues to do so, whilst a movement has emerged in Britain that questions the nature of the police and its long record of deaths in police custody and its everyday treatment of black and Asian people. But then again, that’s hardly surprising. Patel has spoken twice at meetings of the Bruges Group, a right wing think-tank that includes many members of the far-right among its members. These include Martin Webster, the leader of the National Front in the 1970s, and the Holocaust denier Lady Michele Renouf, as well as many former members of UKIP. The Bruges Group is financed by a number of right-wing billionaires like Lord Malcolm Pearson, Michael Freeman, Sir Rocco Forte, and Lord Stanley Kalms.

At the Bruges Group conference in London on March 7th, the chair of the Group said, “I would like to congratulate Boris Johnson on appointing two spartans and Bruges Group speakers to high office. First, Priti Patel to be home secretary. I have a letter here from Priti thanking us at these difficult times for our support”. The Bruges Group is an enthusiastic supporter of the Putin regime and its members have appeared on the Putin-controlled TV channel Russia Today. The leader of the far-right Alternative for Germany (AfD) has spoken at Bruges Group meetings in 2013 and 2015. Both Tebbit and Thatcher have been its honorary presidents.

Patel was forced to resign from the May government three years ago because of her meetings with Israeli ministers, business people and a senior lobbyist. It was she who voted for a stricter asylum system, she who backed May on the “hostile environment” policy which led to the persecution of members of the Windrush generation. She has consistently voted against the protection of human rights. She voted against same sex marriages, she argued that it was wrong to bring the police to account through the courts”. In November 2020, she faced calls for her resignation over allegations of bullying against her staff which emerged in March of the same year. A Cabinet Office inquiry apparently discovered evidence of this, but Johnson intervened to defend her, as he needs her as an ally.

Patel is now trying to look for a scapegoat in Dick. Of course Dick, who was actually promoted after her involvement in the police murder of Jean-Charles de Menezes, should resign, but so should Patel.

The stinking cadaver that is the Labour Party, under its police-friendly tailor’s dummy of a leader, originally planned to abstain on the policing bill. In other words it planned not to oppose the bill. Now, through the force of circumstances, it has been pushed into opportunistically voting against the bill.

It was the thousands who turned up at Clapham who brought this about. Any erosion of the few liberties we have has to be met with the power of mass action on the streets. We cannot allow the corrupt and cronyist Johnson regime to silence us.