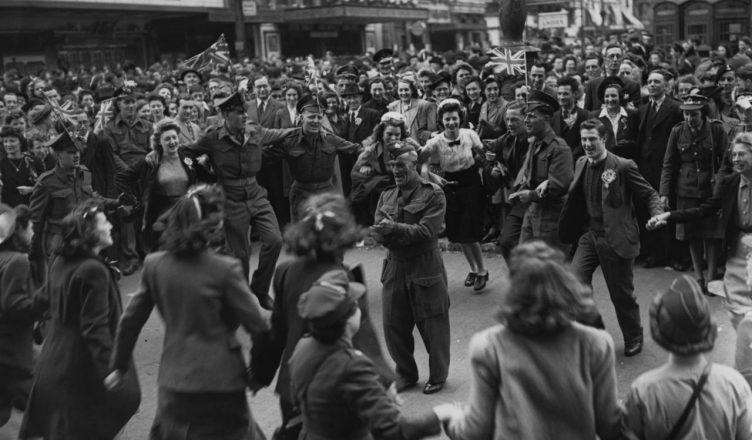 With some people in front of their homes celebrating the 75th anniversary of the ending of World War Two in Europe, while still social distancing, it’s difficult not to have mixed feelings. Marking the defeat of the Hitler regime by allied forces in May 1945 and the ending of Nazi occupation in Europe with the horrors of the concentration camps cannot be underestimated, given that it was a capitalist war that was responsible for countless millions of deaths, military and (mostly) civilian.

While on one level, it was a victory over Nazism and fascism, in reality, World War Two was no war against fascism. Indeed, for the imperialist powers such as Britain, the USA and an expansionist Soviet Union, liberating the Jews from the likes of Bergen-Belsen was purely incidental in their opposition to Nazi Germany’s threat towards their own national and economic interests.

So said Winston Churchill to Mussolini before the war. For the ruling class and their political representatives in various “democratic” countries, fascism or liberating the Jews was never an issue. Jews had been persecuted in Germany and elsewhere for years before the war started, and as fascist armies were invading Abyssinia and Libya or murdering the organised working class in Spain, Italy, Germany and elsewhere (while the “democratic” powers looked on), the horrors of fascism was of little concern… not until it threatened “British economic interests” or the economic interests of other countries.

And the sad fact remains, that now in 2020, modern far right variants of fascism are still around, still tolerated and on the increase. In many countries, right wing populist governments (Orban in Hungary, Bolsonaro in Brazil, Duterte in the Philippines, Trump, Johnson), while not fascist or Nazi, are nevertheless apt to follow a political trajectory which has echoes of fascism.

It’s also worth remembering that, since the end of World War Two, constant wars have been pretty much the dominant characteristic of “democratic” capitalism, as various powers and their proxies have fought across the globe over wealth, resources and strategic interests. These numerous wars fought in the name of freedom or democracy since 1945 have resulted in untold horror for countless millions. They continue to this day.

Today, here in Britain, Boris Johnson is keen to portray the Coronavirus pandemic as his very own Churchill moment, with him as the great patriotic national unity leader (with a compliant Labour opposition) in a “war” against this wicked virus. Never mind the fact that his government is actually responsible for the unnecessary deaths of thousands, thanks to their botched handling of the current pandemic.

National unity is the bullshit way of saying unity with your bosses, your exploiters and oppressors. In 1939-45, many working class people found themselves at odds with this national unity (see Pete Grafton’s excellent book, You, You and You! ) as we really are not all in the same boat. Back then, the State was finally forced to make concessions such as establishing the NHS. In some ways, the same applies today, and we will have to fight against any attempts to force us back to work when the virus is still rampant, and say no to any new austerity programmes the Johnson regime will try and foist on us, once the crisis is over.

What anarchist communists said on the 50th anniversary

THIS YEAR MARKS the 50th celebration of both VE-Day and VJ-Day, the Allied Powers’ celebration of victory over Nazi Germany and then Japan. As usual speeches will be given by European and American statesmen in which phrases like “the struggle against Nazism”, “the struggle against fascism”, “the liberation of peoples” etc will be liberally peppered. But is this really the truth? Mussolini’s rise to power in 1922 made Italy the first fascist country. In 1928 Salazar set up his dictatorship in Portugal. Hitler came to power in Germany in 1933 and Nazism opened its first concentration camps. In 1939, after the defeat of the Spanish Revolution, Franco established his murderous regime. During more than 10 years the Great Powers — France, Britain, USA and the supposedly communist USSR maintained political and commercial relations with these states. All of these powers accommodated themselves, and none of them sanctioned, these regimes. At Munich in September 1938 Chamberlain for Britain and Daladier for France signed an agreement with the Nazi regime, allowing it to occupy the Sudetenland, a part of Czechoslovakia with a German-speaking population — a rich prize for Germany because of its economic and industrial riches. Even when the German Army invaded Poland in September 1939 the Allied bourgeoisie did not flinch. The European Allies declared war on Germany, certainly, but this consisted of a few French units invading Germany to reinforce its first line of defence, the Maginot line (November 1939). The Western European ruling classes couldn’t care less about the rise of Nazism, just as much as they were not bothered by the rise of Francoism or Salazarism. Order reigned and that was all that concerned them. What they had been worried about was the social unrest and the popular revolts which had deeply disturbed them since 1917. They were pleased that strong and stable regimes had been installed that would break working class revolt and resistance.

The Russian Revolution of 1917 had set off a chain reaction throughout the world — the workers’ councils in Germany, followed by those in Italy and Hungary, and then the revolutionary collectivisations in Spain. These movements were bloodily destroyed and fascist regimes were installed during or after these defeats. These fascist regimes were to be preferred by the Western allies to the spectre of working class revolt. Churchill — the great ‘democrat’ — who was deeply racist and considered blacks as sub-human — never concealed his admiration for Mussolini. What was important for Britain was that its trade routes through the Mediterranean to its colonies in the Middle East stayed open. The fascist regimes installed throughout the Mediterranean area went along with this and the fate of the populations under their boot-heels were of no concern. The British ruling class refused to welcome refugees from the Spanish ‘civil war’.

France set up concentration camps in the Pyrenees to imprison the Spanish refugees, and these were joined by other refugees from fascism in Germany, Central and Eastern Europe. The Western allies knew the fate of the populations under Nazi and Fascist domination, whether in Ethiopia or Poland, and they knew from 1933 that the Nazi regime was oppressing Jews, Communists, homosexuals and gypsies. For its part the United States continued economic and commercial relations with Germany. even during the blockade decreed by France and Britain. These continued after the alliance treaty between Germany and Japan. The US traded with everyone, no matter who they were. They entered the War after Pearl Harbour (December 1941) not to ‘liberate’ the populations of Europe but to safeguard their economic interests in both Asia and Europe.

The Stalinist bureaucrats were no more ‘anti-fascist’ than the Western leaders. The USSR had never stopped trading with Nazi Germany. The non-aggression pact signed between Hitler and Stalin was linked to an economic agreement: Poland would be carved up between them and Stalin would take over Lithuania and Estonia. The Jews of the Soviet part of Poland were as much delivered up to the Nazis as those of France. The Soviet leaders only became ‘antifascist’ when the German state broke the pact by invading the USSR in June 1941.

The ideology of antifascism was pushed among the working class in order to divert it from its autonomous class objectives and interests. This mystification allowed the ruling classes of each country to get the allegiance of their populations and to turn them into cannon fodder. Under the banners of anti-fascism and the defence of threatened democracy, the managers of capitalism stopped at nothing — 38 million dead to defend their interests! The Dresden bombing, the Atom bomb attacks on Hiroshima and Nagasaki! The entry of the Allies into the War was only motivated by the need to stop at all costs the new powers that were emerging in this period of world economic crisis (the Wall Street Crash in 1929). Germany, Italy, Japan menaced the vital interests of the Western ruling classes and their colonial empires, that is, the sources of raw materials necessary for their economies. The new powers needed these resources and natural wealth in order to develop their own economies. Out of this crisis sprang a new world order: the USA (the West) versus the USSR (the East). Once the war was over, the victors concentrated on oppressing and massacring the populations who refused their new order. For example, the French murdered up to 80,000 in 1947 during the insurrections in Madagascar, many through being gunned down, many more through hunger caused by French blockades of the insurgent areas. In May 1945, just after the Allies had won in Europe, repression began in Algeria which resulted in the deaths of up to 45,000 murdered by the French. In the repression unleashed by the British in Kenya in 1956, 10,000 were killed and 90,000 interned in prison camps. Each of these powers in its own colonial or neo-colonial sphere of influence, set up dictatorial regimes as bloody as each other, who defended the interests of their ‘antifascist and democratic’ masters to the detriment of the working class and peasantry world-wide.

From Organise! Magazine of the Anarchist Communist Federation, April-June 1995

What anarchists said in 1945

It is obvious that, after the neurotic outbursts of relief on VE-Day, the people of Britain are rapidly coming to realise just how phoney the peace is. Already, on the morrow of so-called victory, food rations have been cut once again, and we are informed that fewer clothes will be available, while cigarettes have gone into short supply. “Peace”, for the time being at any rate, seems to be a leaner condition than war, and, in the meantime, the process of release from military and industrial conscription appears to be scheduled to last for a good many years before it is finally ended. Meanwhile, the housing shortage becomes steadily more acute, and the tensions within industry, which were largely suppressed by such collaborationist institutions as the joint production committees, are steadily coming to a head.

After six years of war the workers expect something concrete. They are not likely to be put off for very long with such sops as the ending of the blackout, the abolition of the regulation against leaving oars in boats, or the granting of small quantities of petrol to middle-class car-owners. Already the incidence of strikes in industry has risen, and sympathy for the strikers seems much greater than it was during the war itself. A wide movement of direct action, which might well assume other forms than strikes, is what the leaders of all parties fear most of all, because it is the only kind of movement which can directly menace their own power and interests. Therefore they are prepared at all costs to divert the people from such actions, and an election, which gives the illusion of making a change in the existing set-up, and gives the ordinary man the feeling that he is actually doing something positive towards improving his conditions, is an obvious manoeuvre of this kind. It is a fair certainty that the pretence of party struggle which an election arouses will provide a compensation for direct action which will stave off trouble for at least some months after the election.

Vote, What For? From Freedom, anarchist weekly, June 2nd 1945