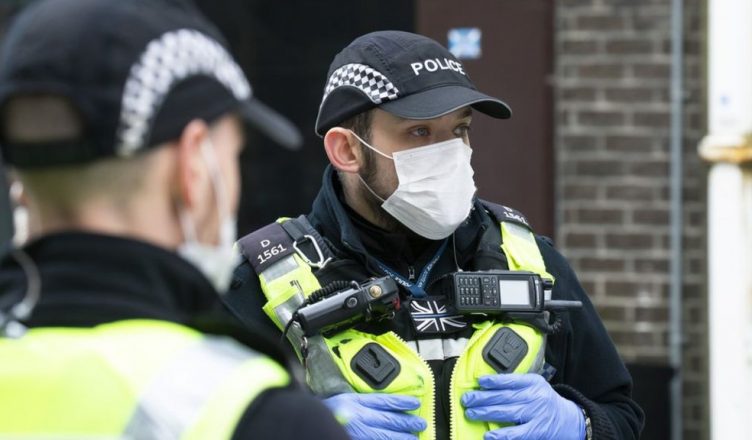 First of all, the facts:

The police have become increasingly alienated from the mass of the population under the Macron regime, with daily brutality, harassment and arrests. The police have been particularly brutal against the Gilets Jaunes and striking workers. The pandemic has not ended this situation. In fact, the police have used non-compliance with coronavirus regulations to insult, humiliate, fine and physically attack people. It is the working class neighbourhoods that bear the brunt of these acts.

The latest incident was on Saturday 18th April, at Villeneuve-la-Garenne, when police in a car without markings deliberately opened a car door as a motorcyclist was passing, causing him to fly through the air and sustain a serious open fracture to his leg. The police then drove off angry onlookers. This provoked a riot on the night of 20th April, with fireworks thrown at police who were using tear gas grenades and police charges. A journalist was violently arrested, before being released and fined for failure to comply with lockdown regulations. There were other riots in several working class neighbourhoods that night.

Anger is increasing against the police, especially after other incidents like the death in custody of a young homeless man of Arab origin at Beziers. Meanwhile an off-duty policeman at Noisy-le-Grand used his service pistol to fire on his neighbour, who was “making too much noise” but was released after his initial arrest. He was arrogant enough to boast about this on social media, pointing to the increasing impunity of the police. Every day new videos are appearing online witnessing the beatings, taserings and humiliations regularly being doled out by the cops. One video shows cops pushing a young woman to the ground in Aubervilliers, whilst another shows a man being punched to the ground by cops in Villeneuve-Saint-Georges. In fact, it is easier for the police to carry out these brutal attacks because bystanders cannot gather round to protest because of risks of fines equivalent to £128. It is above all immigrants and inhabitants of working class neighbourhoods who are bearing the brunt of these assaults.

On Wednesday March 18th, the first day of the lockdown in France, the police handed out 4,095 fines, equivalent to half a million pounds. On April 1st the number of fines had reached a total of 359,000 fines with 5.8 million checks! Cops are regularly abusing their powers under the regulations put into place by illegally searching bags and vehicles. They have dished out fines when they deem that goods bought by those they stop are non-essential, and these judgements are totally arbitrary. Everyone has to carry special documentation to go outside, and they too receive a summary fine if caught without it.

The police have themselves been breaking distancing rules by gathering around those they catch in the streets. Even worse, people are being put into police cells, where the chances of contracting the virus are higher.

Police used coronavirus regulations to break up a demo in a main square of the capital, Santiago, arresting 14 people, on April 21st. Protests against the government’s austerity measures, began last October over rises in transport fares and have been ongoing.

Cops attempted to break up a demonstration by health workers outside an Athens hospital protesting about lack of PPE equipment.

In one of the epicentres of the coronavirus in the USA, New York City, cops are carrying on like their French and Greek counterparts. A small boy of ten was surrounded at the 145th Street station in Harlem, a predominantly black neighbourhood, by 3 uniformed cops, who kicked away the food he was selling and then dragged him up the stairs as onlookers protested. His mother later tweeted that their family was homeless and that selling snacks was their only income.

The police are increasingly visible on the Metropolitan Transportation Authority (MTA) where they are throwing their weight around, ostensibly to catch fare dodgers. In actual fact, the NYPD is employing its usual brutality against the homeless, and against people of colour. At a time of raging pandemic, they are arresting people and sending them to prisons like Rikers, where many are contracting COVID-19. In fact, one in five cops in the NYPD are off sick with COVID-19 and any contact with the cops is a risk.

Whilst not up to the brutality standards of their French and American buddies (yet) British police are becoming increasingly intrusive using the pandemic as an excuse to bully. They ordered a family off their own lawn in South Yorkshire. Convenience stores were told not to sell “non-essential” items like Easter eggs whilst people have been fined for going out to buy “non-essential” items. Over 1,000 fines have been handed out, at £60 a throw. In a park in Bath, police harassed an 80 year old man with a walking stick for sitting on a bench. Walkers in the Peak District were filmed by police using drones. Police in South Yorkshire and Humberside encouraged people to rat on their neighbours if they saw them breaking lockdown rules. The Chief Constable of Northamptonshire instructed his boys and girls to check up on shopping trolleys containing non-essential items. In Warrington police issued court orders for the following: “Out for a drive due to boredom”. A woman at Newcastle Central station was fined £660, a conviction which was later quashed. More recently, a man fined £60 in London later had his fine cancelled. One man spent two nights in a police cell after being found eating biscuits on a bench. In Glasgow, a disabled woman sitting on a park bench with her autistic son was harassed by the police, who were later forced to apologise.

Kevin Blowe, of the police monitoring organisation Netpol, said that some people were being harassed by police for being out but not taking exercise, when they were actually returning from shopping, whilst others were reprimanded for sitting down for a minute to take a rest.

Some top cops are realising their forces are behaving like this on a daily basis and are concerned that they will lose public support. Met Assistant Commissioner Neil Basu was one of those who warned about this. He is obviously fearful that widespread anger about police behaviour will escalate to the level of France, where there is widespread hatred and contempt for the police. But the police are continuing to abuse the recent legislation.

Conclusion: Police Are Not Essential Workers!

Unlike health workers, transport workers, cleaners, food retail staff, street sweepers and bin collectors, the police are not essential workers. They are not there to help us, they are there to protect the wealthy and to harass us and increase their powers to fine and arrest, in particular if you are from a black or ethnic minority background. The coronavirus pandemic has shown the crying need to create communities based on mutual aid and solidarity. Such communities would tackle anti-social behaviour and there would be no need for outside bodies like the police.