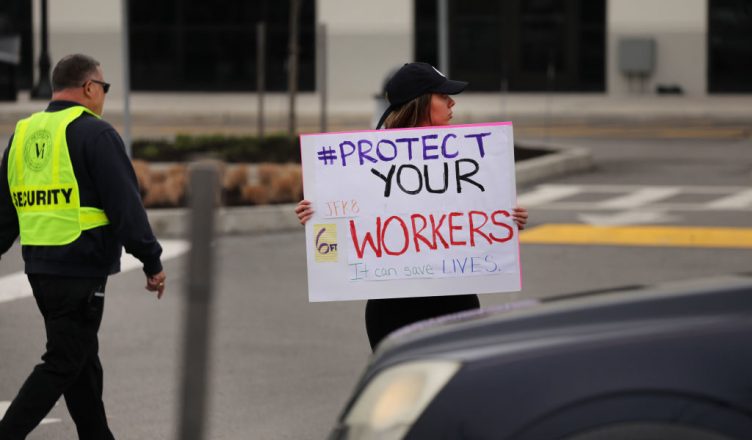 Eighty workers at the Marks and Spencer distribution depot run by the DHL company at Swindon walked out on March 24th and 26th over dangerous working conditions and lack of precautions over COVID-19. They demanded that M&S sort out the situation.

We reported earlier on postal workers coming out on wildcat strike at Alloa in Scotland over coronavirus concerns. We can now report that another fifteen workers did the same at Lochgelly, in Fife and there are reports of Edinburgh postal workers also walking out.

Earlier in March, postal workers went out on wildcat strikes in Southwark in London and Bridgwater in Somerset for similar reasons.

One hundred steel construction workers at the Tricoya site, where a wood chip acetylation plant is being built, voted unanimously on March 23rd to walk out on strike over coronavirus safety measures. Working conditions mean it is impossible to implement social distancing whilst working, and even on break times. They said they would not go back to work until tea breaks were split, as well as starting and working times. Management caved in on these demands, and workers returned to work.

Medway bin workers employed by Medway Norse walked out on March 30th over failure to supply PPE equipment and the closure of public toilets. Talks are ongoing.

On March 30th, 500 ASOS workers at the Barnsley warehouse in South Yorkskire went out on strike.

Workers at the Amazon distribution centre at Montelimar in southern France walked out on March 18th followed by a national calling in sick, with a half of the workforce taking part.

At the Carrefour supermarket in Vitrolles near Marseille, workers went out on strike on March 30th after two workmates were diagnosed with COVID-19. They demanded the ceasing of sales of non-essential items and a thorough disinfecting of the supermarket.

300 workers at the Amazon warehouse at Calenzaro, near Florence, walked out on March 30th after two suspected COVID-19 cases were reported. They demanded the end of distribution of non-essential items, a new face mask for each shift and regular disinfecting of the warehouse.