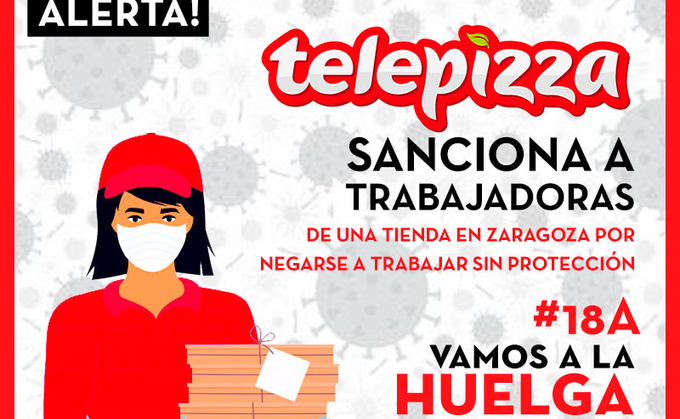 Postal workers at a Royal Mail delivery office in Skyliner Way, Bury St Edmunds, walked out on April 17th over safety concerns over coronavirus. They later returned after management was forced to impose the rule of only one person in a delivery vehicle at a time.

On Thursday, April 16th, up to a hundred delivery riders for the on-line food delivery outfits Deliveroo, Glovo, and Uber Eats, demonstrated in Madrid against cuts in pay, temporary contracts and lack of PPE equipment. There were similar protests in Cartagena, Malaga and Seville on the same day.

Workers at the Telepizza restaurant chain walked out on strike on Saturday 18th after 11 workers were disciplined for refusing to work in unsafe conditions. The disciplined workers faced suspension without pay for 20 days. Unrest has been bubbling under for weeks, and this was the final straw. Telepizza is classified by the Spanish government as an “essential service”. Many Telepizza workers dispute this, saying it is junk food.

In response to the disciplining, workers in Palencia organised a sickout, backed by thousands upon thousands of support messages on Twitter.

Bus workers in Toronto, including drivers and mechanics, working for Toronto Transit Commission (TTC) staged several wildcat strikes over lack of protection from coronavirus. So far 19 bus workers have tested positive for COVID-19.

On April 17th, 33 drivers and 5 bus depot workers refused to turn in for work and organised a rally. They demanded that they be supplied with PPE equipment, as well as deep cleaning of work areas. Thanks to previous actions, bus workers have gained plexiglass partitions for drivers, gloves, hand sanitiser, and limits to numbers of passengers.

The action was followed on Saturday April 18th by a wildcat strike of around 12 mechanics at the Queensway garage. Here, after 4 diagnosed cases of coronavirus among workers there, it was demanded that the garage be designated as a local outbreak centre and that it be shut down for 2 weeks to enable deep cleaning, after an earlier cleaning failed to counter the spread of the disease.

In Montreal, maintenance workers with the city’s transport system went out on wildcat on Thursday 16th after one worker was suspended for 25 days after speaking out about lack of PPE equipment and lack of social distancing.

In Detroit earlier in March, drivers went out on a 24 hour strike and management agreed to supply PPE equipment and not to charge fares so that passengers could enter by back doors and thus have less contact with drivers.