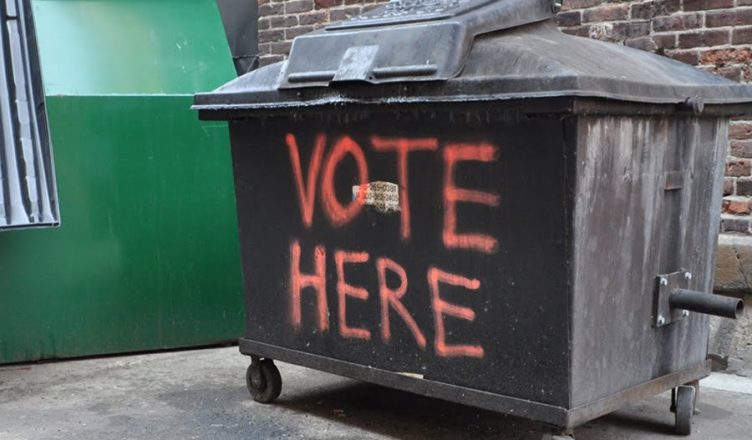 “Jeremy Corbyn and I are the stabilisers of capitalism,” John McDonnell in 2017.

Whoever wins the election, whether the Tories, Labour or a coalition government, we can expect one thing, that whichever faction of the ruling class controls government, we, the working class, will be under attack. In the context of the worsening economic crisis of capitalism, every party will be impelled to launch yet more attacks like austerity packages and legislation against strike action, the most recent example of the latter being the High Court decision to override the postal workers’ ballot which came out massively for a strike.

Whether we have the present electoral system or proportional representation, or however many people vote or don’t vote in an election or referendum, as we have seen in Scotland, capitalism is at the driving wheel globally. As working class people, we are exploited whether we can take part in ‘free’ elections or live under an authoritarian regime. Capitalists and property owners continue to control the wealth that we create, and they protect it through the police, legal system, and military.

All the political parties have made big promises, and we can expect that most, if not all of these promises will not be kept. The Tories, obviously, will carry on as before if re-elected, with further attacks on the NHS, pensions, workers’ rights, etc. The Liberal Democrats will seek to build a new centrist party with elements from both Labour and the Tories in the mix. Their politics will remain the same, that is, a party in favour of neo-liberalism, and the memories of their coalition with the Conservatives and the breaking of their pledge to reduce student tuition fees are still vivid. Their leader, Jo Swinson, an admirer of Thatcher and someone who is prepared to use the nuclear option, will most likely prefer to go into alliance with the Tories once again rather than one with Labour. The nationalists of Plaid Cymru and the Greens, have cobbled together an electoral pact, the Remain Alliance, with the Liberal Democrats. They will be damaged by this. The Liberal Democrats voted for fracking and received funds from a major fracking company. They voted for the bedroom tax, cuts in benefit and the introduction of Universal Credit, in favour of zero hours contracts, and have done little on climate change, with an advocacy of nuclear power. This is causing disgruntlement in the left of the Greens and Plaid Cymru. The Greens in particular may expect a haemorrhaging of members.

Labour has produced what is portrayed as their most radical manifesto in history. In actual fact what is being offered is a package of mild reforms, and Corbyn and McDonnell have both promised big business that they have nothing to fear. This document, It’s Time for Real Change, shows how far to the right the situation has swung in the UK, where such piddling reformist measures are regarded as dangerously radical. Socialism is only actually mentioned once in the manifesto, in relation to the NHS as being ‘socialism in action’. Labour affirms its role as a capitalist party by sending out the message to the ruling class that “Businesses are the heartbeat of our economy, creating jobs, wealth and innovations.” Other promises are the re-nationalisation of rail, energy, water, and postal services. But this is re-nationalisation, not socialisation of these services under the control of those who work them, but a state management of them, with all the problems that workers faced under previously nationalised industries.

Labour says it will reverse some of the cuts to corporation tax, but this would result in a corporation tax at 26%, still the lowest in Europe. It will do nothing against executives of corporations receiving huge salaries in the private sector, in fact they will be allowed to continue enriching themselves. In the public sector bosses will still be able to make as much as £350,000 a year whilst public sector workers remain on low wages.

Corbyn has a long record of supporting anti-militarist and nuclear disarmament initiatives. But since he has become Labour leader, he has capitulated to the Labour right, and the new manifesto confirms this, with a commitment to NATO. It states that a “Labour government will undertake a Strategic Defence and Security Review to assess the security challenges facing Britain, including new forms of hybrid, cyber and remote warfare.” It says that at least 2% of Gross Domestic Product will be spent on defence and that Labour will contribute £100 million to UN operations. In future, immigration will be based on work visa systems relating to the requirements of the economy, fudging the issue of open borders and giving sustenance to those in Labour like Len McCluskey who are developing anti-immigrant rhetoric.

In order to prove how much of a friend to the State Labour is, the Labour manifesto states that it will “rebuild the whole police workforce, recruiting more police officers, police community support officers and police staff. We will re-establish neighbourhood policing and recruit 2,000 more frontline officers than have been planned for by the Conservatives.”

These are the police that will be used against us if we rise up in civil unrest as seen recently in Chile, Czechoslovakia, Ecuador, Hong Kong and Hungary, Iraq, Lebanon and Somalia.

As for the Scottish National Party, it will push for independence and will make deals with Labour to help this come about. But the SNP is just another capitalist racket and it can promise the Scottish working class little, apart from the ending of Trident, which has been a source of discontent for many years.

Whoever gets in, we must be prepared to develop organisation in the neighbourhood and workplace to resist cuts, to carry out rent strikes, occupations and strikes, to requisition the many empty buildings that exist whilst thousands sleep on the streets. This will be a long hard struggle, but it is the only real alternative to the sham alternatives offered by the election.

We will be told, “If you don’t vote you can’t complain”, and if Labour gets in, that we shouldn’t rock the boat. As anarchist communists, we will not be deterred, and we will work towards the development of a revolutionary alternative, based around the struggles of everyday life, whether it be rents, housing, wages, poor working conditions, pollution and climate change.