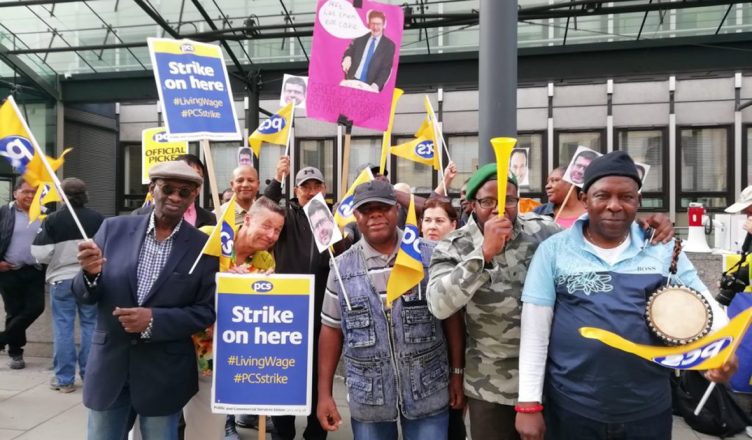 BEIS Workers Out On Indefinite Strike

Cleaners and catering workers are on indefinite strike at the Department For Business, Energy, and Industrial Strategy (BEIS). So far the workers have been on strike for 3 weeks. These workers work for outsourcing firms ISS and Aramark and are demanding that they pay the London Living Wage and improved sick pay and holiday pay and that be returned in house. The cleaners were joined on strike for five days by porters, security and post room workers which boosted the confidence of the strikers.

Drivers and passenger assistants employed by Hackney Council have recently taken strike action on a number of days to get proper pay for doing split shifts. On one occasion workers blockaded the entrance to a private car park where the employers had put the buses normally stationed in the council depot. They hoped in this way to foil pickets but this little ploy was spotted and cars driven across the exit.

Hackney is a majority Labour council. Labour councillors have shown a distinct hostility to the strike. One of them turned up to help with the strike-breaking and told strikers they should be happy with their wages -some earning less than £800 a month- and that there was no “magic money tree” (a direct quote from Theresa May!)

Workers at Sainbury’s Waltham Point distribution centre in Essex went on a 24 hour strike for the second time on 25th July against cuts to sick pay, reduced from 26 weeks to 2 weeks. A picket numbering several dozen strikers was put up outside the warehouse.

Hundreds of health workers at Bradford Royal Infirmary began a two week strike in the last week of July against privatisation. This entails outsourcing cleaners, porters and other support staff. Workers are strongly opposed to this which they see as a move to full privatisation of the Infirmary. There is widespread distrust of management, seen as liars ready to break promises on guarantees of NHS terms and conditions. 100 people were out on the picket on the first day.

Health visitors employed by Lincolnshire county council went on strike for 48 hours from July 15th. They again went out on 24 hour strikes on 19th July and 22nd July, and then another 48 hour strike on 25th July. They are striking over not getting paid the rate for the job and the erosion of their professional responsibilities. This is the first time that they have taken strike action.

The health visitors are on the NHS Agenda for Change pay scales, but have had no increases in pay since being transferred to the local authority which has different pay rates – even though both council and NHS employees have received wage awards, these health visitors have not.

NHS staff in England last year accepted a three year pay deal which, for the majority of staff, meant a 6.5 per cent hike in pay over the three years.