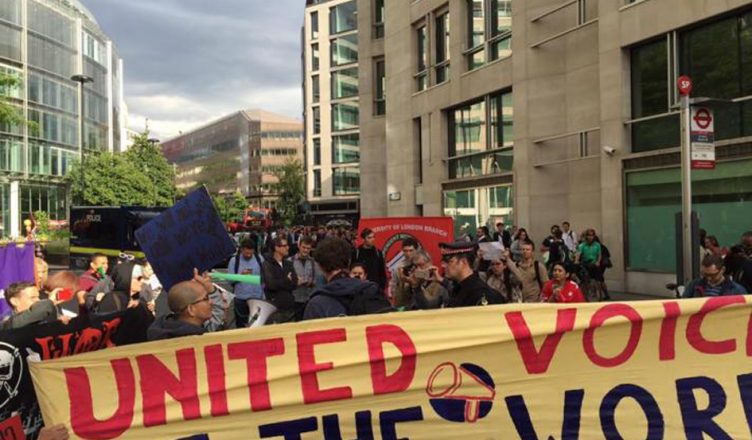 The grassroots, member-led union, United Voices of the World (UVW), has announced that workers in seven different workplaces are set to strike against low wages and poor conditions.

These workers include cleaners, baristas, security guards, chefs and till operators, and hail from dozens of different countries – ranging across the UK, Latin America, West Africa, Asia and Eastern Europe. Despite being employed by prestigious organisations in both the public and private sector, including the UK government’s Ministry of Justice and 200 Grays Inn Road – home to the production company behind ITV and Channel 4 News – many of the workers receive less than the London Living Wage and are denied basic forms of security like occupational sick pay.

Other workplaces affected include the White Chapel building, which houses the UK government’s digital services operation and the London Museum of Photography, plus two famous academic institutions: the University of Greenwich, on the banks of the River Thames, and St George’s, a medical school that forms part of the University of London. All UVW members at the relevant sites will be formally voting on strike action in the coming weeks.

In a major embarrassment for Buckingham Palace, among those walking out will be cleaners from London’s Royal Parks, responsible for some of Britain’s most famous green spaces including Hyde Park, St James’s Park, and Kensington Gardens. The parks are hereditary possessions of the Crown and managed by the UK government on behalf of the Queen, and yet workers who maintain the public facilities in them are paid only £8.21 per hour, substantially below the London Living Wage.

In common with most of the UVW members planning on strike action this summer, the Royal Parks cleaners are employed by an outsourcing company – in their case the French construction and facilities giant VINCI, which operates in more than a hundred countries and has been accused of a wide range of corruption scandals and labour abuses. Other outsourcing firms that will be targeted by the forthcoming actions include Sodexo (which made a net profit of nearly £600 million in 2018) OCS, and Baxterstorey.