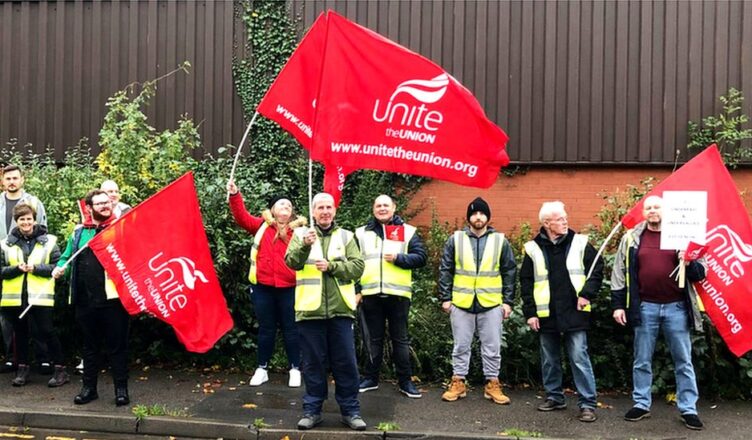 More than 200 bus drivers working for Stagecoach at Blackwood, Brynmawr and Cwmbran depots in Wales have been out on strike for six days. They are demanding a rise to £10.50 from £9.50 an hour. Stagecoach at first offered £10.10 an hour, then raising it to £10.30 an hour, but this is only slightly above the minimum wage. At the same time Stagecoach has cut paid breaks and sick pay, and is excluding new employees from the pay offer, creating a two tier system.

Meanwhile the managing director of the three depots has had a pay rise, going from £181,000 to £229,000 a year! Stagecoach has made a pre-tax profit of £2.1 million this year. This included £1 million government funding for COVID furloughs.

Whilst Stagecoach receives massive funding from the Welsh government, it charges steep fares for passengers.

Care workers working for SAGE Care home in North London came out on strike last week and demonstrated outside Freshwater House, which houses companies owned by Benzion Freshwater, who sits on SAGE’s board of trustees and is a billionaire property developer.

The workers, organised in the grassroots union United Voices of the World, are demanding wages parity with NHS workers and recognition for the UVW, as well as sick pay and holiday pay. They are also outraged that two workers have been dismissed by SAGE for their workplace organising.

Cleaners working for Facebook and on the railways, employed by the outsourcing agency Churchill, demonstrated outside Churchill’s main offices on October 25th. The workers who are members of the rail union RMT and the grassroots union CAIWU, are demanding a rise in pay, travel expenses and sick pay. Many workers are paying up to £200 a week in travel costs to get into work. The railway cleaners clean Thameslink, Southern, Great Northern and Southeastern stations.

Churchill pays its cleaners the minimum wage whilst trousering profits of £3.8 million in 2020.The joint action by workers in different sectors is commendable.