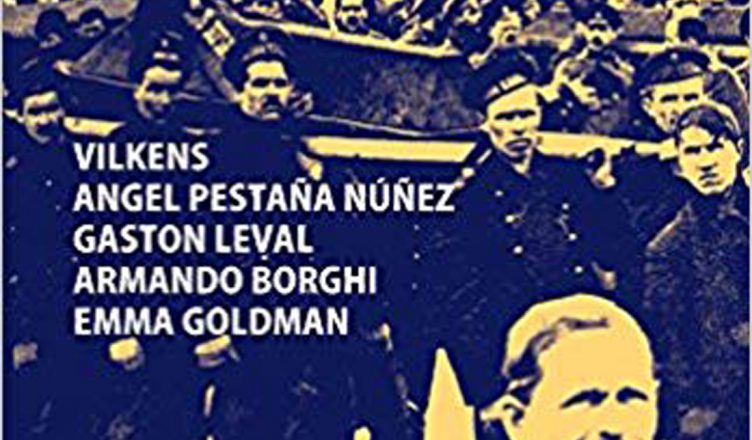 This book gathers together eyewitness accounts of the unfolding Russian Revolution by celebrated activists like Emma Goldman, Armando Borghi, Angel Pestana and Gaston Leval and the more obscure Vilkens. Tony Zurbrugg has translated the texts of Borghi, Leval, Pestana and Vilkens for the first time into English and indeed these invaluable insights into what was happening in Russia are long overdue.

Leval in particular further undermines the reputation of the Franco-Russian Victor Serge, once individualist anarchist and supporter of the illegalist Bonnot gang turned supporter and apologist for the Bolsheviks. Serge moved to Russia and served under Zinoviev in the Communist International. “Serge was known-but not liked-by some of the Spaniards, these men of the people were displeased by his aristocratic ways”… The interview I had … amazed me. Everything that Victor Serge told us ‘in confidence’(being convinced that, given our friendship, we would not betray him) contradicted what was affirmed, or what one might infer, from his writings.” Serge expressed horror at how the secret police, the Cheka, had got out of control, how the Communist Party had been invaded by opportunists, how he disliked Lenin. But Leval could not understand the contradiction between what he said in sworn secrecy and what he wrote for the revolutionary press in the West. Then he saw him repeating these arguments in public, justifying the machine gunning of people leaving Petrograd on the roofs of railway wagons because that was the only way they could visit their relatives in the countryside, the crushing of the Kronstadt sailors uprising against the Bolsheviks, because if justified it had been used by the counter-revolution, and the attacks on the insurrectionary movement in the Ukraine inspired by the anarchist Makhno because whilst doubtless sincere, it would have endangered the “broader whole”. “He spoke always of Russian anarchists and revolutionary syndicalists as being his friends, he even declared to certain French anarchists that he was still an individualist… but he added, these friends-although they might have undoubted good faith-committed errors and dangerous mistakes; and the Bolshevik regime whatever its failings was the only revolutionary option that remained; for the good of the Russian and world proletariat it should not be attacked2.

This two-faced attitude made Leval “sick at heart” as he saw him practising these manoeuvres ‘without conscious scruples’. When Leval eventually returned to the West he confronted Serge in print about his duplicitous attitude but Serge always avoided directly talking about the situation.

Of great importance are the texts by Vilkens, whose real name was Manuel Fernandez Alvar. Vilkens had gone to Russia with favourable opinions of the new Soviet regime. He was quickly disillusioned and his reports on How Workers Live, On Working Conditions, On Women, The Fiction of Soviet Democracy, Cells in Russia, the Cheka Dictatorship, Rural Life and the Revolution in 1920 are telling cutting through all the myths created by the Bolshevik propaganda machine. Particularly disturbing are the accounts of how members of the newly emerging Soviet bureaucracy abused women, with one Cheka (Soviet secret police) housing his three mistresses in magnificent villas This report On Women appeared in June 1921 and showed how corrupt the Bolshevik bureaucrats had become already. He enumerates many more examples of the bureaucrats exploiting women and concludes: “Women who want to be free in more than theory, want first of all to be free economically- since this is the foundation of every freedom. We did not see that the current state of things was transitory. This terrible prostitution can cease only with well-being for all, in an egalitarian society and with the disappearance of the Socialist State”.

His report on the Cheka talks about the number of former Tsarist magistrates incorporated into the new organisation of repression, as well as former Tsarist police agents working as Cheka commissars at border posts. He talks of the summary executions without trial, the already standard form of Chekist execution where the victim is shot at close range in the back of the neck and which continued to be used right up to recently.” I have met many insolent people, but never so many as in the Cheka. These people, given that they have the right of life and death over everyone, despise anyone who does not belong to the ‘corporation’ and with arrogance turn people out from their doors, treating them as slaves. The offices of the Cheka are populated by young men under the age of twenty, infatuated with their mission. They gossip, drink tea, and flirt with the young women examiners, ignoring the unhappy persons who await their decisions in cells and prisons. But it is a Chekist maxim that it is better to lock up many innocents rather than leave a counter-revolutionary at liberty. The thugs-Latvians for the most part- are well appreciated. I met one, in service to the M-Cheka of Moscow, a comrade highly esteemed by the Communists who married a young girl of the former aristocracy”.

Alongside these important reports is The Crushing of the Russian Revolution written by the famed American anarchist Emma Goldman. She had been expelled from the USA as a “dangerous alien” even though she had lived there most of her life and put on a boat for Russia. There she travelled widely and was shocked by the developments within the evolution that she saw there. Unlike other texts in the book, this was published in 1922 in the pages of the British anarchist paper Freedom.

This hard hitting report describes the subversion of the Revolution by the Bolsheviks Iy describes the disastrous forcible food collecting from the peasantry; the dismantling of the system of cooperatives which had emerged during the Revolution with 25, 000 branches encompassing 9 million people, but was attacked because it was seen as a threat to the centralised Bolshevik state; the creeing domination of the Soviets by the Bolsheviks; the militarisation of labour, where workers were arrested and sometimes shot for leaving the job. She describes the growth of the Cheka “spy, policeman, gaoler, and executioner, all in one.”. She states that many Chekists were actually recruited from the Tsar’s own secret police, the Okhrana, from the anti-Semitic gangs of the Black Hundreds, and from the former high officials of the Army.

Goldman describes the persecution of the celebrated Maria Spiridonova, veteran of the fight against the Tsarist regime, After suffering imprisonment and torture and rape from that regime, she again experienced imprisonment under the Bolsheviks. She goes on to describe the strict categorisation of rations, brought in as a result of Allied intervention and blockade. Instead of an equal system of rationing, the Bolshevik functionaries received the best rations. There is much more in this account and it complements the texts that have not been translated into English before.

A must read for anyone who really wants to understand the Russian Revolution, and whose enquiring minds are nor deterred by Leninist orthodoxy.