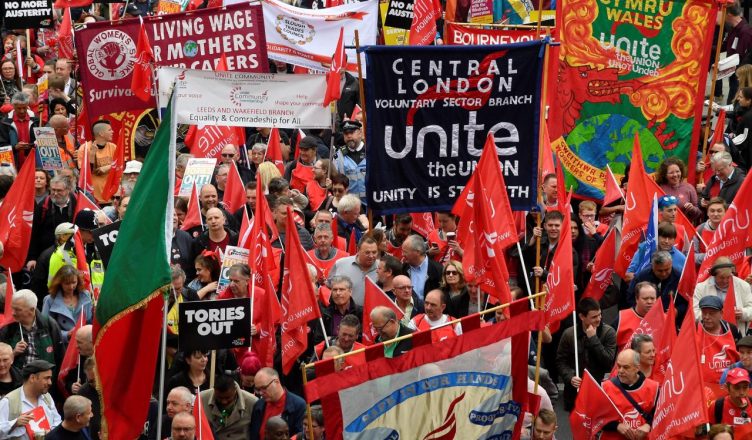 The demonstration organised by the Trades Union Congress in London on May 12th attracted tens of thousands from around England and Wales. It included large contingents of postal workers, rail workers, transport workers and seafarers, firefighters, health workers, shop and store workers, white collar workers in the civil service and other government agencies, teachers, etc., who marched under the banners of ASLEF, CWU, FBU, GMB, NAS-UWT, NEA, PCS, RCM, RMT, UCU, Unite, Unison, USDAW. Mobilisation for this was done primarily through union branches, the Morning Star paper and the various leftist organisations, with little or no street publicity.

What is the significance of this, the biggest demonstration in London in years?
The TUC pushed a New Deal in language reminiscent of the American New Deal of the 1930s and the old “a fair day’s wage for a fair day’s work”. The demands of this New Deal are:

1. We need a minimum wage of £10 an hour, now
2. Ban those exploitative zero hours contracts
3. Fund our NHS and public services properly
4. Repeal the trade union act which makes it harder for us to stand up for working people
5. Crack down on tax dodgers who starve our schools and hospitals of funding

In addition, the leadership of unions like the postal workers union, CWU, who seem to be a main architect of this New Deal, are talking about the end of zero hour contracts, fixed-term contracts, short-term contracts and specific event contracts, as well as the need to appeal to the young and organise unemployed workers.

The trade union bureaucrats in the TUC and allied unions are seeking ways of restoring their importance within the Labour Party and dream of the good old days of beer and sandwiches with Labour government leaders. They also wish to strengthen and reinforce the hold of Corbynism over the Labour Party. They are also concerned about the shrinkage of trade unions, which will affect their positions in the TU bureaucracies. They are responding to this by the merger of unions and by recruiting drives. The talk about organising unorganised workers is in response to the relative success of the base unions (CAIWU, IWGB, IWW, and UVW) in organising workers often neglected and considered “unorganisable” by the mainstream trade unions.

At the same time, the large turnout on this demonstration shows a mounting anger within the working class in the UK against privatisation, wage freezes, work conditions and attacks on pensions and social services. The trade union bureaucrats need to respond to this by the usual safety valve of an A-B march. In addition they are talking about raising the need for a day of action at the approaching TUC Congress. This day of action would take place “early in the New Year”!

Cast your minds back to the TUC Congress in 2010 where there was much talk about militant action and finally a day in March the following year (!) was assigned. There were half a million on that march on March 26th 2011. Again it was the usual A to B march with nothing achieved. The same thing happened in July 2014 with another A to B march, followed by days of action and strikes called by trade unions on different days (!) in October of the same year. The safety valve tactic was used once again and the TUC maintained a radical aura by talking militant (and actually doing nothing). Meanwhile the attacks on the NHS, pensions, wages and work conditions have continued without letup.

Workers have gone into action without waiting for the trade union bureaucrats to tell them what to do and they have done this all over the world. The trade union bureaucrats and their allies in the UCU Left sabotaged the recent university lecturers’ strike. Workers have to start organising at a grassroots level. We should not wait for a worthless day of action or the possible election of a Corbyn government at some point in the future. We need to rely on our own strength, solidarity and organisation.

Apart from ACG comrades distributing propaganda there was no visible presence of anarchists. This is not surprising taking into consideration the increasingly marginalised and ghettoised “anarchist” “movement” in the UK. Nor was there the presence of a Radical Workers Bloc as on previous TUC demos. Serious class struggle anarchists need to fight this malaise, look for unity with those of a similar mind, and increasingly turn away from the anarchist ghetto and face outwards towards our class.