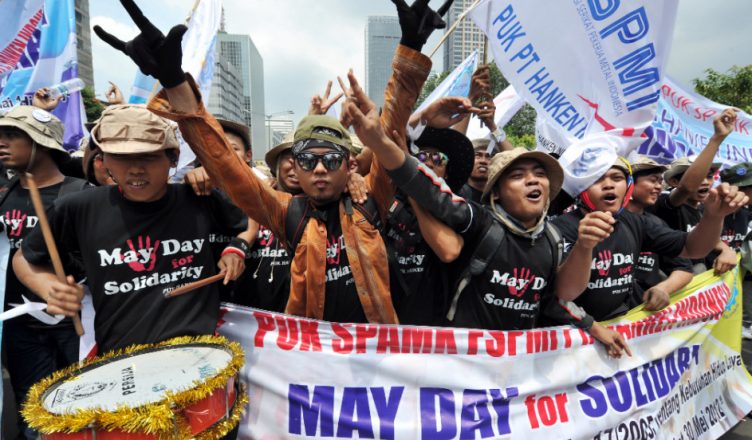 The ACG reports on a selection from what happened around the world on 1st May, International Workers Day

Bangladesh
In Sylhet region, anarcho-syndicalists organised a march in the countryside and then held a teach-in for local youth under a red and black flag.

Chile
A combative march in Santiago was attacked by police with water cannon.

France
200,000 turned out on marches throughout France against the austerity measures of the Macron government.

In Paris 70,000 turned out. The joint demonstration by the French anarcho-syndicalist union the CNT, and the anarchist organisations Federation Anarchiste, Alternative Libertaire and the Coordination Des Groupes Anarchistes attracted 2,000 at midday. In the afternoon a black bloc attracted 1,000 and fighting broke out with the riot police.

Indonesia
In Bandung at least 500 anarchists marched behind a huge banner displaying the words “Destroy Capitalism”.

In Jakarta a goon squad of the reformist Confederation of All Indonesian Workers Union attacked anarchists who later denounced these “rancid bastards from a yellow union”.

In Yogyakarta anarchists set up barricades outside a university but were again attacked by the same crowd and helped in handing over anti-authoritarian students to the police.

Iran
Thousands demonstrated against the austerity measures of the government, including workers and pensioners. Chants included “Death to the government, hail to the workers”.

Puerto Rico
Eight different marches were meant to coordinate at the financial district of Milla de Oro. However, the police blocked access and fired gas.

Sri Lanka
Thousands of workers defied the government ban on May day marches because of a Buddhist festival on that day.

Turkey
The same scenario with thousands turning out despite government bans.

USA
Anarchists demonstrated in many towns whilst the school strike continued in Arizona.