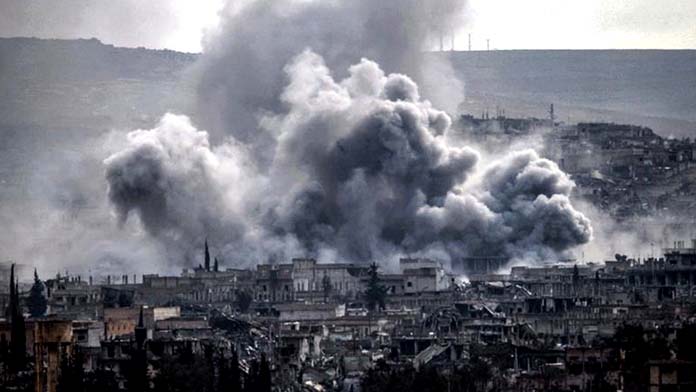 A hundred cruise missiles were launched against the military installations of the Assad regime. In the aftermath the US Ambassador to the United Nations, Nikki Haley, stated that the United States was “locked and loaded”. Together the US, France and Britain have engaged in bombings that will be of no benefit to the Syrian masses suffering under the murderous regime of Bashar Assad.

It can be seen that all three regimes in the USA, France and Britain have their own domestic problems, and that a military adventure is always a good ploy to divert attention. Trump is wrestling with the ongoing Muller investigation, the revelations of ex-FBI Director Comey, and ongoing legal wrangles with porn star Stormy Daniels and polls that show his lack of popularity. Theresa May is faced with serious divisions in her own Party, deepening problems over Brexit, not to mention that she is hanging on to power thanks to an alliance with the DUP. Macron faces increasing unrest at home with what looks increasingly like a re-run of May 1968.

Trump was elected President on a populist programme, but part of that programme was that he would withdraw troops from Iraq and not be involved in military adventures in the Middle East. This was in stark contrast to Hillary Clinton who maintained an aggressive stance towards Russia and calls for a no-fly zone over Syria that would have caused confrontation with Russia, Assad’s ally. Now Trump has betrayed his populist base, to the horror of some of his previous conservative backers.

Haley has stated that the US would maintain its troops in Syria and would start sanctions against Russian firms doing business with Assad.

Some of the most virulent critics of Trump have been papers like the Washington Post. In a lead editorial just after the bombings it criticised the joint US, French and British attack as inadequate and attacked Trump for saying that he had been ready to withdraw American troops from Syria. Similar views were aired in anti-Trump paper the New York Post. It is clear that a substantial part of the US ruling class wish to pursue a more aggressive attitude towards Russia and its allies. They are concerned by the new alliance between Russia, Turkey and Iran and the weakening US influence in the Middle East.

For the last quarter of a century, the US and its allies have been engaged in constant warfare, using fabricated excuses like the bogus weapons of mass destruction to dismantle the regime of their former ally Saddam, overthrow Gaddafi in Libya because of an “imminent” massacre of civilians and now the gas attacks by the Assad regime.

The attacks on the Syrian regime were not a last minute response but the result of plans prepared over many months as can be seen by the high level of coordination between the three state powers.

Large sections of the US ruling class including the leaders of the military have little confidence in Trump being able to oversee moves against Russia and its allies. That is why the campaign against Trump is increasing in intensity at the same time as aggressive moves by the US and its allies. This has been explicitly stated by neo-conservatives who link the removal of Trump to the expansion of war moves.

In the USA, France and Britain there is widespread anti-war feeling and this has been aggravated by the bombing attacks. In Germany, sections of the ruling class there have expressed the need to re-arm and, at the same time, pursue foreign policies less dependent on the USA. This turn is justified by lauding German “high moral and humanitarian standards”.

Assad is a bloody dictator and it is highly possible that he used gas attacks against the Syrian population. However those who condemn Assad are the same States that justified mass bombings of Hamburg and Dresden and two atom bomb attacks on Japan during World War Two, the use of the chemical Agent Orange in Vietnam, as well as the deployment of napalm there and previously in Greece, and the use of white phosphorus in Fallujah by the US Army in November 2004, or the deployment of chemical weapons in 1988 in Halabja by the Iraqi Baath regime, then the ally of the West. More recently, the British government has had few qualms about providing the weaponry used by the Saudi Arabian military to kill numerous civilians in Yemen.

The USA realised it has lost influence in the Middle East. It and its allies initially backed the Islamist militias in their attempts to overthrow Assad. Now ISIS is a shadow of its former self and Assad controls 75% of Syria. Russia had been warned before the bombing attacks with the hint that its own forces and bases there would not be touched. Nevertheless it was implied that the USA was still the only surviving superpower and that Russia should not overstep the mark.

Russia will not easily abandon its ally, Syria. It needs the Mediterranean ports that Syria provides. On the other hand the USA would like to confine Russia to the Black Sea and is seriously concerned about the new alliance, temporary though it may be, between Turkey and Russia and the increasing strength of the Shiite axis in Iran, Iraq and with Hezbollah in Lebanon.

Israel launched its own attacks on its old enemy, Syria, obviously with the approval of the USA. For its part, Turkey is looking to increase influence and presence in Syria and has moved against the Kurdish controlled enclave of Afrin, exploiting the tensions between the great powers.

Whatever the outcome, it is clear that the different world and regional powers are gearing up for more armed conflict. In Syria over 400,000 people have been slaughtered and many more have been displaced. The situation is the same in Iraq. The masses there have nothing to gain from the murderous and barbarous depredations of the different armed gangs, whether they be Russian, American, Turkish or Islamist etc. Only revolution to overthrow all these regimes offers any alternative.

For now, we call on all internationalist and class conscious workers, communists, anarchists and revolutionary socialists to come together under the ‘No War But The Class War’ banner to promote working class resistance to the bosses’ war machine.

War Is The Health of The State!

No War But The Class War!