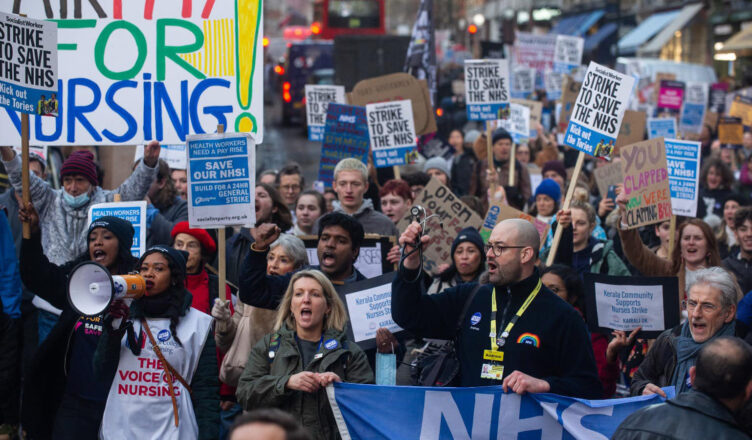 If you think the nurses’ strike is just about wages, think again.

Yes, nurses are 20% worse off in real terms  than they were ten years ago and nurses are demanding a 17.6% pay rise which barely keeps up with inflation.

Tory ministers are saying that nursing should be a vocation and so pay is irrelevant. For example, Chris Heaton-Harris, the Northern Ireland secretary, said it was “difficult to judge” whether nurses were currently paid enough and believed their job was “a vocation”, saying  that nurses had a starting salary of £27,000 rising to around the mid-£30,000s, and asked: “Is that enough? Who can put a value on care like that?”

It might be a vocation but it needs to be one that is affordable.  This has had a massive effect on recruiting to nursing, and it is no longer considered as a career option. As a result experienced nurses are leaving whilst fewer are coming into nursing jobs.

In September 2022 there were 47,496 nursing vacancies according to NHS Vacancy Statistics England April 2015-September 2022.

A survey by the nurses’ union the Royal College of Nursing (RCN) found that only 25% of shifts had the planned number of registered nurses, 83% of nurses reported insufficient staff to meet patient needs safely and effectively and only 18% had enough time to provide care levels they would like. There are staff that never have the full complement of safe staffing levels. As a result many nurses are exhausted. This is bad for safety levels and bad for nursing staff.

The RCN Employment Survey 2021 indicated that three-quarters of nursing staff worked beyond their contracted hours at least once a week, with 17% doing this on a daily basis.

Nurses are angry and this was seen in the large number who went out on strike on 15th December, a staggering 100,000. This was the largest nursing strike in the history of the NHS. This was followed by more strikes on the 20th December. There was large support for their strikes, with picket lines being reinforced by supporters on a large scale.

Nurses will be out on picket lines again on 18th and 19th January. The Conservative government is taking an intransigent stance against health workers and undoubtedly the media will drum up ill will towards the strikers, accusing them of negligence and of causing discomfort to patients. Don’t be fooled by this. It has been the policy of both Conservative and Labour governments to run down the NHS over the last few decades. Because of this patients are dying every day. This is not the fault of NHS health staff. Those striking are attempting to defend the health service. They need our maximum support.

Health Secretary Steve Barclay has refused to discuss the pay claim with RCN leaders. Pat Cullen, RCN General Secretary, had attempted to argue that the strikes did not need to go ahead and indicated that the RCN would accept a pay deal that was below inflation. This cut no ice with Barclay, who went on to turn down calls by the NHS’s pay review body to take into account rising inflation. Meanwhile Tory chairman Nadhim Zahawi said that striking nurses were playing into Putin’s hands! He told Laura Kuenssberg of the BBC: “This is exactly what Putin wants to see-division”. He went on Sky News to say: “We have to come together to send a clear message to Mr Putin that he can’t use energy as a weapon in this way. This is not a time to strike, this is a time to negotiate”.

This government wants to cow health workers in line with its continuing plans to dismantle the NHS. We cannot rely on the union leaders, always ready to make compromises, as with Cullen’s willingness to talk about below inflation deals or with the GMB’s decision to call off the ambulance strike on 28th December. Neither can we rely on the Labour Party. Keir Starmer called the nurses’ pay claim “unaffordable”, and the Shadow Health Secretary Wes Streeting backed this up (see The Real Face of Labour here on the ACG website).

The nurses will need to rely on their own self-organisation and increase links with the striking ambulance staff and with other striking workers. Coordinated and united strike action needs to be developed alongside the creation of strike committees that can build towards this.

Update: Despite Rishi Sunak’s U-turn on agreeing to new pay negotiations, the strikes by paramedics and nurses will go ahead with Steve Barclay now talking about a possible lump sum payment or backdated pay deal. This government is now vacillating, and determined strike action can bring about a victory, if we rely on rank and file organisation and look out for any sellout by union bureaucrats.