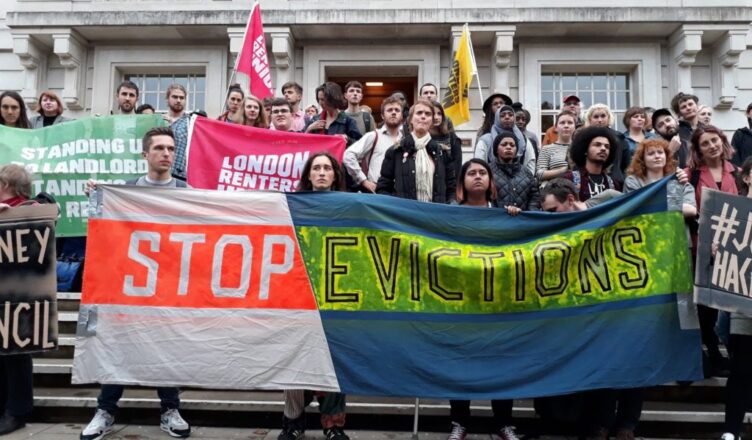 “London Renters Union members are reporting huge rent rises of as much 30% or even 50%. Landlords and estate agents are using the cost of living crisis as an excuse to squeeze tenants and boost profits. They get richer while the rest of us suffer” (https://londonrentersunion.org/rent-rises/).

Housing costs already make up a very high percentage of people’s spending. It is recommended that people spend no more than 30% of their take-home pay on rent but in London, and most other cities, this is impossible. In London people pay almost 50% of their income on rent and it is worse the lower paid you are. The cost of a new rental agreement rose by 12% this past year. Meanwhile, earnings have increased by only 6%.

There is a shortage of privately rented accommodation. This is due to the increase in demand from those unable to buy their own home and lack of public housing.

However, it is also due to the fact that in tourist hotspots such as London, landlords are renting to tourists at vastly inflated prices. Renters are forced to share flats, living in cramped and often poorly maintained condition.

Meanwhile, many landlords make huge profits.  “The UK’s largest listed residential landlord Grainger reported a huge boom in profit before tax of 96 per cent off the back of soaring demand” https://www.cityam.com/private-landlord-titan-graingers-profits-surge-by-96-per-cent-due-to-strong-rental-demand/).

In response, hundreds of renters across the UK went out on the streets to call for a rent freeze. In Stratford, East London, renters set up tents, mattresses and food stalls outside the office of Foxtons estate agents.

Foxtons signalled a 25% rise in profits in the third quarter of 2022, previously awarding massive bonuses to its senior management whilst making money from the government’s furlough scheme during the Covid lockdown. London Renters Union reported an average rent increase of £3,378 (20.5%) per year, with some renters facing rises of 50%.

This situation is completely unacceptable. It doesn’t make sense that landlords can put up rents just because people are desperate to find a place to live. But this is how the capitalist market works- an increase in demand leads to higher prices. Instead of housing being a right, it is a source of profit for those with enough money to buy up properties- the big corporations and well as buy-to-let landlords.

In an anarchist communist society, housing would be free to all- provided and maintained by all of us working together. It would be distributed according to need, so that people with larger households would get bigger places and we would not see rich families occupying massive houses. The system of distribution would be fair and involve everyone in making decisions- not the market, not the landlord, not the State.