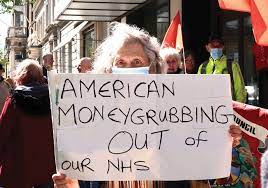 The ongoing dismantling of the NHS continues. However one small victory has been won with the NHS North Central London Integrated Care Board being pressured into taking a decision not to renew the contract of an American private health corporation.

Centene/Operose Health ran the Hanley Primary Care Centre in Islington, in north London. It took over a number of GP surgery contracts in 2021. The Hanley practice was linked to the private health giant Centene Corporation via its British subsidiaries, AT Medics and Operose Health.  Campaigners around Islington Keep Our NHS Public warned of privatisation by health after it was revealed last year that AT Medics had merged with Operose Health, the UK branch of Centene last year.

AT Medics had contracts to run both the Hanley centre and Mitchison Road Surgery. Following the takeover Centene now ran these two centres, as well as four others in the borough of Camden.

Both Hanley and Mitchison Road performed badly with one patient testifying at a Town Hall meeting in September that it was easier to go “DIY doctoring on Google” than get a face to face appointment with a GP.

The Integrated Care Board released a report in late October showing that the Hanley practice had an under-provision of 2.8 “working time equivalent” GPs and offering 270 too few appointments each week. It also found that there was an overprovision of nursing appointments.

This follows concerns raised in a Panorama investigation in June on the overuse of nursing staff as opposed to GPs. Attention was drawn to the operations of AT Medics and Operose Health. Street protests in Islington further publicised the workings of Centene.

All of this puts a spotlight on the continuing privatisation of the NHS and the capture of GP practices by companies only concerned with profit.