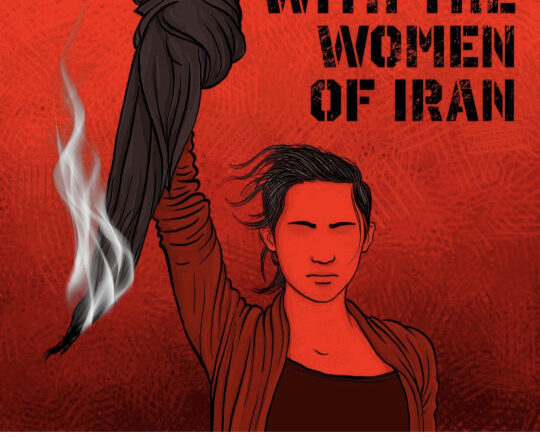 Mahsa (Jina) Amini was visiting Tehran with her brother on September 13th. She was a 22 year old from the Kurdistan province of Iran. She was arrested by the morality police, the Gasht-e Ershad, near an underground station in the centre. The reason for her arrest? She was wearing her headscarf (hijab) loosely around her head and neck. For the morality police this was in an “improper” way. They told her brother that she would be taken to a ‘briefing class’ at a detention centre and would then be released. However, soon after, she was taken to Kasra hospital in a coma and died there on September 16th.

The police then rushed to deny that there had been any violence used by the morality police. Photos show blood pouring from one of Mahsa Amini’s ears, and the lawyer Saeed Dehghan stated that Mahsa had suffered fractures to her skull and had been murdered. Furthermore, officials at Kasra Hospital put out a statement that she was already brain-dead when she arrived there.

Hundreds of people began gathering outside the hospital immediately after the announcement of Mahsa Amini’s death. Demonstrations spread to other parts of Tehran and to cities in Kurdistan with a total of 20 rallies to protest her death.

The police responded with tear gas and began arresting demonstrators. Slogans began to be chanted such as “Women, life, freedom”, “Death to the dictator”, “Killed for a hijab- how much more humiliation?”

The Internet in Iran became flooded with messages of protest and the Iranian government responded by shutting down in parts of Tehran and Kurdistan, blocking access to Instagram and WhatsApp.

Young women began burning their hijabs and this was broadcast through a video seen thousands of times on Twitter. On the university campuses in Tehran many women demonstrators removed their hijabs and held them in the air as a protest. Some shave all of their hair off in protest. Many stood in front of the police without hijabs in defiance.

The demonstrations began quickly to voice demands for the overthrow of the Islamic Republic. Calls for a general strike were advanced. In response the Iranian President, Ebrahim Raisi was forced to state on September 18th that there would be an investigation into the morality police. For their part the Revolutionary Guard, the paramilitary organisation that enforces the rule of the Islamic Republic, called on judges to prosecute anyone who “spreads fake news and rumours” on social media.

The police and Revolutionary Guard opened fire on demonstrations and at least 17 people were killed and hundreds injured. The Iranian State began to orchestrate counter-demonstrations where the executions of “offenders of the Qur’an” were demanded. Meanwhile the so-called Ministry of Intelligence labelled protestors as seditionists opposed to religious values.

We have previously reported here on the ACG website about waves of protest in Iran, in 2019, 2020 and 2021. Unfortunately, these were quickly repressed. However this current upsurge seems to be acquiring some magnitude, in particular with the courage and determination of the demonstrators, particularly the young women. It comes at a time when there is deep discontent over the growing economic hardships, concern over global warming, and disgust at the extent of official corruption.

Police cars have been overturned, police stations burnt to the ground and mass anger has been concentrated on the police and Revolutionary Guard.

Raisi has now said that the regime must ‘deal decisively with those who oppose the country’s security and tranquility’.

The supreme leader Ayatollah Ali Khameini is likely to die soon and the revulsion of many at the imposition of religious regulations, with an independent survey in 2020 indicating that 72% opposed compulsory wearing of the hijab, point to big changes coming. The Islamic Republic must be overthrown and the Gasht-e Ershad and Revolutionary Guard defeated and smashed. This can only come about through mass action, with the working class and the poor and women taking a leading role.

The regime of the Western-backed Shah was overthrown in 1979 thanks to the actions of the masses on the streets.  During the course of that revolutionary upsurge, we saw the appearance of shoras, or working class committees, that had emerged from the strike movement against the Shah. Unfortunately, the Iranian Revolution was subverted by the forces of clerical reaction and the Islamic Republic was imposed, ruling for the last four decades.

The present situation offers possibilities for the emergence of a new revolution, the overthrow of the theocracy and the establishment of a new society based on freedom and equality and the ending of the State and capitalism. This would have immense repercussions for the whole Middle East and would renew revolutionary hope. Time will tell whether this happens.