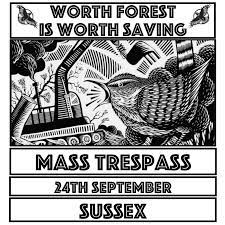 On Saturday September 24th hundreds of people, including members of the Anarchist Communist Group, explored the woodland of Worth Forest south of Crawley in Sussex which includes the woodland of Oldhouse Warren that is set to be destroyed by the proposed Center Parcs development. The company stresses how many jobs will be made available by its development of a holiday village at Oldhouse Warren, but given the fact that the hospitality industry is struggling to get workers it seems that this is just a ploy to get local support for a development that will bring huge profits to Center Parcs. And in any case, should we really be making such decisions based on economic arguments? The value of such as wood is immeasurable. If the landowner and Center Parcs gets the go ahead, this will destroy 553 acres of an Area of Outstanding Natural Beauty, a woodland of oak and beech trees. The ramble showed the amazing diversity of trees and other species. It is truly a special place. The organisers stressed that it is important that people love a place so they will fight to save it.

However, loving a wild place is not enough. Decisions about how land is used is dominated by who owns it- the landowner. It is difficult to find out information about the private landowner who is supporting the Center Parcs plans. One spokesperson for the Landscapes of Freedom campaign identified the owners as the Pearson family, the head of which is Michael Pearson,Viscount Cowdray, but this was not made explicit in any of the publicity material for the trespass.

“The sprawling Cowdray Estate, the biggest single landholding in the South Downs National Park, belongs to the Pearson family, whose estimated wealth of £240m comes from publishing. The first Viscount Cowdray was given his peerage in 1917 by Liberal Prime Minister David Lloyd George (whose son had been employed by the businessman). Lloyd George’s hatred of the old landed aristocracy and penchant for handing out peerages to newly-rich Edwardian industrialists ultimately led to the cash-for-peerages scandal.”

However, it is impossible to find the Pearsons linked to the Center Parc development. The name of the trust associated with Oldhouse Warren is Paddockhurst Estate, owned by Trustees (http://www2.westsussex.gov.uk/Landowners/ca16_2_17_worth.pdf). It appears that the Pearson family is behind this (See: https://www.countrylife.co.uk/out-and-about/theatre-film-music/telling-an-estate-by-its-colours-16759).

The secrecy of who owns the land makes it hard to target the real culprits. The land should not be in the hands of private owners at all. As Landscapes of Freedom argue, it should be a people’s wood.

The Council for the Protection of Rural England oppose the development but say that it would be suitable elsewhere and say nothing about the landownership issue. It seems most organisations do not question private landownership, only what is done with the land. However, we can never ensure that land is actually used for the benefit of all without land reform. If land is still in the hands of landowners, often shrouded in secrecy, and seen as a source of profit by both companies and government, then our efforts to obtain reforms such as the fight to save Oldhouse Warren, will be limited.

Center Parcs wants to build 900 lodges, a plaza, restaurants, shop, spa, roads and cark parks as well as a ‘sub-tropical swimming paradise’ on Oldhouse Warren. It wants to turn nature into another commodity. It will turn the forest from private ownership to corporate ownership.

This must not be allowed to happen! Resistance to Center Parcs and Pearson needs to move up a few notches, going from gentle rambles to occupation of the woodland and pickets of Center Parcs Pearson plc. The Pearson family pose as enlightened hippy aristocrats, into chakras, permaculture and silent meditation. Their hypocrisy must be broadcast far afield.