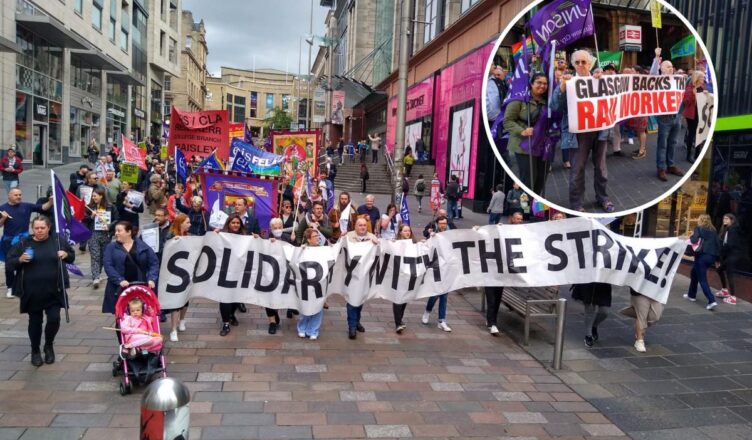 The discontent in British society is moving from simmering to boiling as more and workers go into action, either in official strikes or in unofficial wildcat strikes.

The conditions created by Brexit and then by the Covid lockdown pushed workers to agitate around pay demands. This situation was further aggravated by the war in Ukraine, with scarcity of foodstuffs and raw materials causing price rises and a willingness by capitalists to take advantage of this. Inflation is now running at 13% and rising. Employers are offering pay offers of between 2 and 5% often after years of pay freezes in some sectors. In other words many workers are facing what in fact is a pay cut. The Bank of England responded by pushing up the base rate by a half percent, the highest increase since 1995. This will mean that more and more people will not be able to keep up with their mortgage payments.

As a result of this situation, more and more workers have taken to industrial action over this summer. This includes workers organised in the rail unions, in RMT, ASLEF and the TSSA. Forty thousand RMT members went out on strike for two days in the week ending August 21st, and were joined in London by London Underground and London Overground workers and by bus workers in West London working for the London United bus company, as well as some rail workers in the TSSA.Train drivers in ASLEF have also taken strike action over the last two weeks across Britain.

Elsewhere, around 2,000 workers organised in the Unite union will go on strike at Felixstowe, the largest container port in Britain from August 21st to August 29th. Approximately 50% of the UK’s container traffic comes in through Felixstowe. This will undoubtedly have a drastic effect on the supply of food and raw materials, already in a parlous state.

On Wednesday, August 24th, many wildcat strikes are expected to happen at construction sites and refineries.

On Friday August 26th , 115,000 Royal Mail workers in the CWU union will go out on a one day strike, and will be joined by 2,000 workers in the Post Office Crown Office who will start a two day strike. This will be followed on Tuesday August 30th by a strike by 40,000 BT and Openreach workers, and by Post Office administration and supply chain workers.

Bus workers working for the Arriva bus company have continued industrial action in north west England and in Bedfordshire, Buckinghamshire, and Hertfordshire, as well as in north London, Kent and Essex.

Hundreds of workers at the Grangemouth oil refinery in Scotland went out on a wildcat strike last week. They will be taking wildcat action again on August 24th (see above).

Amazon workers went out on wildcat strikes too. In Bristol they went on strike and organised a sit-in at the BRS1 centre. On the same day Amazon workers went on wildcat strike at Rugeley. Workers also walked out on the same day at the BHX1 Site in Rugeley. Earlier wildcats took place at Amazon centres in Coventry and Tilbury and at Swindon. Amazon workers at fulfilment centres in Dartford, Tilbury, Belvedere, Hemel Hempstead, Chesterfield and Rugeley operated slowdowns in work last week, refusing to pick more than one package an hour.

Workers in the Unite union at Dundee University plan to go on continuous strike from August 25th whilst workers at the AQA exam board struck for four days and plan to come out again on a five day strike. Meanwhile workers at the posh London store Harrods are balloting for strike action. Bin workers throughout Scotland are also due to come out on strike.

These waves of militancy have alarmed the boss class. They know that the summer of strikes will be followed by increasing industrial action in the autumn. The Tory Transport Secretary Grant Shapps has threatened to introduce more guard-less trains and strike bans for the transport sector. Both the candidates for the next Tory leadership, Liz Truss and Rishi Sunak, have talked tough about cracking down on industrial action.

As for Keir Starmer and the Labour Party, they too are horrified by this wave of militancy. They are intent on attempting to prove to the bosses that they are the most competent party to deal with working class militancy as they have done before.

What is needed is for workers to make sure that they come out on strike at the same time. The next opportunity for this is August 31st, with many workers already due to strike that day. This should be accompanied by rallies and demonstrations in local areas. Pensioners, the unemployed and youth (school students and college students) should support the strikes and reinforce picket lines, rallies and demonstrations. Local solidarity committees should be created in neighbourhoods, involving both striking workers, pensioners, unemployed and students.

We cannot trust the union leaders to carry out a successful outcome to these strikes, even the most radical sounding of them like Sharon Graham and Mick Lynch. The latter, despite his previous criticisms of the Starmer leadership, was ready to endorse Starmer by saying “I want him to be prime minister. That’s what we’ve got. He must win. We’ve got to push him and persuade him to get into a position where he’s in the front rank with you, all of you.”

But Starmer has already made his position clear. He is opposed to strikes and to any meaningful action by workers. He is our enemy. The union leaders are desperately trying to stop workers breaking with Labour. We know that Labour has consistently throughout its history opposed itself to strikes by workers. In the coming months Labour will stand side by side with the Tories in denouncing these strike waves. As for the union leaders, they will attempt to sabotage any meaningful action. We as workers must resist and develop our own grassroots organisations, not just in the workplaces but in the neighbourhoods.