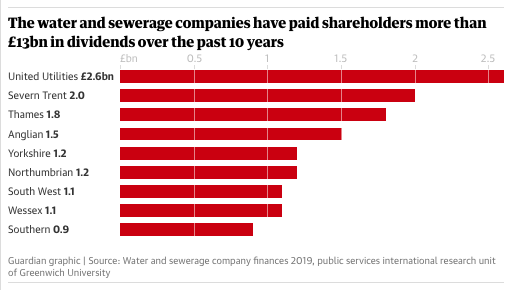 In 1989 the Thatcher government privatised the water industry. As a result it is now in the hands of a small number of private companies.

In 2020 these companies were reported as having paid out a staggering £57 billion in dividends to their shareholders between 1991 and 2019, averaging £2 billion a year. These companies are being run purely for profit whilst they refrain from investing in infrastructure, leading to massive leaks. In addition, they have failed to build any new reservoirs in the last three decades.

When Thatcher privatised water, she wiped out the massive debt they owed before privatisation was complete. Since then, they have once again gone into debt by billions. They have paid out these huge dividends to shareholders whilst massively increasing water bills. At the same time the executives of these water companies have awarded themselves huge bonuses.

One company, Wessex Water, had to pay out £35,000 for a repair bill after it failed to maintain a sewer main leading to a burst in a national nature reserve in Dorset. In 2021 it had to report five serious water pollution incidents. Huge islands of shit were reported by swimmers in Somerset’s rivers earlier this year. One would have expected that Wessex Water would have suffered because of this. But instead, Mohammed Saddiq, the executive director of operations at Wessex Water, was appointed as the new Lord-Lieutenant for Somerset!

Thames Water was compelled to admit that it loses as much as 600 million litres of water a day in leakages, almost a quarter of what it collects. Other water companies who have failed to reach targets for cutting back on water leakages are Northumbrian Water, South West Water, Southern Water and Affinity Water. All in all, the water companies lose 3 billion litres a day, according to the National Audit Office.

In the borough of Islington, in north London, on 8th August at the height of the drought, a water main burst in Hornsey Road. Around 50 properties were damaged, four people had to be rescued, a sports centre had to be closed because of flooding, and thousands of households were left with no water. Six postal areas were affected.

Feargal Sharkey, former lead singer for the Undertones, who now campaigns around water issues, tweeted: “Now you know what decades of underinvestment looks like. Hornsey Road, London, N7 at 8:30 this morning. Wouldn’t that be right @thameswater.”

Thames Water was responsible for two separate floods in Islington due to water leakages in 2016.

Later in August, in Wolverhampton, Severn Trent Water was slow to respond to a massive leak, even though its reservoir was only 58% full. The chief executive of Severn Trent Water, Liv Garfield, is the highest paid water boss, earning more than £17.3 million since 2014.

Instead of investing in repairs and renovation of infrastructure, the water companies would rather inflict hosepipe bans on ordinary people.

The water companies need to be booted out of water supply which should be socialised under the control of water workers and those who it supplies. This can only come about through a social revolution, one which is increasingly becoming an urgent necessity.