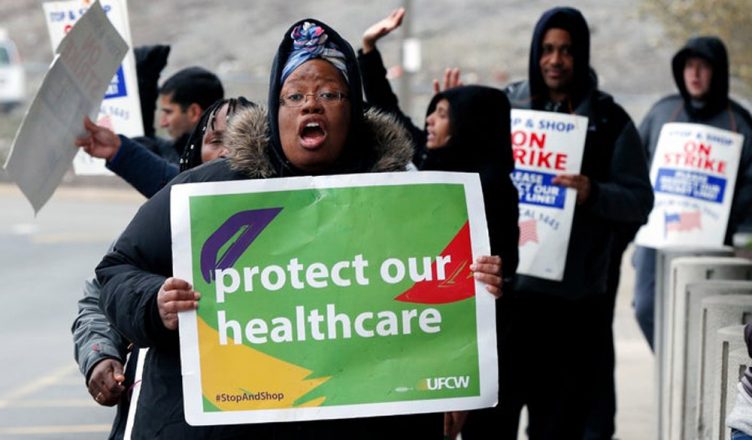 Ten thousand grocery store workers in the Portland area of Oregon voted to strike at the supermarket chains Albertsons, Fred Meyer, QFC and Safeway over the decision by these employers not to offer new contracts over the coming year. The vote for a strike was almost unanimous.

Another 15,000 grocery workers in other areas of Oregon and Southwest Washington are due to vote for strike action in the next two months. Workers are demanding an increase in wages that keeps up with the rising cost of living.

In southern California 46,000 grocery store workers employed at Albertsons, Ralphs and Vons have already voted to go out on strike. Truck drivers have pledged not to deliver merchandise to supermarkets during the strikes.

Supermarket workers should beware the machinations of the union that most of them belong to, the United Food and Commercial Workers Union (UFCWU). They recently sabotaged a strike at the Stop and Shop chain, refusing to pay strike pay to workers. If the strikes happen, they should be under the control of the workers themselves. The union bureaucrats cannot be trusted.

Meanwhile carworkers at Ford, Fiat Chrysler and General Motors plants are increasingly dissatisfied. They are pushing for higher pay increases and the end of the two-tier system whereby temporary part-time (TPT) workers are paid less, as well as a reintroduction of a pensions system.Negotiations between the United Automobile Workers (UAW) union are due to take place soon. The UAW has long colluded with the car bosses, but the pressure from the shopfloor is increasing, with rising anger about the rising cost of livings and spiralling rents where some car workers have resorted to sleeping in their vehicles.

Workers at an Amazon fulfilment centre at Shakopee, Indiana, plant to strike for six hours on July 15th. That day is the company’s “summer sales extravaganza”, Prime Day. Amazon has failed to turn temporary workers into employees, and failed to ease productivity quotas tthat are extremely onerous for its workers. In solidarity some white-collar Amazon engineers plan on going to Minnesota to support the action. In addition to the demands for easing quotas and making tempiorary workers permanent, they will demand that Amazon take action over climate change.

This growing class anger has already been indicated by teachers strikes in 2018 in Washington and California.

The illusion among some workers that Trump is their friend is being dispelled. He promised to save US manufacturing when elected. In fact almost 200,000 jobs have now been moved abroad, to India, Mexico, etc., with the rate of “offshoring” as it is known, actually increasing under Trump. More specifically, Trump promised to save the Carrier factory in Indianapolis. Since then hundreds of Carrier workers have been laid off.