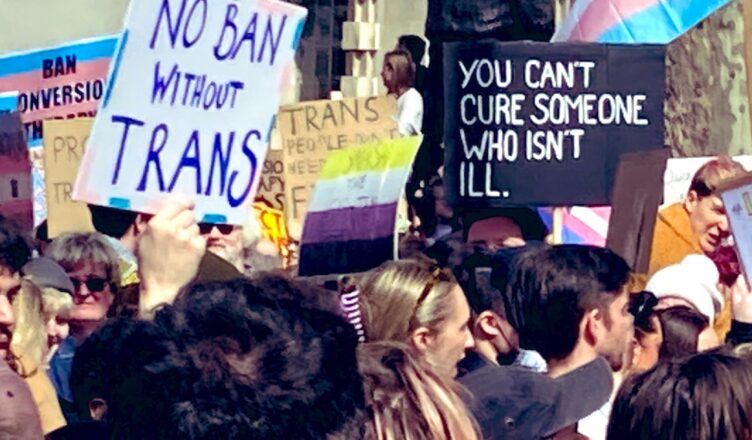 Protestors gathered in Central London today (Sunday 10th April), to protest against the Government’s decision to not ban so-called conversion therapy for trans people. The demonstration focussed on Downing Street from 1pm today, with organisers saying that at least 3,000 people had turned out in solidarity with trans people.

Conversion therapy includes medical, psychiatric, psychological, religious, cultural or any other interventions that seek to change, “cure”, or suppress the sexual orientation and/or gender identity of a person. The World Health Organisation removed homosexuality from the international classification of diseases in 1990. Despite that, attempts to “cure” LGBT people in the UK are still legal and still happening.

While France’s law banning conversion therapy, which gives no exemptions for religious conversion therapy, recently passed its final stages, with Macron correctly declaring “being yourself… is nothing to be cured”, the UK government has dithered, u-turned, and dithered again, in line with the ongoing battle between neoliberalism and neo-conservativism for ideological supremacy in the UK Tory Party.

In the words of the petition before parliament, “It’s shameful that the UK intends to deliberately exclude trans people from a ban in contrast to the approach taken by many countries, despite trans people being at a greater risk of experiencing the harmful & degrading practices.

The government’s own figures show that trans people are nearly twice as likely to be at risk of experiencing the harmful & degrading practices of conversion therapy”.

Campaigners have accused government proposals of “falling short” by including a loophole for “religious counselling”.

The ACG has previously noted that transgender people are more likely to be working class, disproportionately facing poverty, workplace discrimination, and unemployment. This discrimination is a structural feature of capitalism, and we reaffirm our belief that trans rights is a class issue.

We stand in solidarity with trans people as they seek the same protection from abusive so-called therapy being promised – though not yet delivered – to other sections of the LGBT “community”. There is no excuse for abuse.