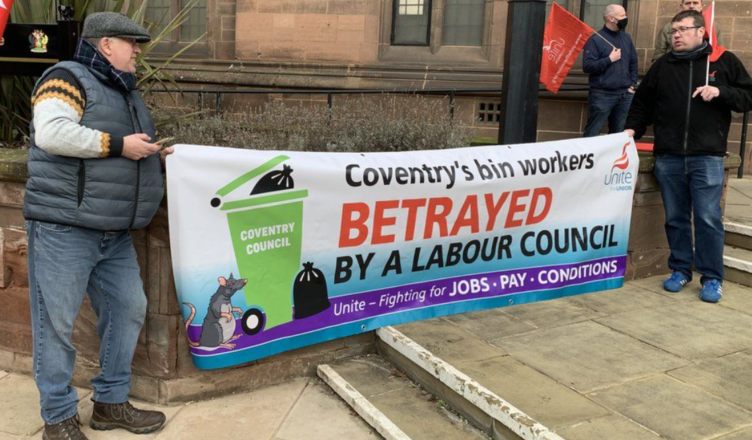 Seventy-five bin lorry drivers have been on strike since January 31st. The Labour Council has used Tom White Waste, a private contractor that is completely owned by the council to run refuse collections, scabbing on the striking bin workers.

The strike has become increasingly bitter and now the council has suspended the HGV drivers’ union rep, Pete Randle. They accuse him of gross misconduct, bogus charges that are designed to bring about his sacking. The striking drivers have now voted overwhelmingly to continue the strike into June.

The strikers have protested outside council headquarters earlier in March. The scabbing operation and the suspension of Randle are a calculated assault on workers’ pay, conditions and organisation. They must not be allowed to succeed.

The striking drivers want a market rate supplement to bring their low pay rate up to par with other workers in the same circumstances. It would cost just £300,000 to do this. Instead the council has spent £2.9 million to pay for the scabbing operation. Meanwhile the council pays out huge salaries and golden handshakes. For example, a former deputy chief executive received £573,660 in salary in 2019-20 whilst a retiring head of finance got a handout of £450,000.

This is the reality of Starmer’s Labour Party, an enemy of the working class.