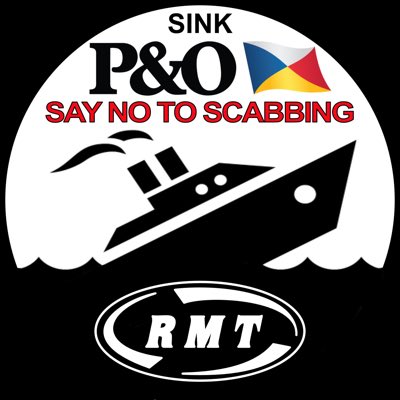 Working class solidarity was on display at ports around the country today, after P&O Ferries callously sacked 800 workers without notice by video call and replaced them with cheap scab labour hired through Malta-registered agency, International Ferry Management.

In an act of inhumane callousness, not to mention brand reputation suicide, employees were told “your final day of employment is today”, in the video call, recorded by head of employee relations Stephen Nee, who informed workers that they were to be dismissed “on grounds of redundancy” and that ferries will be crewed by cheaper agency workers.

Seafarers’ union, Nautilus International, announced that it would employ “its full resources” to support employees, and the RMT called the sackings “one of the most shameful acts in the history of British industrial relations”.

The RMT reported that security guards with handcuffs were boarding ships to remove crew and calls for mass mobilisation against the company.

RMT General Secretary Mick Lynch said: “We are receiving reports that security guards at Dover are seeking to board ships with handcuffs to remove crew so they can be replaced with cheaper labour.”

“If this happens at P&O it can happen anywhere and we are calling for mass trade union and wider public mobilisation and protest against the company.”

The RMT are right. Never mind fire and rehire, this is fire and cheap agency staff! P&O clearly hope to avoid having to renegotiate terms with staff and unions. They clearly have no intentions of meeting their legal and moral obligations to consult and treat workers fairly, and this has already come back to bite them with even the Church of England calling their behaviour immoral.

The ACG stands in full solidarity with the sacked workers, and we have already taken part in the protests at ports. ACG Kent comrades attended the RMT demo today in Dover, where about 200 people turned up at short notice. Tory MP Elphicke, reading the public outrage, showed her face, but was heckled by angry protesters.

We warn all workers that what bosses get away with against some today will be visited upon us all tomorrow, and we warn all bosses that an injury to one is an injury to all.

We can’t rely on crocodile tears from politicians to defeat P&O.  The only chance we have of defeating them is through pickets, blockades, and other direct action sanctions that may present themselves.