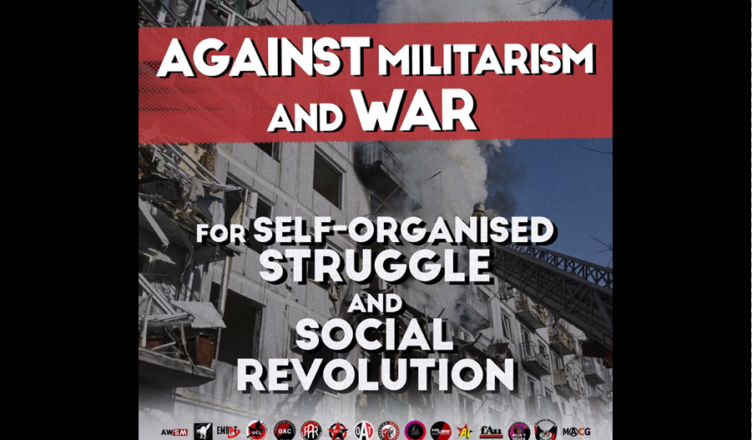 Against militarism and war – for self-organised struggle

The following international statement has been signed by 17 organisations around the Anarkismo coordination, which includes the ACG.

A proclamation by Russian President, Vladimir Putin, gave the green light for Russia’s military invasion of Ukraine. Putin claims that Russia’s act of war against Ukraine is aimed at supporting the Russian-occupied Crimea and the Donetsk and Lugansk People’s Republics in Ukraine, which is flirting with NATO membership at Western instigation. On Tuesday, 22 February, Russia recognised the independence of its informal protectorates in Donbas, exacerbating existing tensions with the Euro-Atlantic axis that supports the Ukrainian regime.

It should not be forgotten that a low-intensity civil war has been going on in Ukraine since 2014, when the then pro-Russian government of President Yanukovych was overthrown by an ‘Orange Revolution’ that brought to power a pro-Western regime willing to side with the Euro-Atlantic axis. The Euromaidan, from which the Western imperialist bloc benefits, took Ukraine out of Russia’s sphere of influence. It also strengthened the Ukrainian far right, which gained seats in parliament and developed paramilitary units that committed atrocities against Russian-speaking people and members of trade unions.

Russia, on the other hand, was not prepared from the outset to lose its imperialist foothold in Ukraine and especially in the Crimean region, regardless of the will of the Ukrainian people. The Euromaidan uprising may have resulted in the neoconservative regime that it ended up with, but there is no one who is under any illusion that the non-acceptance of that regime came out of Russia’s ‘anti-fascist’ sentiment or its ‘need to protect Russian citizens’. After all, Putin’s authoritarian regime in Russia has rewarded Nazis and fascists inside the country by imprisoning and killing anti-fascists, while the numerous interventions of Russian imperialism in areas of the former USSR needed no such justification. Russia wanted and still wants one thing: to impose its own terms in the evolving imperialist antagonisms. It will not tolerate the military encirclement it claims it is being subjected to by NATO, the installation of nuclear weapons on its doorstep, the Western inducement of Ukraine to join NATO, the attempted energy blockade of its gas supplies to EU countries and the reduction of its control over the former Soviet periphery. Another factor is the blatant nationalism within Russia’s ruling class – Ukraine is where the origin of the russian state (the Kievan Rus) lies and the eastern part of Ukraine is inhabited by Russian-speaking Ukrainians. That is if not by the irredentist doctrine of the All-Russian nation Ukrainians (together with Belorussians) are seen as a part of the Russian nation.

On the other side, the US and the Euro-Atlantic camp, with the UK prominent, are pushing in violation of international agreements for the eastern expansion of NATO, the exertion of economic and energy pressure on Russia in favour of US liquefied natural gas (LNG) and control of the Arctic trade route, which is opening up with the melting of the ice due to the destructive effect of capitalism on the natural environment and ecosystem. Both Russia and the US are trying to export their internal crisis abroad, while attempting to cause shifts in the global imperialist hierarchy.

Russia has amassed some 200,000 troops on the border with Ukraine. The Russian army is pounding the entire Ukrainian territory with bombardments. At the time of writing this statement, it is attacking mainly from Crimea, Lugansk and Kharkiv. The first casualties of the imperialist war are a fact. There is already talk of civilian casualties. The Ukrainian Government, which, let us not forget, is an amalgamation of neoliberals and neo-conservatives, has declared martial law throughout the country. We are still at the beginning of the horrors of war…

The only losers from the war are to be the world working class, especially the proletarians of Ukraine and Russia. They are the ones destined to be the cannon fodder of the states and the capitalists.

The imperialist war is being waged for the sharing of spheres of influence, energy routes and the rearrangement of geopolitical power. We have no interest in fighting for the interests of the powerful, for the interests of capital. Moreover, the outbreak of war is expected to bring further price increases and inflation in both energy and basic commodities, putting even more strain on the pockets of those who are already unable to meet their basic needs. We must not forget that war is a solution of capital to overcome the structural crises of over-accumulation from which capitalism is periodically afflicted. The destruction of fixed (means of production) and variable capital (labour power) paves the way for capitalist reconstruction and development.

Our revolutionary and class duty dictates the organisation and strengthening of the internationalist, anti-war and anti-imperialist movement of the working class. The logic of more aggressive or more progressive imperialism is a logic that leads to the defeat of the working class. There can be no pro-people’s imperialist road. The interests of the working class cannot be identified with those of the capitalists and the imperialist powers. The sabotage of the war machine, the organisation of the class and internationalist anti-war movement and the strengthening of the social and class struggles in the direction of the world social revolution for the construction of a libertarian communist society are the urgent and historic tasks of the oppressed and exploited everywhere. We cannot and must not settle for mediocre and detrimental arrangements.

The workers, the unemployed and the youth have no reason to go to war for the interests of the ruling class. Let us be aware of our social position and our class interests. Let these be the indicators of our attitude and action and not the belligerent, orderly and nationalist rhetoric promoted by the bosses and the propaganda media they control. We will not pay for the crisis of the capitalist system with our blood. We will not kill each other with the poor devils of other countries. On the contrary, it is our duty to block the war machine and to rebuild the social and class resistances, with the promotion of the class interests and the material needs of the social base as our guiding principle. To organise ourselves in the social and class formations of the working class, organising the counter-attack of our class in mass and militant terms. This system gives birth to wars and is responsible for poverty, injustice, exploitation and oppression. It is therefore time to challenge it in an organised and dynamic way, organising its overthrow on an international scale.

NO WAR BUT CLASS WAR!

NEITHER NATO NOR MOSCOW!

CLASS AND INTERNATIONALIST SABOTAGE OF THE WAR MACHINE!

AGAINST MILITARISM AND WAR: FOR SELF ORGANIZED STRUGGLE AND SOCIAL REVOLUTION!