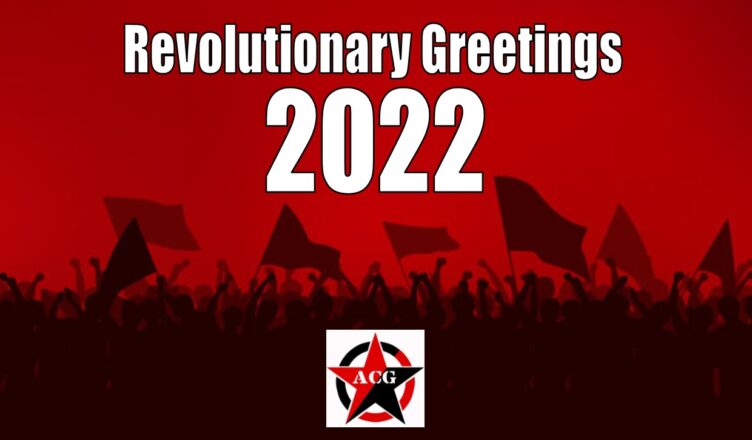 The Anarchist Communist Group sends its revolutionary best wishes and solidarity for 2022 to all our supporters, readers of our website and publications, and to all those who we have collaborated with in various activities over the past year.

The bad old days must end

These are dark days indeed but we remain cautiously optimistic that things can start to change for the better. But any possible change will require a degree of commitment to working towards making this happen. That means greater involvement in social and political struggles, whether as members of the ACG or as workers with revolutionary views outside of the ACG. The point is, we help to build those struggles and work together with others with compatible aims. It also means spreading the revolutionary idea that fundamental change will only occur when the wider working class has the political will to discard the ideology of capitalism and make that necessary transformation to a better world.

However, if we look at where we are now and where we want to be, then this is undoubtedly a tall order. We are living under the shadow of Covid, with the omicron variant causing yet another threat, and with a UK government that places business and profits over public health and protecting the most vulnerable. Humanity and the very planet we live on is also threatened by climate change and the destruction of the environment, a destruction mostly brought about by the continuing use of fossil fuels by industrial capitalism in the name of profit.

We live in a time of increasing poverty. The charity, Oxfam, pointed out that “the world’s richest 1% have more than twice as much wealth as 6.9 billion people” and “almost half of humanity is living on less than $5.50 a day.” According to Action Against Hunger, “around the world, we produce more than enough food to feed the global population – but more than 810 million still go to bed hungry every night.” The effects of the Covid-19 pandemic, and the damage done by corrupt, self-serving, inept and ideologically-driven political leaders acting in the interests of the capitalist class, has only increased this misery.

Here in the UK, the Child Poverty Action Group notes that “there were 4.3 million children living in poverty in the UK in 2019-20.” And that last statistic was from before the impact of the Johnson government’s brutal £20 Universal Credit cut and before the massive increases in gas and electric bills.

We have a benefits system that mainly subsidises bosses who are paying poverty wages that working people cannot possibly live off; a benefits system that goes straight into the pockets of unscrupulous money-grabbing landlords charging extortionate rents (often paying off their own mortgages in the process). And for those “lucky” enough to be in work, many are on increasingly precarious contracts and zero-hours is often standard. For those younger people just entering employment, then zero-hours is generally the rule. Meanwhile, for those who have been around a bit, and have half-decent contracts, pay and conditions, then the bosses’ drive to fire-and-rehire on worse terms and conditions is all the rage.

And let’s not forget the legacy of the whole Brexit shambles, the subsequent rising prices and occasional scarcity of goods, the increase in levels of racism, the rise in right-wing populism and the potential for going back to “the troubles” in the north of Ireland.

But just to make it that little bit harder to fight all this misery, we now have the Johnson regime’s Police, Crime, Sentencing and Courts Bill well on its way to becoming law, plus the Nationality and Borders Bill, as well as several other draconian bills based on pure state repression and racism. So in this way, even peaceful protest and civil disobedience could now land people in jail for a long stretch.

Meanwhile Her Majesty’s Most Loyal Opposition in the form of Sir Keir Starmer’s Labour Party seems to have pretty much missed all this draconian stuff, being far too focussed on purging the party of any remotely left-wing and Corbynite remnants to make a fuss over any Orwellian and authoritarian policies from the Johnson clique. The increasing criminalisation of protest does indeed make any resistance more difficult.

But fight we must!

Because it’s what we do! As Bertolt Brecht once said, those who fight can sometimes lose… but those who don’t fight have already lost. However, as the level of class consciousness is generally low, this fight needs to be partly educational. That means spreading and reinforcing the idea that, as working or unwaged people, we have nothing in common with those who rule us, of whatever political stripe; that we have nothing in common with those who employ us and ultimately profit from our labour. Fundamentally, we have to rely on ourselves and each other as working class people, and not trust intermediaries or representatives to do things for us.

But it’s one thing to write and talk about such pro-working class and pro-revolutionary views… and another for people to take any notice. So all such ideas need to go hand-in-hand with practical and direct action. Working class action, struggle, fighting together and rising together will be the true university of revolutionary ideas.

In spite of the low class consciousness in the UK, we have seen a flurry of strikes and other industrial actions, often by smaller non-TUC unions such as UVW, IWGB, CAIWU and IWW, as well as by members of the more established trade unions. And many of these actions have been successful, with direct action getting the goods. We also saw the emergence of the Black Lives Matter movement, the toppling of the Colston statue in Bristol, the people of Pollokshields preventing deportations, protests against violence against women, demonstrations against the Police Bill, plus numerous protests over climate change and at the COP26 conference.

In 2022, it’s essential that we continue to challenge any impact from the Police Bill, but this will most likely be as part of other campaigns and activities in which the law is applied to prevent protest or dissent, or as part of a wider ‘right to protest’ movement.

In the workplace, we need to be building strong rank and file initiatives, building power from below; whether that is as members of mainstream TUC unions or as members of the smaller independent unions. We need to help to build campaigns against fire and rehire and to tackle the normalisation of zero-hours contracts, and maybe even drag the big unions, screaming and kicking into a fight against the anti-union laws.

We need to be involved in or helping to build grassroots anti-poverty campaigns, such as those fighting for the reinstatement of the government’s £20 Universal Credit cut; we should be helping to set up local tenants’ campaigns against unscrupulous landlords, and fighting for affordable housing; working with others to organise a general campaign to oppose the rises in gas and electricity prices and to fight fuel poverty.

With regards Covid 19, we encourage involvement with the No Safety No Work campaign to protect worker safety. We also encourage involvement with the various migrant support organisations and campaigns – whichever of these is more active in your locality. Likewise with climate change, it is worth being involved in any climate action initiatives near to where you live.

Obviously, we’re not suggesting that you should be involved in every single campaign! The last thing we want to see is good people burning-out. So choose what you can do realistically, do what you feel most strongly about, and what (in your locality) has the most scope for meaningful and self-organised activity. Then stick with that.

Remember, we’re not asking for super-activists, just for comrades who in their own small way (and given their own real time constraints) can help towards building the resistance. Nor are we looking for people to submerge themselves into a particular campaign or single issue. Remember, it’s not only about solidarity, it’s also about spreading revolutionary ideas within the class, and if there’s no scope to do that, then you’re really just doing radical social work.

Get involved with the ACG

So to help you from falling into the “radical social work” trap, we encourage you to join (if you haven’t done so already) the Anarchist Communist Group! The ACG believes that, while we need to be involved in social struggles like those mentioned above, we also see the importance of the political struggle to help bring about a wider and more deep-rooted class consciousness within the working class and to build a strong national (and international) class struggle anarchist communist movement that is dedicated to the eventual overthrow of capitalism and the State.

Right now, we’re a long way from building such a movement, but involvement in social struggles and joining the ACG in 2022 can take us a few baby steps further.

So here’s to a revolutionary New Year for 2022! Let’s build a movement together!