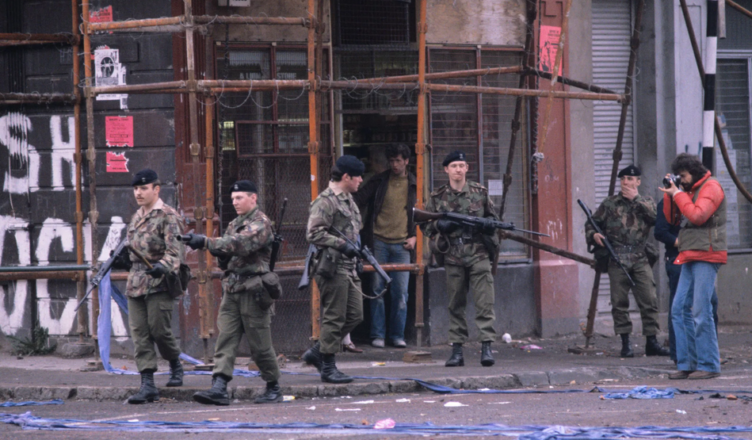 In this short series, we look at some of the devious and appalling things that the British State has tried to conceal.

When the British Army moved into Northern Ireland in 1969 with the ‘Troubles’, it was stymied for gathering information. It initially had to rely on the Special Branch of the Royal Ulster Constabulary (RUC). As the RUC was most unwelcome in working class Catholic areas, it itself was hampered in its intelligence gathering. The British Army then eventually had to set up its own intelligence gathering, as did MI5, in 1972. The SAS (Special Air Service) also employed its brutal ways of operating.

At first the IRA was easy to infiltrate, because of lack of security awareness, lack of discipline and its unified structure. However soon the IRA improved its own counter-intelligence, and the new cell structure and awareness of bugging devices and surveillance operations hindered further attempts at infiltration to some extent.

The different intelligence forces of the RUC, British Army (through its Force Research Unit – FRU), SAS and MI5 operated with no coordination but all of them used informers to ambush and murder people. These operations were later condemned by the European Court of Human Rights. For its part, the IRA used both kneecappings and executions against those they believed to be informers, sometimes mistakenly so.

All of these agencies cooperated with Loyalist paramilitaries to murder republicans. One of the most notorious of these was Gary Haggarty, a member of the Ulster Volunteer Force (UVF). In January 2018 he was sentenced to six and a half years imprisonment after admitting to over two hundred crimes which included five murders, 23 charges of conspiracy to murder, and many charges of assault, arson and kidnapping. Even this light sentence came to nothing, as he was released after four months!

For its part, the FRU recruited Brian Nelson who was deployed to infiltrate the Loyalist Ulster Defence Association (UDA). The FRU also deployed the unknown agent, code name Stakeknife, to operate inside the IRA. Stakeknife is generally thought to be Freddie Scappaticci.

Nelson passed on information about republican activists to British security services to the loyalist paramilitaries. One of those targeted was the solicitor Pat Finucane who defended republicans in court. He was gunned down in front of his wife and children. Nelson later pleaded guilty to 20 charges, including five of conspiracy to murder, and received a ten year prison term. Later David Cameron failed to fulfil a government promise of an investigation into Finucane’s murder.

Stakeknife was paid £80,000 a year by the British government, working originally with the RUC and then the FRU. He commanded the Provisional IRA’s internal security unit, known as the ‘Nutting Squad’. It regularly kneecapped and murdered those believed to be informers. In 2018 Scappaticci was arrested on charges of kidnapping, torture and murder but was released on bail. Later in the year he was sentenced to three months, suspended for a year, for being in possession of extreme pornographic images. A former FRU operative under the false name of Martin Ingram was to claim that the FRU killed people who might have fingered Scappaticci as an informer.

Tom Oliver was a farmer over the border from Northern Ireland in the Irish Republic. The Nutting Squad horribly tortured him and then murdered him with six shots to the head in 1991. There is no evidence that he was an informer despite the IRA using this as a justification for his murder. In fact, local IRA volunteers were strongly opposed to Oliver’s murder. It is alleged that Oliver was murdered to protect Stakeknife’s role as an informer.

More than 30 lawsuits are currently pending against Scappaticci, including over the kidnapping and torture of Margaret Keely. Her solicitor Claire McKeegan stated: “She was kidnapped and tortured by an agent of the State, Frederick Scappaticci, and deserves to get justice and accountability at long last. At every turn the PSNI (Police Service of Northern Ireland) and MoD (Ministry of Defence) have attempted to delay these cases being heard in open courts.”

The British security services thus regularly sanctioned kidnappings, torture and murder to protect their informers. In 2016 Operation Kenova was set up by the PSNI and is headed by a former chief constable of Bedforshire, Jon Boutcher. Its remit is to investigate ‘whether there is evidence of the commission of criminal offences by the alleged agent (Stakeknife), including but not limited to murders, attempted murders or unlawful imprisonments’ and into ‘whether there is evidence of criminal offences having been committed by members of the British Army, the Security Services or other government personnel’. Whether this turns out to be a valid investigation rather than another whitewash remains to be seen, but don’t hold your breath.