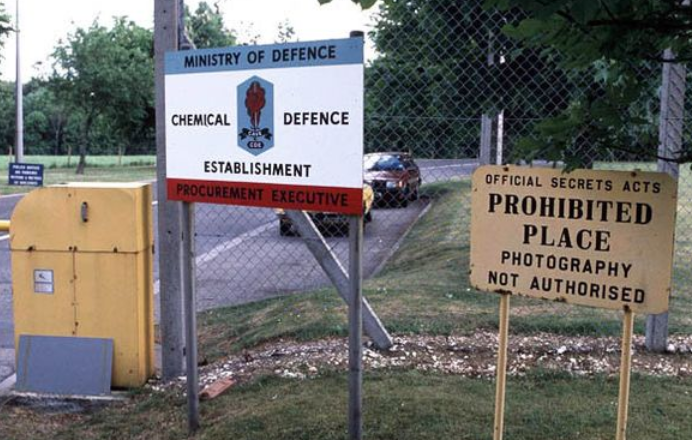 In this short series, we look at some of the devious and appalling things that the British State has tried to conceal.

The Ministry of Defence used large parts of the UK as a laboratory to carry out secret germ warfare tests. Some information about these did trickle out and a sixty page report released in 2002 revealed more, as did further research by Professor Ulf Schmidt of the University of Kent in 2015.

These experiments were carried out between 1940 and 1979.

Both microbes and chemicals were released into the atmosphere and military personnel involved in carrying this out were briefed to tell anyone who inquired that what was being undertaken were research projects into air pollution and the weather.

In fact, scientists at the germ warfare centre at Porton Down were carrying out tests in line with the Cold War against the Soviet Union and it satellites.

Between 1953 and 1964 military planes flew from north east England along the south and west coasts to the tip of Cornwall. They dropped large quantities of zinc cadmium sulphide on the population and it drifted miles inland. On another occasion, a generator was towed along a road near Frome in Somerset and released large amounts of the chemical for an hour. Cadmium was also spread from ships. Around 4600 kilos of cadmium was released through these methods. Schmidt later revealed that military aircraft had dropped large quantities of cadmium on Salisbury in Wiltshire, Cardington in Bedfordshire and Norwich in Norfolk.

Cadmium is known as a cause of lung cancer and was considered as a chemical weapon during World War Two.

Between 1961 and 1968 more than a million people along the South Coast, from the New Forest to Torquay, were bombarded with micro-organisms including e.coli MRE 162 and bacillus globigii (BG), which simulates anthrax. These were spread by a Royal Navy ship, the Icewhale, which sprayed the germs over a five to ten mile radius.

Between 1971 and 1975 American and British scientists sprayed large amounts of the bacteria serratia marcescans, as well as another anthrax stimulant and phenol in south Dorset.

Similar tests were earlier carried out between 1952 and 1964 when bacteria were spread on the London Underground at lunchtime along the Northern Line between Colliers Wood and Tooting Broadway. It spread in a ten mile radius. Other such tests were carried out in underground tunnels beneath ministry buildings in Whitehall. In further tests revealed in 2015 scientists spread BG throughout the London underground network in May 1964. BG is now regarded as a source of food poisoning, eye infections and even septicaemia.

There were also the infamous anthrax tests on the deserted Scottish island of Gruinard which left it uninhabitable until well into the 1980s. Similar tests using anthrax and other deadly microbes were carried out on ships in the Caribbean. In 1954, clouds of the Venezuelan Equine Encephalitis viruses were released in an area of sea near an uninhabited island in the Bahamas. These micro-organisms cause high fever, long term fatigue, headaches and sometimes death.

In Nigeria, then another colony of Britain, nerve gas was tested over a period of 15 months at Obanaghoro, in the south of the country. It is not known how the local population was affected. Schmidt noted that “The government records I’ve been looking at are conspicuously silent on all this. Officials had clearly good reasons as to why the kind of experiments undertaken in Nigeria were strictly prohibited on the British mainland, which is why the files and photographic records surrounding Britain’s post-war nerve agent testing in Africa were regarded as particularly sensitive.”

A test using a cloud of live bacteria took place off the west coast of Scotland in 1952. At one point a fishing vessel passed through the infected zone. This test took place just a few miles from the Hebrides, with a population of several thousands. The scientists bet on the wind normally blowing from the coast. If the wind had changed, it could have resulted in massive infection of the Hebridean population.

In addition, in tests carried out between 1964 and 1973 germs were attached to spiders’ webs in boxes to test how they would survive in different environments. These dozen tests took place in places including the West End of London, Southampton and Swindon. Other smaller tests took place between 1968 and 1977.

In 1997 the former MP for Teignbridge, Patrick Nicholls, told a special Commons debate that  in the village of East Lulworth in Dorset “Out of 22 families who grew up there, all the girls have gone on to have miscarriages or give birth to children with defects.“ One family in particular has seen an unprecedented degree of unexplained illness over the last 14 years. Each of their four daughters has had a miscarriage or given birth to a disabled child. “Babies have been born with missing limbs, afflicted with severe learning difficulties or started life with shrunken brains… It is the apparent failure to explain what was done that leads many people to believe these tests were responsible for a number of illnesses and birth defects.” In one family, a woman had a miscarriage, and then gave birth to a son with cerebral palsy. The woman’s three sisters, also born in the village while the tests were carried out, gave birth to children with various problems, as did a number of their neighbours.

The local health authority denied there was a cluster of birth defects, but the husband of the woman mentioned commented “I am convinced something terrible has happened. The village was a close-knit community and to have so many birth defects over such a short space of time has to be more than coincidence.”

Ulf Schmidt also revealed that 30,000 secret chemical warfare substance experiments were carried out, mainly at Porton Down, on more than 14,000 British soldiers between 1945 and 1989. He believes that, in most cases, the servicemen were not given enough information to allow them to give proper consent.