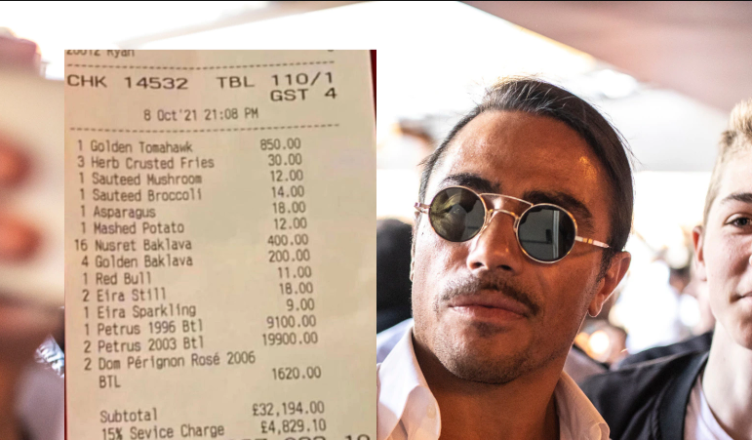 Nusret Gökçe, a Turkish cook and butcher became famous on the Internet a few years ago with shots of him flamboyantly sprinkling salt on meat going viral. He acquired the nickname of Salt Bae. Cashing in on the credulity and flaunting opulence of the upper classes, he opened a posh restaurant in Knightsbridge, where he charges £100 for a burger and £630 for a steak, £850 if the steak is wrapped in gold leaf! A Coke is £9, a Red Bull £11, whilst a single onion flower costs £18 and corn on the cob £12.This is in a borough – Kensington and Chelsea – where there are 20 food banks. Punters at the restaurant can end up forking out £30,000 for a meal. Despite all of this, the restaurant is fully booked for weeks.

Not far away, at local charity the SPACE, there are long queues for the food bank there. Reality TV star Gemma Collins, felt guilty about the £1,450 she spent on a meal with her boyfriend at Salt Bae’s, thinking she could remove that guilt by donating bags of her bras to charity!

Salt Bae is not content with just ripping off the rich. He does the same with his workers. At the Manhattan branch in the USA, he didn’t tell his waiters about the amount of tips they should have received. He pooled the gratuities, and took 3% off to put into his own pocket. When waiters began to investigate, he fired them. Now, after a court case, he had to fork out $230,000 to four waiters. He was also forced to post up a notice about workers’ rights in his restaurant.