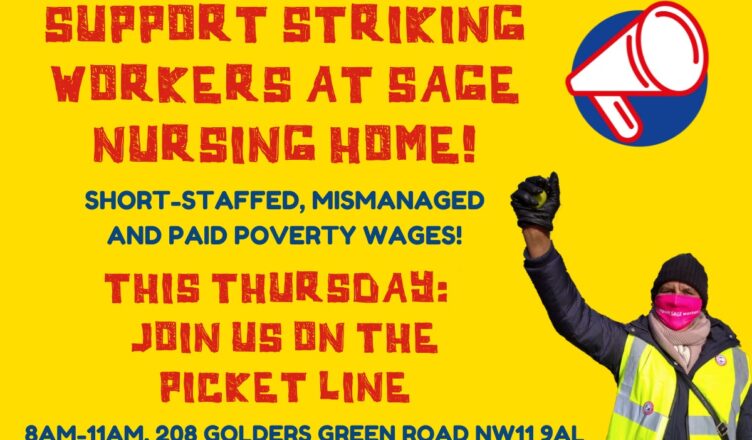 Carers, domestic, and maintenance workers at Sage (Service to the Aged) Nursing Home in North London are taking strike action, from October 20th. The following day, 21st October, the workers, organised in the grassroots union United Voices of the World, will mount a picket line on at Sage Nursing Home, 208 Golders Green Rd, London NW11 9AL.

Sage workers went on strike earlier in the year and thought that Sage Nursing trustees were ready to give a pay rise. Now, though, it appears they have not kept their word.

“We built a high profile campaign, supported by care workers around the UK, that led to strike action at the start of the year in the harshest of conditions during a global pandemic lockdown.

Yet Sage Nursing trustees not only failed to keep their word but they also continue to preside over a workplace that is short-staffed, mismanaged and where bullying, favouritism, and a blame culture is rife. They have tried every trick in the book to break us but our resolve is stronger than ever.” Bile, Sage care worker.