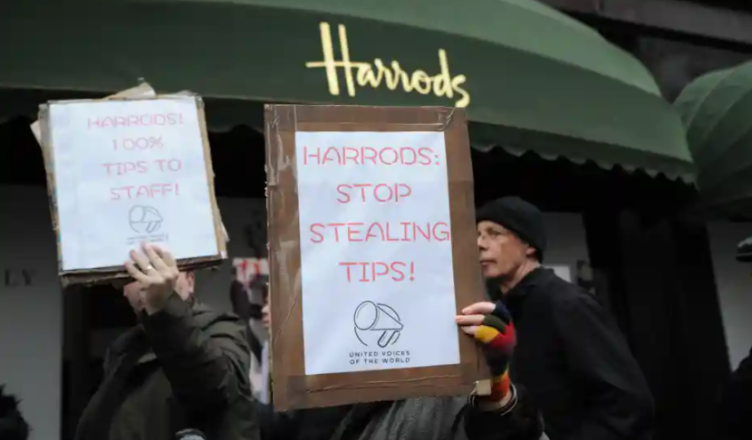 There is the possibility of strike action by restaurant staff at Harrods this Christmas. Restaurant staff are rightly demanding £12 an hour, plus commission and tips (they are currently paid £9 per hour). Harrods is owned by the Billionaire Qatari royals, who also own Canary Warf, the Shard, the site of the Chelsea barracks and the Olympic Village. If the strike goes ahead it will be the first ever strike by restaurant staff in the history of Harrods. The Qatari royals bought Harrods in 2010 for £1.5bn.

The Chefs and Waiters at Harrods are with the UVW union (United Voices of the World). UVW General Secretary Petros Elia has said the following:

“Our members work in the most famous luxury department store in the world, and yet they are paid poverty wages whilst generating millions of pounds in profit for their bosses. Our members are not willing to tolerate this any longer.”

A strike ballot will be conducted during Christmas week. UVW say unrest was partly prompted by a heavy workload for staff following job cuts. Qatar Holding, which owns Harrods on behalf of the Qatari royals, has refused to acknowledge the tough time currently experienced by the exploited and over-worked restaurant staff and refuses to take responsibility for the situation.

Back in 2017, a UVW organised disruptive and noisy protest outside the Harrods store, over bosses stealing the tips from waiters and chefs, managed to ensure workers got 100% of the tips. Let’s hope either the threat of strike action or strike action itself will force bosses to cough up £12 an hour this time.