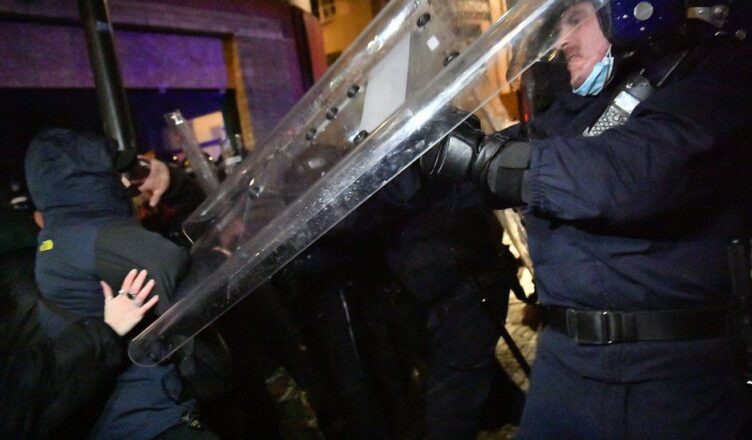 From the #KillTheBill: Bristol legal support in the streets fundraiser page

#KillTheBill: Bristol legal support in the streets and in the courts

**UPDATE: There have now been more than 60 arrestees from #KillTheBill protests in Bristol. Police raiding homes have used force to enter, and threatened a 16 year old girl with Tasers  before realising she was not the person they were looking for. Our injury support team have reported many more people who’ve been injured by police violence. If you can, please donate today and help us reach our stretch goal of £30,000 so we keep supporting people through the court process.**

People in Bristol standing up to unprecedented new police powers have faced immense police violence  since Sunday March 21st. The last week has seen police charging crowds with horses, releasing attack dogs on protesters, pepper-spraying people indiscriminately and physically attacking journalists. Those arrested will face harsh charges as the state seeks to make an example of them.

We believe that no one taking part in protests for social justice should face the system alone. If you do too, please donate.

Hidden behind the police statements branding demonstrators “a mob of animals” and the later-retracted claims of officers facing broken bones and punctured lungs, is the hard work of activists pushing for police accountability. Bristol Defendant Solidarity  (BDS) have been working for over a decade to support people facing police and state violence as a consequence for their activism. Now, we need your help.

We are aiming to raise an initial £15,000 with a stretch target of £30,000 to support people following Bristol’s #KillTheBill protests.

Avon & Somerset Police already have a long history of committing violence in our communities. The proposed Police, Crime, Sentencing and Courts Bill currently making its way through Parliament would give police sweeping new powers  to criminalise protests, intensify the attack on Gypsy, Roma and Traveller communities way of life, and increase the harsh effects of the criminal justice system with longer sentencing. And while people take to the streets to oppose it, the police have cracked down hard on the demonstrations.

Depending on need, and in this priority order, we will use this fund to support those targeted by police in connection with the Kill the Bill protests by:

• Supplying money for legal fees not covered by legal aid.
• Paying any travel costs to court.
• Covering loss of earnings sustained as a result of attending court.
• Supporting legal cases made against the police.
• Helping pay rent to ensure they can return to their homes after any custodial sentences.

In the unlikely event of there being any money left over from this, it will be held by BDS to support people in a similar way in the future. Solidarity is our best defence.