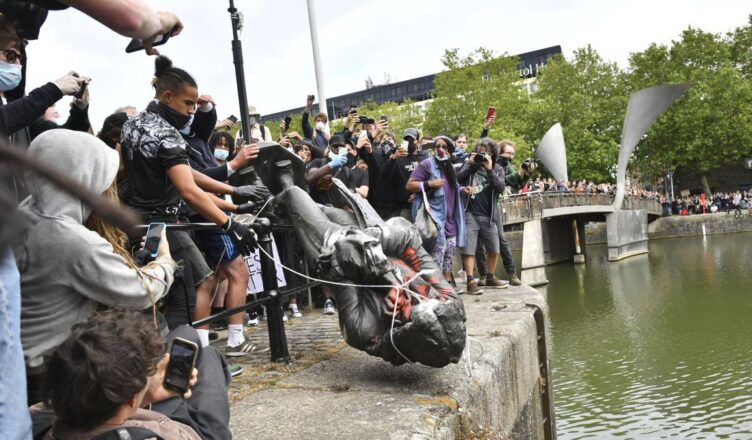 Adapted from the blog of Bristol Radical History Group

Over the last few years in arguments over the commemoration, celebration and memorialisation of slaver-traders we have been told many times that the so-called ‘traditions’ of Bristol must be protected. That is code for not changing anything; names of buildings, schools and statues, which are all part of the memorial landscape of Bristol created over the last couple of centuries largely by the merchant and business elite.

Well, there is another great historical tradition in Bristol, that is Bristolians acting together to destroy statues of their oppressors and institutions that oppress them. From the ‘mob’ who put out the eyes of a prominent slave trader in 1090, the crowds who pulled down the statue of George III in 1813 to those who added the cap of liberty to William III’s statue as fires raged in the Mansion House in Queen Square and the prisons in the 1831 uprising; Bristolians have a long history of sorting these things out, quickly, decisively (and whilst partying at the same time).

An eye-witness from BRHG said:

‘We’d wondered/hoped if Colston might fall on today’s BLM protest, and as our section of the crowd got close, clearly people were interested! We stopped and joined the crowd circling the statue. It was covered in a black shroud, and a couple of white guys were trying to pull it off, as others threw eggs at it. The shroud came off, and after a few failed attempts someone managed to climb to the top of the statue, just as a few ropes were being thrown at it – not string, but proper climbing-type ropes. Someone was well prepared! A couple of ropes were looped around Colston’s neck, perhaps now he knew how it felt? The crowd was roaring, the climber jumped down. “Stand back” people shouted! Surely it can’t be this easy we thought? But with what seemed like just a couple of tugs, Colston came down with a crash. People were jumping on the broken bastard. Utter pandemonium, and not a single cop in sight. Direct action does get the goods!

After the crowd made speeches from the empty plinth and had jumped up and down on the statue, the shout went out… “in the dock”… “in the dock”. After rolling it for a hundred yards across the centre, ropes were attached and it was dragged down to Pero’s bridge an apt location (the bridge is named after an enslaved African servant who lived in Bristol). To great cheers, Colston was dispatched to the bottom of the river.

One by one the Colston dominoes are falling. Young Bristolians are leading the way in remodelling the memorial landscape of the city. This is whilst politicians vacillate, apologists drag their feet and elite organisations like the Society of Merchant Venturers try to protect their image and save themselves by letting a person of African-Caribbean descent join for the first time in nearly 500 years! If we had to wait for this shower to do something we would be ‘kicking the can down the road’ for another decade or more.

Many protestors echoed the feeling of one who said:

…she saw the statue of Edward Colston everyday going to work and it made her feel that she did not belong to the City… that she was not part of the City. Now she said a weight was lifted off her back. She was proud of the Bristolians who were making history by their actions.

If pulling that statue down means young people can be proud and feel part of their city, then kick over the statues. We salute all those who had the courage to do this. And we must defend them to the hilt if the police come calling on the orders of Priti Patel.

The ‘toxic brand’ of Colston has been under assault for several years; the next question is when are the Colston schools going to change their names. As one counter-Colston protestor said “How is celebrating a mass-murderer good education?” What next for the ‘toxic brand’ of the Merchant Venturers who run these schools? And what next for the organisation and its sordid history…time to call it a day and disband?