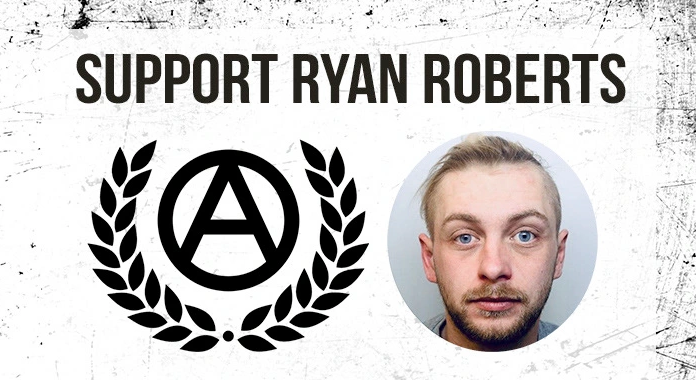 For his participation in the Bristol Kill the Bill demonstrations in March, during which police viciously attacked demonstrators, Ryan Roberts has been sentenced to 14 years in prison. Clearly, it’s one rule for the police, who got a pat on the back and lauded in the press for beating protestors with batons and battering them with the edges of their riot shields… and another rule for those who dared to resist the police violence, whether peacefully or otherwise.

Make no mistake, the State has a monopoly on violence, and anyone who dares to challenge this monopoly can expect little mercy from this rotten society, with a ‘justice system’ which exists first and foremost to protect the rich and powerful. But as the current far right populist UK government is keen to outlaw all forms of effective protest, what with the Police, Crime, Sentencing and Courts Bill, along with several other highly repressive pieces of legislation, then we have no choice but to continue to build and spread our resistance across the wider working class.

And alongside that resistance, we have to give solidarity too, with people like Ryan Roberts, and others also inside for resisting the system. With this in mind, we republish in full the statement from Bristol Anarchist Black Cross:

Ryan Roberts was sentenced on the 17th December 2021 at Bristol Crown Court to a total of 14 years in prison. He was convicted of riot and four counts of arson. Three of the sentences run consecutively and only one concurrently, hence the brutal sentence of 14 years. As it is over seven years, it means he has to do two thirds of the sentence. He will do just under a decade in prison.

The demonstration took place in March 2021 against the Police, Courts and Sentencing Bill. It was an outpouring of rage against the violence of the police. The crowd fought back after police officers attacked the crowd with batons and riot shields. Pepper spray was used indiscriminately, people were charged at with horses and hit over the head with batons and shields . The protesters fought back, seizing police riot shields, helmets and batons to defend themselves. By the end of the evening several police vehicles had been set on fire.

A growing number of people have been arrested and sentenced to prison, with more trials taking place throughout 2022.

The time is NOW for solidarity.

Organise where you are and show he is not alone!